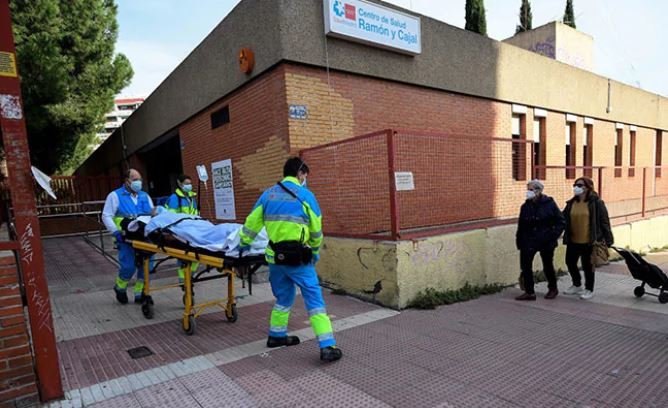 Someone In Europe Is Dying Every 17 Seconds From COVID-19, WHO Says

The cautious prognosis came after new diagnoses of the novel coronavirus slowed last week across Europe to 1.8 million cases, compared with 2 million the week before last.

Europe's painful second coronavirus wave may be starting to ease, a top World Health Organization official said Thursday, as cases drop slightly even though over the past week someone on the continent died every 17 seconds from the virus.

The cautious prognosis came after new diagnoses of the novel coronavirus slowed last week across Europe to 1.8 million cases, compared with 2 million the week before last. Hospitals across the continent remain packed, a situation that sharply increases the chance that patients will die of the disease.

"There is good news and not so good news," said Hans Kluge, the WHO's regional director for Europe, at a news conference, describing the drop in new diagnoses as "a small signal, but it's a signal nevertheless."

European countries have been hit hard since October, with cases skyrocketing in the past month and a half. Hospitals started to overflow, forcing many leaders to impose strict lockdowns despite vows to try to avoid the economy-crushing measures of the spring. Cases and deaths per capita passed the United States in October and have continued to rise rapidly. Deaths increased by 18% last week compared with the week before.

"We are seeing increasing signals related to overwhelmed health systems, with reports that in France, for example, intensive care wards have been at over 95% capacity for 10 days," Kluge said. Swiss intensive care units are at full capacity, he said.

And as the weather continues to grow colder and flu season approaches, the challenges may increase even more. Kluge warned virus-struck European nations on Thursday not to dial back their lockdowns too quickly, saying that the small gains achieved by the measures could vanish if they threw open doors as rapidly as they did this spring after bringing cases down.

The WHO continues to believe that full mask-wearing would be as effective as a full societal lockdown, Kluge said - but mask-wearing in Europe remains below 60%, he said.

"Too often we have seen the negative impact of easing too quickly following an understandable will from policymakers to free the public from periods of stringency," Kluge said. "Too often as well, we have also seen how much these short political gains are quickly offset by the devastating impact of having to reinstall mandates shortly after they are eased."

Some of the worst-hit countries in Europe have seen significantly improved numbers after devastating spikes in recent weeks. The Czech Republic and Belgium - both of which were overwhelmed in October - have seen exponential declines in cases following weeks of exponential increases. Elsewhere, the growth of new cases has slowed. But many leaders are deeply fearful of declaring victory, especially since painful and unsustainable lockdowns are the main driver of the improved viral situation.

"At Christmas, the coronavirus will still be there. And people will not be vaccinated. We will still be dangerous to each other. We have to have the courage to admit it," Belgian Prime Minister Alexander De Croo told a Belgian broadcaster on Wednesday. "Christmas will not be the same at all."

In Germany, Chancellor Angela Merkel said this week that the number of new cases in the country is no longer growing exponentially after the closure of bars and restaurants and new contact restrictions that were brought into force at the beginning of the month. But she has still been pushing for further restrictions, warning that it will be a tougher winter, with the virus more "aggressive" in the colder months.

German infections are still nearly three times the government's weekly target rate, but a Monday meeting between Merkel and the heads of Germany's 16 federal states failed to reach a deal to tighten guidelines.

"We have to reduce the number of contacts even more so that we can achieve our goals," Merkel said after the meeting.

She will meet with state leaders again next week when they will again attempt to come to an agreement, and she said she hoped to give some guidance on the level of restrictions that would continue throughout the winter.

Germany recorded 22,609 new cases on Thursday, a slight increase in growth from 21,866 a week earlier. Schools have remained open during the new lockdown, and for the first time the majority of new infections are among high-school-age children, sparking new debates over school openings.

A small but vociferous protest movement has chafed at ongoing restrictions, with thousands gathering to demonstrate in Berlin on Wednesday as parliament voted on changes to infectious-disease legislation that makes it easier for the government to impose restrictions on drinking, social contacts and shop openings. Police used a water cannon to disperse the crowds.

Berlin Mayor Michael Muller said that he had visited the city's main hospital and that the situation was "depressing," with more than 1,000 coronavirus patients hospitalized across the capital, the highest number throughout the pandemic. He said that the health system can cope for now but that it is "becoming more difficult."

Oh ya 6 days ago
If the WHO is so concerned they should go visit Thailand and Greece and see what they are doing as their death rate is almost zero. But remember folks those selling the fear will be the same ones selling the cure
View all comments (1)Add comment