Orban Walks Tightrope On China Ahead Of Hungarian Elections

Amid what might be close elections in which Budapest’s warm ties with China are at issue, Prime Minister Viktor Orban’s government is suddenly trying not to appear overtly pro-Beijing.

With Hungarian Prime Minister Viktor Orban’s close relationship with Beijing becoming a target for the country’s opposition in a tightening election campaign, the government is now trying to distance itself from some of its more controversial China policies.

The new tack from Orban's government comes as Peter Marki-Zay -- a conservative small-town mayor who emerged as a unity candidate chosen by a coalition of opposition parties -- has come to represent what many say is the best chance to oust Orban in more than a decade.

In what is shaping up as a close race ahead of parliamentary elections in the spring, Budapest is adopting a new approach as Marki-Zay has pledged to shakeup the country’s warm relationship with China and take aim at Chinese-funded projects in the country.

“The Hungarian government is now silent about such China-related controversial issues and is trying to emphasize the bright side of [China-Hungary] ties, like the amount of Chinese investment flowing into the country,” Tamas Matura, an assistant professor at Corvinus University in Budapest, told RFE/RL.

Under Orban, who has held office since 2010, Hungary has built close ties with China.

Relations further expanded under the Hungarian leader’s Eastern Opening policy meant to cultivate close ties with Beijing and Moscow to attract investment and economic opportunities for the country.

Since then, Orban has opened the door to a series of controversial Chinese initiatives in the country -- including a Chinese-funded university in Budapest, a railway to Belgrade, and the procurement of Chinese ventilators and vaccines during the pandemic -- that have found themselves in the crosshairs of the opposition over debt and corruption concerns.

With polls showing Marki-Zay neck and neck with Orban’s Fidesz party, the opposition candidate has tried to push Orban’s controversial China-ties into the spotlight and called for a review of Hungary’s relationship with Beijing.


The opposition candidate has also accused Orban of corruption in negotiating the funding of the Budapest-Belgrade railway, where the government took out a 20-year, $1.9 billion Chinese loan, and vowed to stop interfering with the European Union’s efforts to censure Beijing over human rights concerns in Hong Kong and China's Western Xinjiang Province.

In Brussels, multiple EU officials familiar with the bloc’s China policies told RFE/RL that Hungarian officials have not voiced opposition to renewing sanctions against Beijing over Xinjiang, in large part due to Budapest wanting to avoid strengthening the opposition’s attempts to target Orban over his China ties.

Marki-Zay’s challenge has left the Orban government engaging in a high-wire act at home and abroad when it comes to its China policies.

This shift has been particularly felt in Brussels, where Hungarian officials have been willing to come to Beijing’s aid to court more Chinese investment and maintain diplomatic support over Budapest’s democratic backsliding, which has been the focus of repeated clashes between Hungary and the EU. 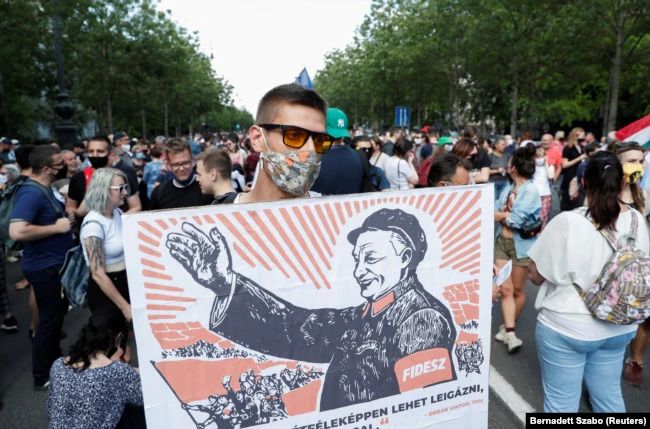 In April and May, Budapest was the only one of 27 EU member states to withhold support for punitive measures in response to Beijing imposing a national-security law on Hong Kong and have since blocked any future measures.

But behind the scenes in Brussels, EU officials familiar with the issue who were not authorized to speak to the media told RFE/RL that Hungary has thus far indicated it will not oppose the extension of the Xinjiang measures as it tries to avoid the appearance of cozying up to China amid the close election cycle.

Hungary also increasingly finds itself as an outlier in Central and Eastern Europe over its relationship with China.

A new government in the Czech Republic has said that it will take a more adversarial stance toward Beijing and the incoming coalition in Germany has also called for reevaluating Berlin’s China policies following Chancellor Angela Merkel’s courtship of Beijing as a partner.

Several countries in the region also welcomed Taiwan’s foreign minister for a landmark European tour in October, while Lithuania has been involved in a tense spat with Beijing over the Baltic country’s ties with Taipei.

Those tensions look set to grow.

On November 21, China downgraded diplomatic relations with Lithuania over the opening of a Taiwanese office in Vilnius. In Brussels, meanwhile, the EU is working on new supply-chain due diligence and anti-coercion legislation that could also target China and fray ties with Beijing.

According to Matura, this leaves the Orban government in an awkward position as it looks to navigate rising anti-China sentiments among Hungary’s neighbors. 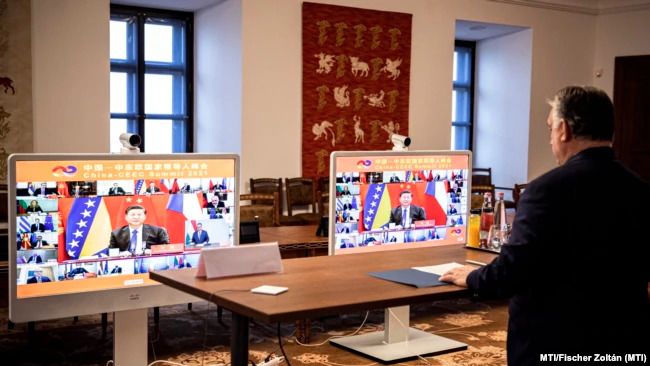 Viktor Orban at a summit between China and Central and Eastern European countries via video conference from his Budapest office on February 9.

“[This] may increase the importance of Orban in the eyes of China, since he is one of the last friends of Beijing in the whole EU,” he said. “Meanwhile, he can’t be very supportive of China in the middle of the campaign…so, I believe Orban has embraced a wait and see approach [for] now.”

Hungary’s Chinese-funded projects under Orban have been no stranger to scandal, but analysts say the central question for Marki-Zay ahead of the elections is whether it resonates with the electorate.

“There is definitely an attempt to bring China into the election campaign, but it remains to be seen if it will be successful,” Dominik Istrate, an analyst at the consultancy Kesarev, told RFE/RL.

Corruption concerns have followed the Budapest-Belgrade railway project since it was first proposed in 2014 and the government’s procurement of the Chinese-made Sinopharm vaccine has also been embroiled in controversy over high costs and graft accusations.

However, a plan to build a Budapest campus for Shanghai's prestigious Fudan University has received the greatest public pushback, with an estimated 10,000 people taking to the streets in the capital in June after leaked documents showed the government would take out a $1.5 billion loan from a Chinese bank to cover most of the costs. 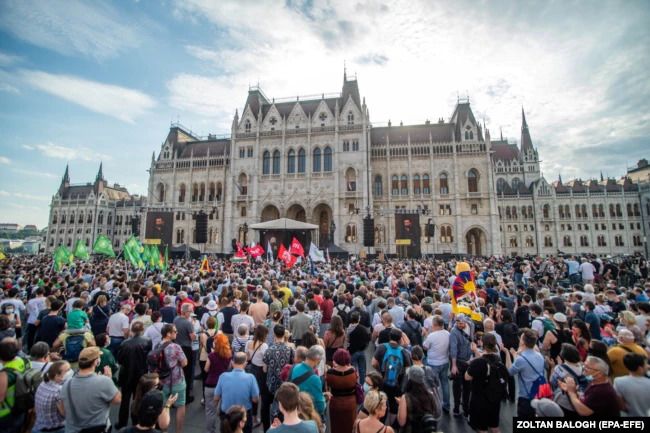 Demonstrators gather in front of the parliament in Budapest on June 5 to protest plans to establish a satellite campus for Shanghai’s Fudan University.

Orban has since said he will hold a referendum on the issue, but such a vote faces growing uncertainty.

The Fudan project remains unpopular with voters, with an August poll showing that more than two-thirds of Hungarians oppose the campus. Members of Hungary’s opposition -- including Budapest Mayor Gergely Karacsony -- are also pushing for a nationwide referendum on the campus that can be included on the ballot for the federal elections. But doing so currently faces several legal challenges that could delay it until after the 2022 vote.

While critical of the Chinese megaprojects that were green-lit under Orban, Marki-Zay has also looked to position himself carefully as not being anti-China. The mayor of the small city of Hodmezovasarhely has said that Chinese investment is welcome as long as it is on a “mutually beneficial basis,” and has said that he respects Beijing’s achievements.

The Orban government, meanwhile, has shifted its attention to other issues that may galvanize voters and define the elections.

Pro-Fidesz pundits have already stated that there will be “major U.S. interference” in the 2022 elections and have taken aim at Marki-Zay’s time living in the United States as evidence that he represents foreign interests.

The Orban government has also put forward its own referendum on current legislation that limits schools' ability to teach about homosexuality and transgender issues, which the prime minister has framed as part of an “ideological war” with the EU.