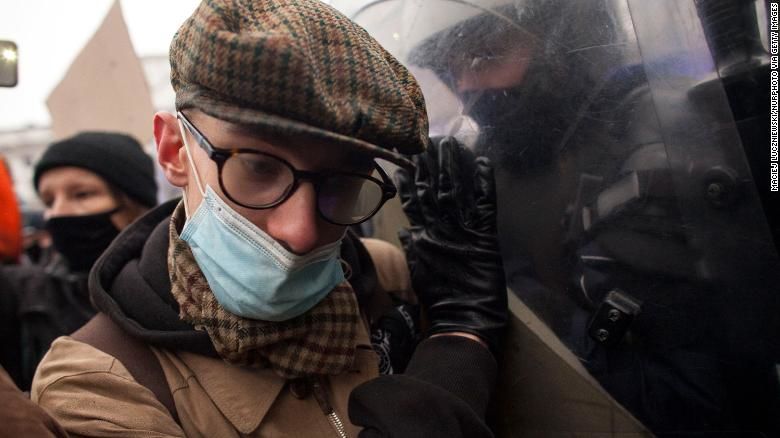 Analysis: European leaders seized more power during the pandemic. Few have 'exit plans' to hand it back

Hundreds of thousands of people have lost their lives across Europe due to Covid-19, and many more have suffered long-term ill health after contracting the disease. They're not the only casualties of the pandemic.

Democratic norms have also been seriously dented by a year of restrictions, and experts now fear power-hungry politicians could be reluctant to give up their near-total authority once the crisis is over.

In France, for instance, parliament approved a bill last week that extends the country's state of emergency until late September. The bill allows President Emmanuel Macron to introduce a health pass, showing whether someone has been vaccinated against Covid-19 or not, as well as curfews across the nation.

The move was seen as controversial by some of Macron's liberal allies: after all, instructing your citizens to be home by a certain time and tracking their medical information is hardly consistent with France's liberal traditions.

Over the course of his presidency, Macron has been accused of drifting from the centrist liberal platform on which he was elected in 2017, most notably taking a harder line on Islam and immigration to compete with his top political rival, the far-right Marine Le Pen.

It wasn't long ago that the French president was extolling the values of democracy. Speaking to the US Congress in 2018, he paid tribute to the "sanctuary of democracy" he was addressing and reminded the world of the words "emblazoned on the flags of the French revolutionaries, 'Vivre libre ou mourir.' Live free or die." Ironic, given the president's apparent eagerness to boss his citizens around to stop the spread of a deadly virus.

Macron's loosening relationship with democracy doesn't stop at tracking who's been injected and forcing people indoors. Throughout the pandemic, the president has reduced the role that his parliament plays in scrutinizing his policy announcements.

"Parliament's role in France is more limited under the new state of health emergency than before," said Joelle Grogan, senior lecturer in UK public and EU law at the University of Middlesex. "There is no obligation for governments and administrations to send copies of orders they adopt to parliament."

Democracy Reporting International (DRI) recently published a comprehensive study on how governments across the European Union had responded in the context of democracy and the rule of law. France was listed as a country of "significant concern" for the extent to which its government has subverted legal norms.

France is not the only EU nation that has backslid on democracy.

In Austria, Slovenia, Belgium and Lithuania to name a few, there is serious concern that governments have misused existing laws to restrict the liberty of citizens. In fact, DRI listed only Spain out of the 27 EU member states as a country of "no concern" when it came to parliamentary or legal oversight of Covid measures.

The most egregious example probably comes from Hungary, where the government passed legislation that allowed it to rule by decree with no judicial review.

Courts in Cyprus and the Czech Republic claimed to have no jurisdiction over coronavirus measures. This significantly reduced moves to safeguard any attempted government overreach.

A central concern of DRI's report is that few European countries have a clear "exit plan" for ending states of emergency and returning to normal ways of governance. 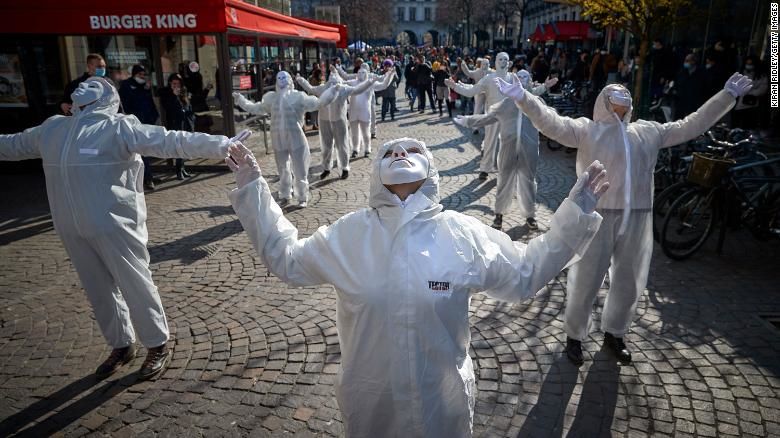 Anti-lockdown and anti-vaccination protesters demonstrate in Paris on the first day of a new four-week lockdown on March 20, 2021.

This is a real concern in the case of France. Phillippe Marlière, professor of French and European politics at University College London, notes that in recent years, France has introduced numerous states of emergency in response to terror attacks. Many of the measures introduced at these times concerning personal liberty have remained in place.

"I would bet that a lot of the illiberal measures that have come in under Covid, like the health pass and threats of curfews will remain in place or be seen again," he said. "Politicians are very good at taking authority but less good at handing it back."

There is particular concern among some that Macron, who is facing election next year, might see keeping a tight grip on power as advantageous.

"The French president has more power on paper than the American [resident. He can control the police, the army, all domestic policy, all foreign policy. He even appoints his own prime minister," said Marlière. "This, combined with someone seeking re-election who is already shifting to the right on issues like Islam with no real oversight is very concerning."

More worryingly, the DRI report also states that only five EU member states -- the Czech Republic, France, Lithuania, the Netherlands and Portugal -- have adequate exit strategies for a return to normal.

"It's far easier to govern by decree than to govern within limits, so it's obvious why leaders would want to hang onto powers," said Grogan, who also noted that undermining the rule of law has been a problem within the EU for some time. 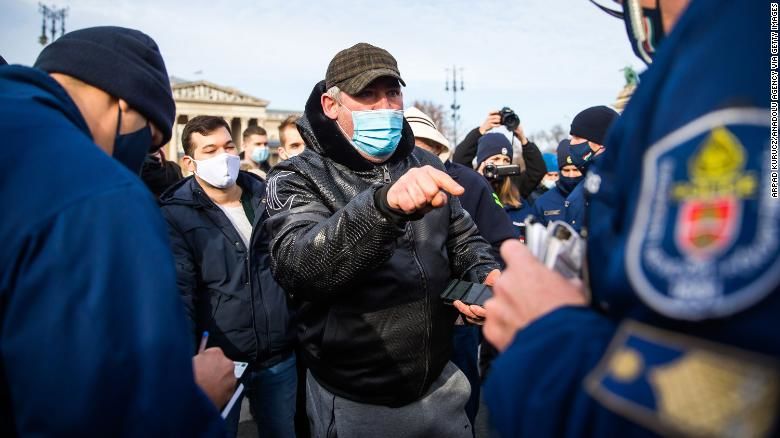 Police officers check a demonstrator during an anti-lockdown demonstration in Budapest, Hungary, on January 31, 2021.

In recent years, Hungary and Poland had both abused the rule of law to such an extent that article 7 of the EU's treaty, which, if approved by all member states, would restrict both nations' voting rights with the EU and restrict access to EU money, has been triggered against both.

The problem is that both Hungary and Poland are able to veto actions against the other, rendering the EU somewhat toothless. "What happens next is the big problem. We can talk about legal mechanisms and the laws. But ultimately we need political consensus," Grogan adds.

Last summer, Brussels tried to force Hungary and Poland to fall in line though a mechanism in the EU's long-term budget, but ultimately choked at the last minute and agreed a fudge in order to get the bloc's Covid recovery funds approved.

That was two member states. What happens when it's many more is a real unknown for the EU. 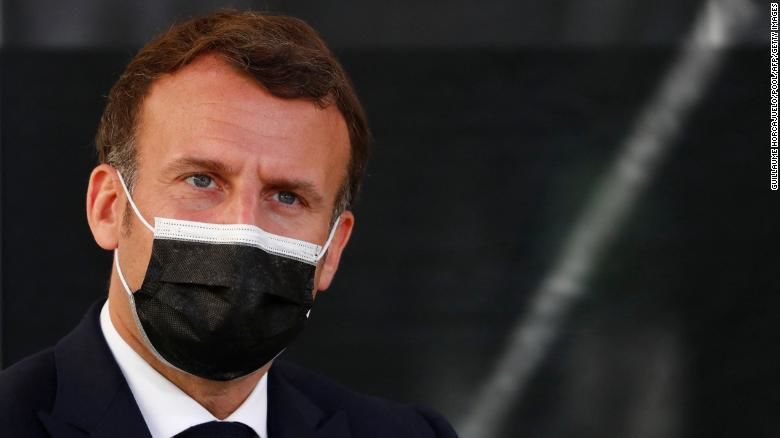 French President Emmanuel Macron has been accused of using the pandemic to grab emergency powers in France. 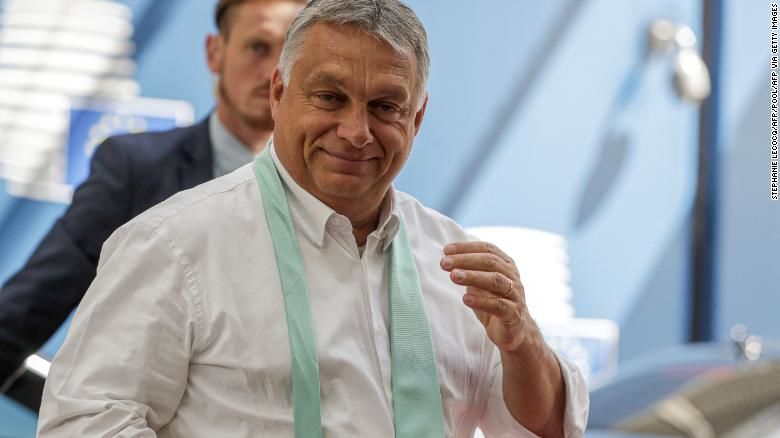 "Fundamentally, the EU is a legal structure. It exists to obligate mutual rights between states and citizens," said Grogan. "But it would be remiss to ignore the complexity beyond that. As Brexit proved it is a group of states deciding to be part of the club. Brexit showed us you can leave, but the problem is if someone doesn't accept the values and doesn't want to leave, it is legally impossible to remove a state."

Where this ends is anyone's guess. The EU is unlikely to fall apart, as many have predicted, but it is possible that Euroskeptics across the bloc can force changes that undermine the whole thing. And if you were looking for a way to destabilize the EU, making a mockery of the rule of law would be a good place to start.

"We're seeing, as usual with emergencies, a shift of power towards the executive with oversight from parliaments, judiciary and other bodies getting weaker," said Jakub Jaraczewski, research coordinator at DRI.

"The EU could work towards better legal oversight -- be it through the Commission, the Fundamental Rights Agency or even through the Court of Justice. But that would require political will from the leadership in member states for the central EU to take control of policy areas they prefer to keep close to their chests."

For the best part of a decade, member states bickering over precisely what Europe should be and how it should respond to crises has been the hardest thing for the EU to navigate. The disregard for law, however, is a more fundamental headache than disagreements on migration or how money should be spent.

When politics returns to something resembling normal, Brussels might find itself with more than just Poland and Hungary on the naughty step. And if these recent delinquents decide that their newfound powers matter more to them than keeping their EU neighbors happy, there is very little that EU grandees can do to stop the fallout destabilizing the whole bloc.