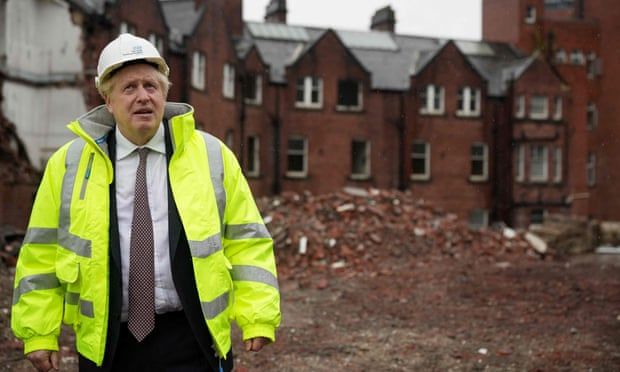 You can’t level up by raising taxes on the poor, Tories tell PM

A group of senior Conservative MPs has broken ranks to openly question how Boris Johnson can deliver on his promise to increase prosperity in poorer parts of the UK while at the same time raising taxes for working people and cutting benefits.

As the prime minister arrived in Manchester on Saturday night for his party’s first full conference since its thumping 2019 election win, Johnson insisted he was ready to take the “big, bold decisions on the priorities people care about – like on social care, on supporting jobs, on climate change, tackling crime and levelling up”.

But among Tory MPs, including some who won their northern or Midlands seats from Labour on the back of Johnson’s promise to “level up” the country, there was growing concern that tax rises and cuts to universal credit may fatally undermine their constituents’ trust in Johnson and his ability to deliver for people in more deprived areas.

Jake Berry, a former Tory minister of state for the northern powerhouse from 2017 to 2020, who now chairs the Northern Research Group of about 50 Conservative MPs in northern seats, told the Observer that the Manchester conference was a key test for Johnson and his stated mission to create a more equal country.

Berry, who opposed the recent announcement of a rise in national insurance from next April and the ending of the £20 universal credit uplift from this week, said: “The challenge for the government at this conference is to square the circle of how you can level up deindustrialised and poorer communities in the north of England while at the same time taking cash out of their pockets through a national insurance rise and cuts in universal credit.”

David Davis, the former cabinet minister and serving MP for Haltemprice and Howden, suggested the government itself was unclear what “levelling up” meant. “You don’t level up by increasing the tax and cost of living on the working class. We have to be absolutely clear what levelling up means. Do we mean that we are going to give better opportunities to the least well-off, or is it simply a programme to move and invest more outside London? Both matter but the first matters far more.”

Privately, many Tory MPs in northern and Midlands seats are using the phrase “southern privilege” to describe a gulf in living standards between north and south which they say most ministers fail to understand, as they have never experienced life outside their own prosperous neighbourhoods.

Stephen McPartland, the Conservative MP for Stevenage, agreed that his party risked repeating Labour’s fatal mistake of ignoring the communities they now represented.

“If we are really going to level up the country, we have to help those on the lowest incomes, not pull the rug out from under them as they are trying to get back on their feet, just to tidy a line up on a Treasury spreadsheet,” he said. “Our focus should be on people, not soundbites, which just undermine the levelling up agenda as the gap between the reality for people and rhetoric of politicians widens. Labour lost their support in these communities by ignoring them and we risk doing the same.”

On Saturday night, in a move that may be welcomed by the sports community but will probably be seen as a limited contribution to the wider challenge of levelling up, the government announced £22m in new funding for public tennis courts, and £30m a year towards improving and opening school sport facilities.

Andy Burnham, the Labour mayor of Greater Manchester, writing in the Observer, offers to work with the government to bring more opportunities and better services to the city, if ministers play their part in supplying funds.

“Alongside a London-style public transport system, I will also commit to removing 1 million tonnes of carbon from the Greater Manchester economy, retrofit thousands of homes and create thousands of decent jobs in the process. And, if we get the backing we need, I have no problem with being held to account by the government … for delivering what we promise and being called out if we don’t,” Burnham writes.

As the Tories gather on Sunday, new research by the Joseph Rowntree Foundation shows that 312,000 working-age families in the Greater Manchester area, about a quarter, will be hit by the £20-a-week cut in universal credit and working tax credit. The cut comes at as inflationary pressures are building from rising gas prices and the increasing cost of food. The Bank of England expects consumer price inflation (CPI) to rise above 4% in response to higher import prices.

Shevaun Haviland, director general of the British Chambers of Commerce, said ministers needed to work with firms to deal with the growing fallout from Covid and Brexit.

On Sunday, the first day of the Tory gathering, the bishop of Manchester, David Walker, will join a parallel conference run by the Manchester Cladiators, a group dedicated to getting a better deal for victims of the cladding crisis. About 15,000 people in the Manchester area have been affected since the Grenfell Tower disaster of 2017, leaving many with huge bills and homes they cannot sell.

Writing for the Observer, the bishop says: “To me, it seems plainly unjust that they should pay the price of other people’s mistakes, and as a bishop with over 30 years’ active involvement in housing associations, it feels like an injustice I want to do something about.”

He also questions the links between construction companies and the Tory party. “I struggle to believe that it is entirely coincidental that individuals and bodies connected with the construction industry have been such generous political donors and assiduous lobbyists in the years (too many already) since Grenfell went up in flames.”
#boris johnson  #johnson  #covid
Add Comment