Concerns about the city’s slowing economy, and continued restrictions to control the coronavirus could also deter buyers, property agents said.

The unrelenting climb in Hong Kong’s residential property prices has been seen as one of the surest bets over the past decade, with the exception of a brief slump in 2020 during the coronavirus pandemic.

The need to house a population of 7.4 million people, with little area available for expansion, and a general belief that property is a safe investment among many of the city’s residents has helped the housing market defy critics who say homes are overpriced, and push prices higher during three of the five interest-rate rise cycles since 1993.

However, the sharp increase in borrowing costs this year – four rate rises by the US Federal Reserve, so far, in a push to control inflation – combined with a slower-than-expected economic recovery in the city from the fifth wave of Covid-19 could pour cold water on the market, industry experts said.

Some homeowners are already selling their flats at deep discounts or losses, according to property agents.

“Due to the repeated outbreaks and the interest rate hikes in the United States, the pace of turnover for second-hand transactions has slowed down slightly, and some owners have also begun to face the reality and increase discounts,” said Wan Chan, chief district associate director at Centaline Property Agency. 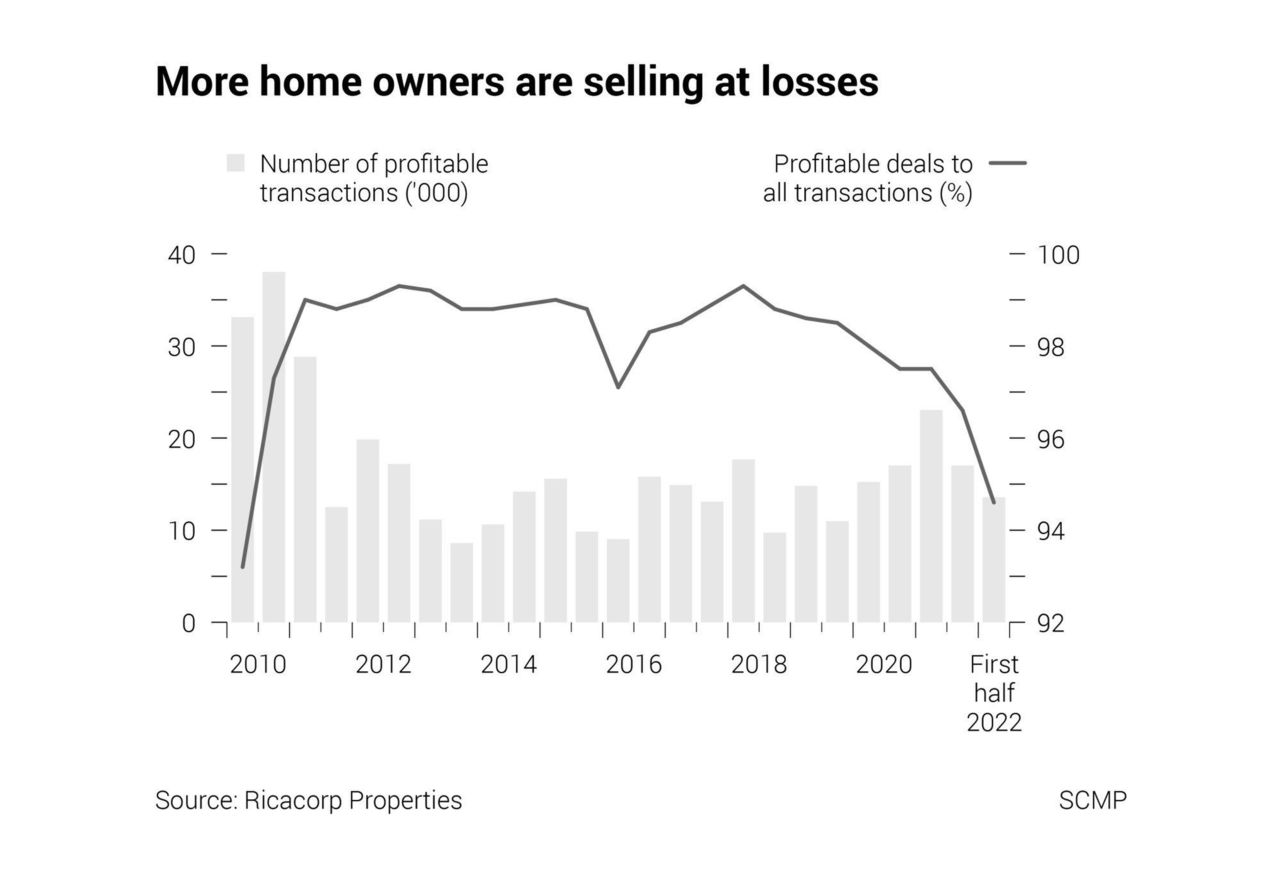 Last week, the Fed increased interest rates by 75 basis points for a second straight month as the central bank tries to control inflation, which topped 9.1 per cent in June and is well above its 2 per cent target.

The Hong Kong Monetary Authority (HKMA), the city’s de facto central bank, has moved in lockstep with the Fed in order to help maintain the peg between the US dollar and the local currency.

However, many property buyers have not seen the same level of increases in their mortgage rates as local lenders have kept the prime rate unchanged for the past four years.

“There will be some incremental strain on consumers as a result of the higher mortgage payments on their household debt,” said Standard Chartered CEO Bill Winters. “We’ll see that everywhere in the world, most specifically in the US. That is far from being a solvency concern at this point. I see no impact in the likelihood or repayment of mortgages.

“The reason that central bankers raise interest rates is to slow down economic activity in order to bring inflation under control. We will feel that in Hong Kong as we do everywhere else in the world.” 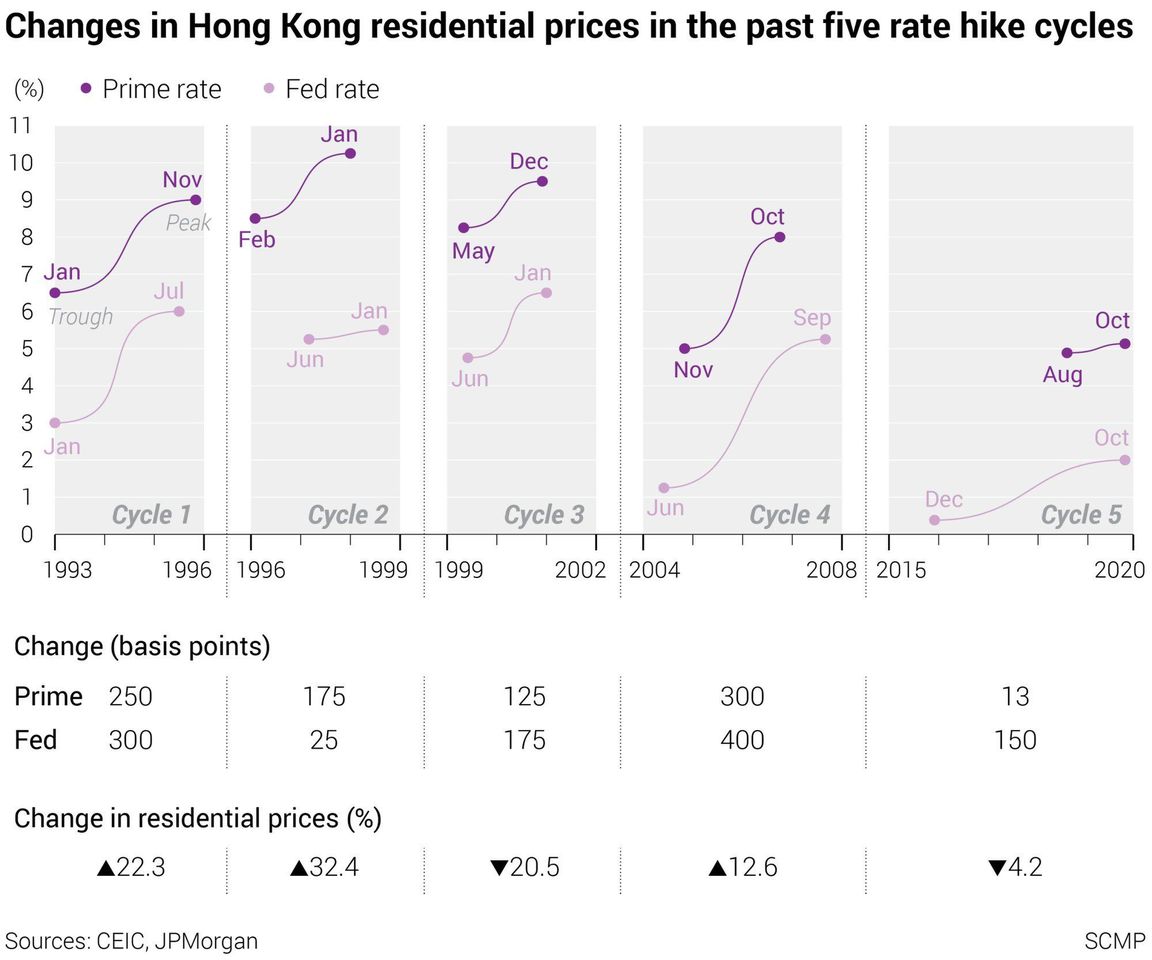 “If we think it is appropriate, we will make a change there. The prime rate has not historically changed much at all. Don’t hold your breathe,” he said. “Nonetheless, we will keep it under review.”

Ahead of the Fed’s decision, Financial Secretary Paul Chan mo-po told the Post that commercial banks in the city will have no choice but to raise their prime rates, but are not likely to do so at the scale and pace of the Fed.

Hong Kong’s property market has cooled in recent months amid buyers’ concerns about higher interest rates, as well as the economic outlook. Mortgage payments linked to the Hong Kong interbank offered rate have risen since March as the US has increased rates.

For example, a flat at The Mediterranean in Sai Kung measuring 566 square feet recently changed hands at a loss of HK$2.54 million, or 24 per cent of the original price, according to Century 21 Goodwin.

In isolation, higher interest rates are negative for home prices as they affect affordability and investment returns, according to Rita Wong, head of valuation and consulting, CBRE Greater China.

However, a combination of other factors, including weaker economic growth, higher unemployment and travel restrictions related to Covid-19, are likely to have a greater negative effect on prices, she said.

Hong Kong’s economy contracted by 4 per cent in the first quarter and Chan, the city’s financial chief, has warned that the government may have to cut its annual growth forecast for the second time in three months in August because of the weak recovery from the pandemic.

In the past two decades, real estate prices have actually increased twice during rate-hiking cycles, according to CBRE data. However, this time may be different.

“Those days were on the back of decent economic growth. This time round we are facing a far more challenging market fundamental,” Wong said.

“This time, the economy is only starting to recover,” he said.

One sign of the pressure on the property market is the Centa-City Leading Index, a gauge of lived-in homes compiled by Centaline Property Agency. It has dropped 6.2 per cent from a peak in early August of 2021, seven months before the US began increasing interest rates.

The decline came as a fifth wave of Covid-19 cases raged this spring, with an army of locals and expatriates leaving the city over coronavirus restrictions. There was lower investment demand as travel remained limited between mainland China and Hong Kong to stop the virus’s spread.

The drop in Hong Kong home prices, which started in 2021, is a reflection of the double whammy of anti-government protests in 2019 and the coronavirus pandemic in 2020 on the city’s economy, according to Albert Wong, honorary chairman at AA Horses Mortgage Brokerage Services.

Since 1993, residential prices in Hong Kong have risen in three of the last five rate-rise cycles with the effects of higher rates on prices being “not conclusive”, according to a JP Morgan research report.

The introduction of the Individual Visit Scheme that allowed mainland residents to visit Hong Kong or Macau without needing to be on business or part of a group tour helped fuel the jump in prices in 2004, according to Wong of AA Horse. Buying fever among mainland residents who snapped up properties in the city helped offset the rate increase, he said.

The International Monetary Fund has estimated that housing prices were overvalued in the city by as much as 30 per cent in last year’s third quarter and warned a “disorderly adjustment” in the property market could pose a risk to the city’s economy.

The international financial institution projected in March that home prices would increase by 5.8 per cent this year and exceed 7 per cent annually through to the end of 2026.