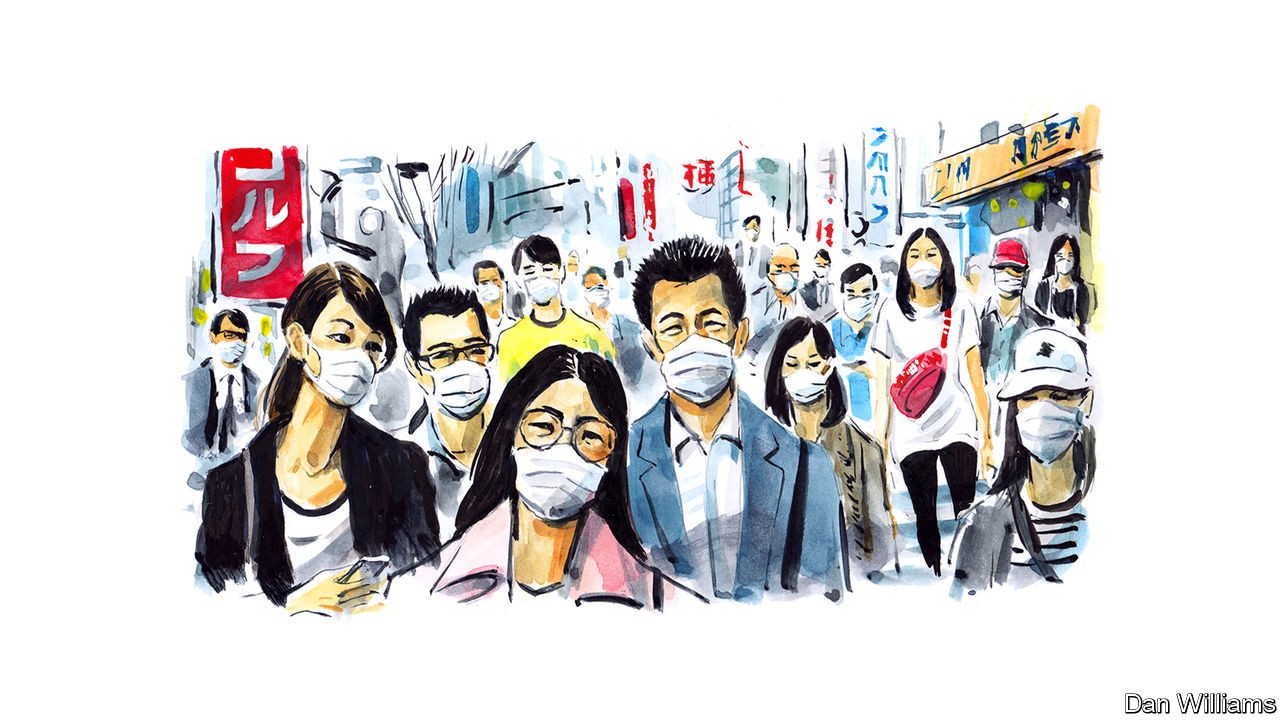 Why the pandemic has affected Britain and Japan so differently

LEAVING JAPAN, where your correspondent was posted for four years, was always going to be a shock to the system. The country is almost certainly the most functional and clean on the planet (even though there are no rubbish bins in the streets). It is possibly the most considerate, too. The pandemic has only served to magnify that.

While the rest of the world struggles to contain covid-19, Japan has been through two spikes that, relatively speaking, look like mere undulations. Just over 1,600 people have died, in a country of 127m. Some studies suggest there has been no excess mortality (because people are taking care there have been fewer deaths from other diseases such as flu). That is so even though Japan has two of the world’s ten biggest cities and its oldest population-nearly a third of its people are over 65.

Contrast that with Britain. Nearly 43,000 people have died-excess mortality suggests far more-in a population half the size of Japan’s and with fewer old people (only a fifth are over 65). It is undergoing a second surge, with more recorded cases than the first one, although that partly reflects more testing.

As it again tightens up-on October 12th Boris Johnson, the prime minister, announced a three-tier system of restrictions in England-life in Japan has been returning to what now resembles something close to normal. Its shutdown in the spring was shorter and much more limited in scope than in Britain, and based on government requests rather than legally enforceable rules.

A big clue for the different rates of the virus emerged as soon as your correspondent stepped into Heathrow airport from her (Japan Airlines) flight from Tokyo. It was unsettling to see so many mouths and noses. Japanese passport officers wear face masks and visors; their British counterparts did not cover their faces at all.

They may have been largely shielded from people arriving by perspex screens, but not from other workers as they moved around, swapping cubicles or chatting. Passengers meanwhile wore their masks as casually as you might sling a scarf over a shoulder, as neckerchiefs or chin warmers.

This scene was repeated over several outings in the following days. We ventured, not without trepidation, to a soft play area. Signs stated “spectators must wear masks” yet almost all the parents were running around, talking loudly, mask-free; only some staff wore them (we left).

Lifeguards at the local pool were uncovered. So were baristas in a nearby coffee shop. Even after the British government made masks mandatory in more settings on September 24th, many seem to be complying half-heartedly at best.

The lack of face-covering feels alien-and frankly anxiety-inducing-to your correspondent. Since the pandemic started it has been extremely rare to see anyone in Japan, older than primary-school age, free of a well-fitting mask covering both nose and mouth, even on the streets. More and more evidence suggests that, when worn correctly, masks can not only significantly help slow the spread of the virus to others but also protect the wearer.

Japan had an advantage. The country has a long history of wearing masks. (Other Asian countries that also have good mask uptake have done so only since SARS in 2003, which barely touched Japan). The first traces of them date back centuries, when they were used at religious rituals and possibly for medical reasons, too.

But they were adopted widely after the last pandemic, of Spanish flu in 1918. Tokyo’s air-pollution problem in the 1970s gave another reason to keep the custom alive. So did pressure not to take a day off sick when ill during the economic boom, widespread hay-fever-inducing pollen and then, in 2011, worries about microparticles from the earthquake and tsunami that caused the meltdown of a nuclear power station. All this meant that, even before covid-19, masks were a common sight in Japan.

Japan did not just get a historical head start. Culturally there is no politically charged debate about personal liberty and masks; whether through social conformity or otherwise, and without government instruction, masks became ubiquitous from February, both for workers and the general public. The default habit is to wear a mask and remove it in exceptional settings: even lone drivers inside cars can often be seen wearing a mask, even if pulled down. In Britain the opposite is true.

It did not have to be that way. Other countries without a culture of wearing masks have adopted them. Around 85% of Italians now say they always wear a mask in public.

In Britain that figure is less than one-fifth. Part of the problem is the messaging. Initial warnings that mask-wearing could be counter-productive-because they make people feel safe and therefore more likely to engage in riskier behaviour, or because they cause them to touch their face more often-have not been updated as new research has suggested the benefits.

Masks alone probably do not fully explain the difference in the way the virus has affected Japan and Britain. Other theories for Japan’s good record circulate. Rather than hug or shake hands, people stand apart and bow to one another.

Some suggest people produce less spittle when speaking Japanese (that may be fanciful, although Japanese do tend not to talk loudly, guffaw or shout to one another). Others reckon the population has been exposed to more coronaviruses and is therefore more resistant to them.

In June Aso Taro, Japan’s finance minister, said that he explained to foreign callers that the country’s low mortality rate was down to mindo, loosely, a high level of cultural standards. That led to accusations of racism and nationalism. Many Japanese have, however, looked at other countries’ experiences of covid-19 with horror.

They wonder why people elsewhere don’t don masks or carry hand sanitiser. (On June 19th queues formed outside UNIQLO, a giant Japanese clothing brand, of customers eager to buy their newly launched face mask suitable for the summer heat. They were like gold dust for weeks afterwards.)

Japan has an extremely strict border policy, too. It currently altogether bans people from 159 countries from entering and, until September, prevented residents from leaving and returning. Now anyone among the few who are allowed to enter, or Japanese and foreign residents who go and return, must take a test for covid-19 infection before leaving, on arrival, and must quarantine for two weeks whatever the result.

Japan is being lax when it comes to other preventative measures. There is not enough testing. Social distancing is minimal. Yet as time has passed it has seemed churlish to criticise the country’s record. After shutting for a few weeks in the spring, nurseries have since been open with large groups of kids messing around together.

Schools, which were shut early for several months, before other countries, reopened in June and have remained so. Businesses have been hit hard, but can operate again. Wearing a mask has few costs and evidence of their effectiveness is mounting; it will be one (of several) Japanese habits that your correspondent will keep.
Add Comment

The Foreign Ministry in Beijing has urged London to reconsider its policy that offers visas for Hong Kongers with British overseas...
×