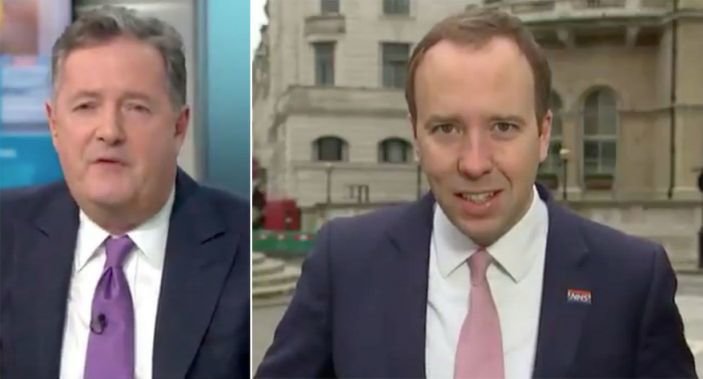 Matt Hancock’s months-long absence from Good Morning Britain ended on Monday, as he faced questions about why he hadn’t resigned over COVID.

Ministers such as the health secretary have dodged being questioned by presenters Morgan and Susanna Reid since April due to a government boycott of the ITV show.

In Hancock’s first appearance since the boycott was lifted, Morgan listed government failings on COVID, saying thousands of elderly people were sent out of hospitals back into care homes without being tested, that 20 million people were allowed to fly into the country during the first wave, and that the public had initially been told not to wear masks.

The presenter also criticised authorities for allowing the Cheltenham Festival to take place, said the country had locked down “at least two weeks late”, and said the UK “stopped community testing” early in the first wave.

“The ‘world-class’ testing system”, which you then promised us in January, is now a complete shambles,” Morgan said.

“So I put it to you, given we now have over 50,000 deaths in this country, which is the worst death toll in the whole of Europe, why are you still health secretary and why haven’t you offered your resignation?”

Hancock said: “Because we’ve been building the response to all of these enormous challenges of this unprecedented pandemic.

“The first thing is on testing, we’ve hit each of the targets I’ve set, half a million tests capacity now.

“And I’m here to tell you we’re going to double that over the next few months, and that means we can use testing in order to find where the virus is and we’ve got those turnaround times down so people can get the result faster and then isolate if needed.”

Labour MPs were quick to highlight Morgan’s criticisms, and also noted that Hancock had not appeared on Channel 4 News for months either.

The list of this government’s failures over coronavirus is endless. The British public deserves so much better than this 👇🏿pic.twitter.com/j8Bij1Rac5

That shameful list of failure is the reason why Govt ministers have been dodging scrutiny both in Parliament and in public. People deserve better than this incompetence, cronyism and failure. pic.twitter.com/t9PHbDzjhR

So cowardly for a minister to evade press scrutiny in this way. @Channel4News Unless, of course, he’s in the huff. Not sure which is worse. https://t.co/VE8PQNYZhT

Hancock is expected to host a press conference at Downing Street on Monday.

The UK has recorded 1.3 million cases of COVID-19 and 51,934 deaths of people who tested positive for the disease within 28 days before they died.