As the country continues to battle ongoing protests and a financial crisis, we take a look at the protesters’ demands and the government’s response.

Thousands of Panamanian protesters have taken to the streets in recent weeks to demand the government put a stop to rising inflation and corruption.

President Laurentino Cortizo recently announced measures to cut fuel costs and put a cap on the price of basic food items – but protesters said they were not enough and promised to continue demonstrating.

Here is what you should know about the protests, some of the longest to have taken place in Panama in decades.

Why is Panama having protests and what are the protesters’ demands?

*  The latest protests come as Panama battles an inflation rate of 4.2 percent in May; unemployment numbers of about 10 percent; and an increase in fuel costs of almost 50 percent since January.

*  Teachers were the first group to demonstrate at the start of July but they have since been joined by other groups, including construction workers, students and members of Indigenous groups.

*  Initially, the protesters called for the freezing and reduction of fuel prices, a price cap on food and an increase in the budget for education, but the demands have since widened to include a national negotiation to address political corruption and discuss larger political reforms.

*  “There are no medical supplies, there are salary cuts, and there is no work. There is no money to pay the doctors,” she said. “As a student, the future worries me a lot.”

What has been the impact?

*  In the central province of Veraguas, protesters blocked the Pan-American highway affecting the access of goods to the Panama Canal from other Central American countries. The highway is the route through which 80 percent of Panama’s fruits and vegetables are transported.

*  Economists warn the demonstrations have cost the country millions of dollars in losses and are leading to shortages of fuel and food. On Monday, most of the stalls at Panama’s main produce market closed early because of a lack of fruits and vegetables.

*  “Everything is stuck; few things arrive,” Roberto Villarreal, a seller, told Al Jazeera. “A little tomato, onions, peppers, or carrots and potatoes. And usually, we can only sell 30 percent or so of what arrives. The rest is already ruined for being blocked for days.” 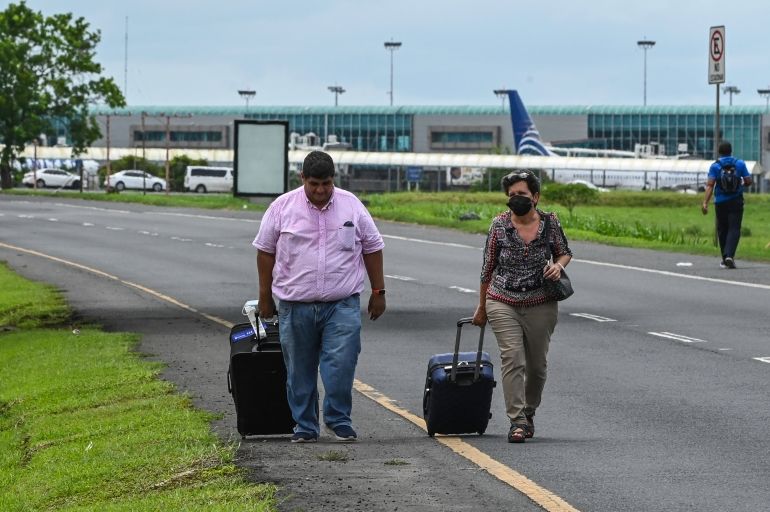 Passengers walk as union workers block the entrance to the Tocumen International airport, in Panama City

What has the government done?

*  Responding to the protests, Cortizo, the president, announced a reduction in the price of fuel and plans to cap the price of 10 basic products.

*  He blamed the COVID-19 pandemic and the war in Ukraine for the cost increases.

*  “One of the problems now hitting Panamanians and the world is rising fuel prices and the consequences. For that reason, I set up talks to address high fuel costs directly impacting the cost of staple foods, with the objective of finding concrete and feasible solutions,” Cortizo said.

*  Cortizo’s administration agreed on Sunday to further reduce the price of gas from $3.95 to $3.25 per gallon, a stark contrast to June’s $5.20 per gallon. But the move was not enough to appease the demonstrators, who erected new roadblocks and pledged to continue protesting.

*  Analysts say part of the problem lies in an unequal economic recovery for Panama’s various social classes following the pandemic.

*  “The macro numbers are based on a few items – logistics, the national airline, mining, and the Panama Canal,” Guillermo Ruiz, a political analyst, told Al Jazeera.

*  “But that growth did not trickle down to the population while prices went up. So working-class Panamanians are wondering why, if the country is growing by 6.5 percent, they are unable to pay for medicine or gasoline,” he said.