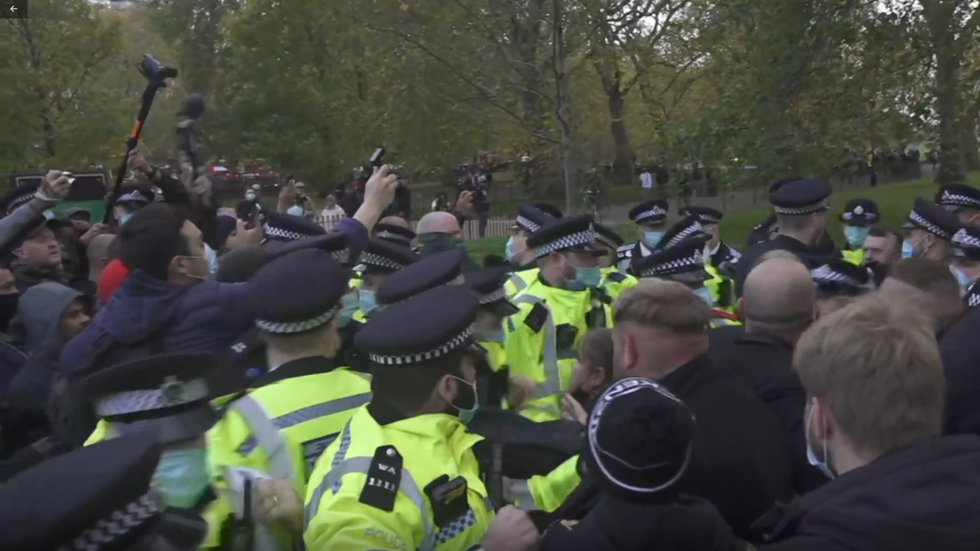 British anti-Islam activist and ex-English Defence League leader Tommy Robinson has been arrested at a London rally held in breach of Covid-19 regulations, sparking a skirmish between a crowd of his supporters and the police.

Videos circulating on social media show the controversial right-wing activist being detained at the Speakers Corner in London’s Hyde Park, before being taken away by a large group of police officers.

A crowd of his supporters at the location could be seen clashing with police officers, according to footage obtained by RT’s Ruptly video news agency. While police pushed the activists away, they could not be seen using any riot control weapons to disperse the group.

The event was reportedly aimed at demonstrating solidarity with another activist, Hatun Tash, who was previously attacked at the Speaker’s Corner while showing an image of Prophet Mohammed. Footage published on social media show the activist being punched in the face by a man dressed in black.

There have been no reports about anyone else being arrested at the event except for Robinson, whose real name is Stephen Yaxley-Lennon. Police later confirmed they had detained “a man aged in his 30s” for violating coronavirus regulations by holding an illegal gathering at the park.

Under the existing rules aimed at stemming the spread of Covid-19, no more than six people can come together in public in London, including in parks. The videos show that there were dozens of supporters who attended Robinson’s gathering.

However, all gatherings will soon be banned in London altogether since the UK is heading into a new national lockdown starting on Thursday. The measure was announced on Saturday as the number of new cases registered every day over the past week remained well over 20,000 on average. More than 23,000 people tested positive for Covid-19 in the UK on Sunday.