Hungarian Prime Minister Viktor Orban may have alienated his EU neighbours, who accuse him of undermining democracy, but he will get a warm reception thousands of miles away at a conservative conference in Texas on Thursday. How did this unlikely love affair blossom?

"He has a real hunger for knowledge," says Zsuzsa Hegedus about her friend Viktor Orban.

"So apart from the fact that we laughed a lot… he wasn't just interested in what I had to say, he really wanted to understand."

That was in 2002, when they first met in her leafy garden in the upmarket Budapest residential suburb of Pasaret - the Pasha's Meadow, named after the last Turkish ruler of the city.

That passion for learning accompanies Orban to this day - he reads widely, peppers his speeches with thoughts and quotations from world literature, and loves to entertain famous writers and intellectuals in his office in a former convent overlooking the Danube river.

More recently, he waxes lyrical about the "decline of the West" - a view he shares with the Russian President, Vladimir Putin, among others. 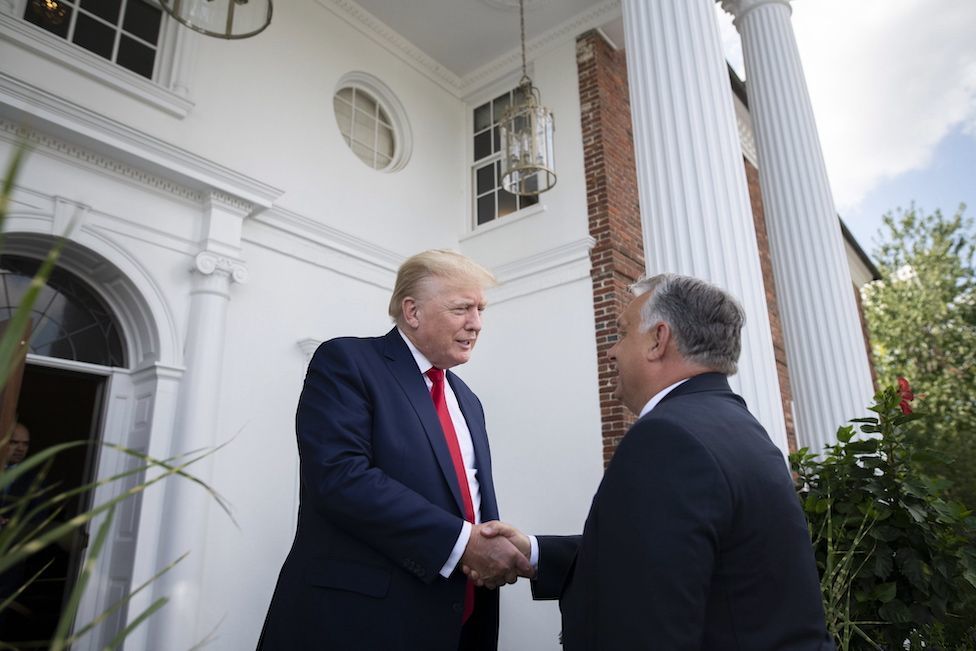 Trump welcomed Orban to his New Jersey home on Tuesday

A Nato member since 1999, his government refuses to send arms to Ukraine, or allow the shipment of arms from other countries across Hungarian territory. But his latest controversy hinges on a more ancient argument - about race.

"There is a world in which European peoples are mixed together with those arriving from outside Europe. Now that is a mixed-race world," he told an annual gathering of tens of thousands of admirers at Baile Tusnad in Romania in July. "And there is our world, where people from within Europe mix with one another… in the Carpathian Basin we are not mixed-race: we are simply a mixture of peoples living in our own European homeland."

Two days later, Zsuzsa Hegedus publicly condemned Orban's remarks as "a pure Nazi text, worthy of Joseph Goebbels" - Hitler's propaganda chief. She resigned as his adviser on social inclusion, and a bruising exchange of letters followed. He said his remarks were misrepresented. 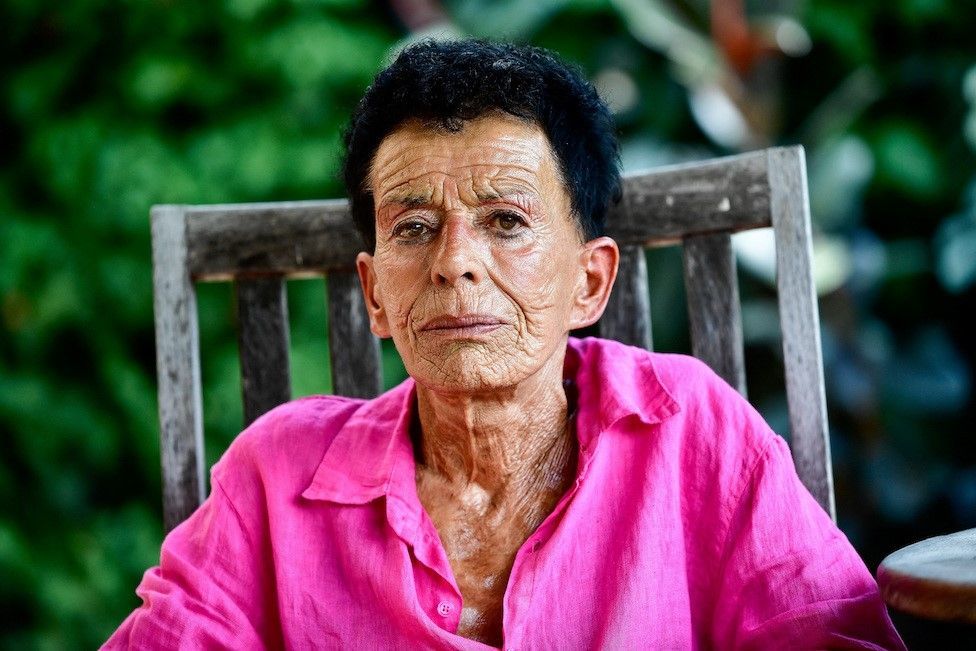 The story of the 20-year friendship between the thin, Jewish, chain-smoking, left-wing sociologist and the larger-than-life, right-wing Hungarian leader with a fondness for pork, reveals much about Orban's thinking, his success, and the spell he casts on his admirers - from Texas to Turin. It may also contain the seeds of his downfall.

The key to understanding Orban and his Fidesz party, Hegedus explains, "is that they came from below".

Orban grew up in a typical rural Communist-era family in the villages of Felcsut and Alcsutdoboz, south of the Hungarian capital. Brought up mostly by his grandparents, his sports teacher was the first to recognise his footballing skills, and took him to the nearby city of Szekesfehervar to buy him his first football boots. 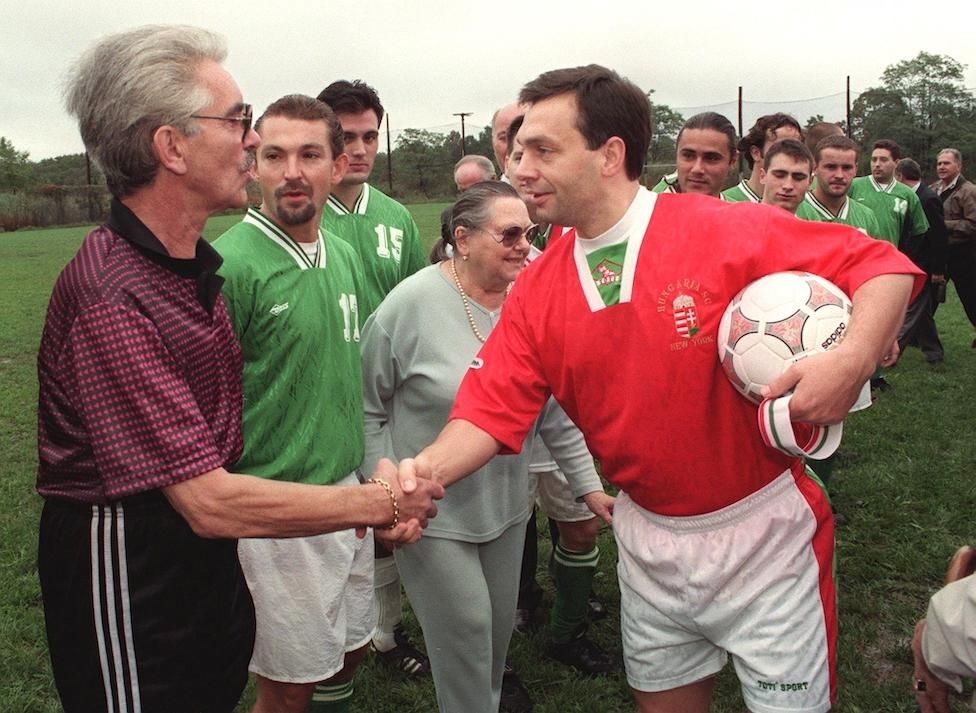 Their common interest in the poor and downtrodden of Hungary brought Orban the politician and Hegedus the sociologist together. His ambition was to return to power and stay there, and for that he needed the rural vote - where the vast majority of Hungarians still live. She was appalled that a quarter of the Hungarian population were living in dire poverty, and was willing to support a leader who didn't just talk, but acted. What a team they could make together, they realised.

Since he returned to power in 2010, the number of Hungarians out of work has fallen from 11% to 4%. Marriages have doubled, and divorces and abortions have fallen to record lows. The birth rate has risen by a quarter.

In April this year, Orban won his fourth consecutive term in office. Every single settlement with a population under 10,000 voted for his Fidesz party. The election was seen by his critics as free, but not fair - his party, and his messages, dominate the media. He refused to debate with the opposition candidate who was granted just one five-minute slot on state TV.

"He has a remarkable ability to spot a political vacuum and occupy it," says Hegedus. In 1994, Hungary's first post-Communist party, the Hungarian Democratic Forum, fell apart. And Viktor Orban converted his small, staunchly liberal party into Hungary's main conservative force, in time to win the 1998 elections. 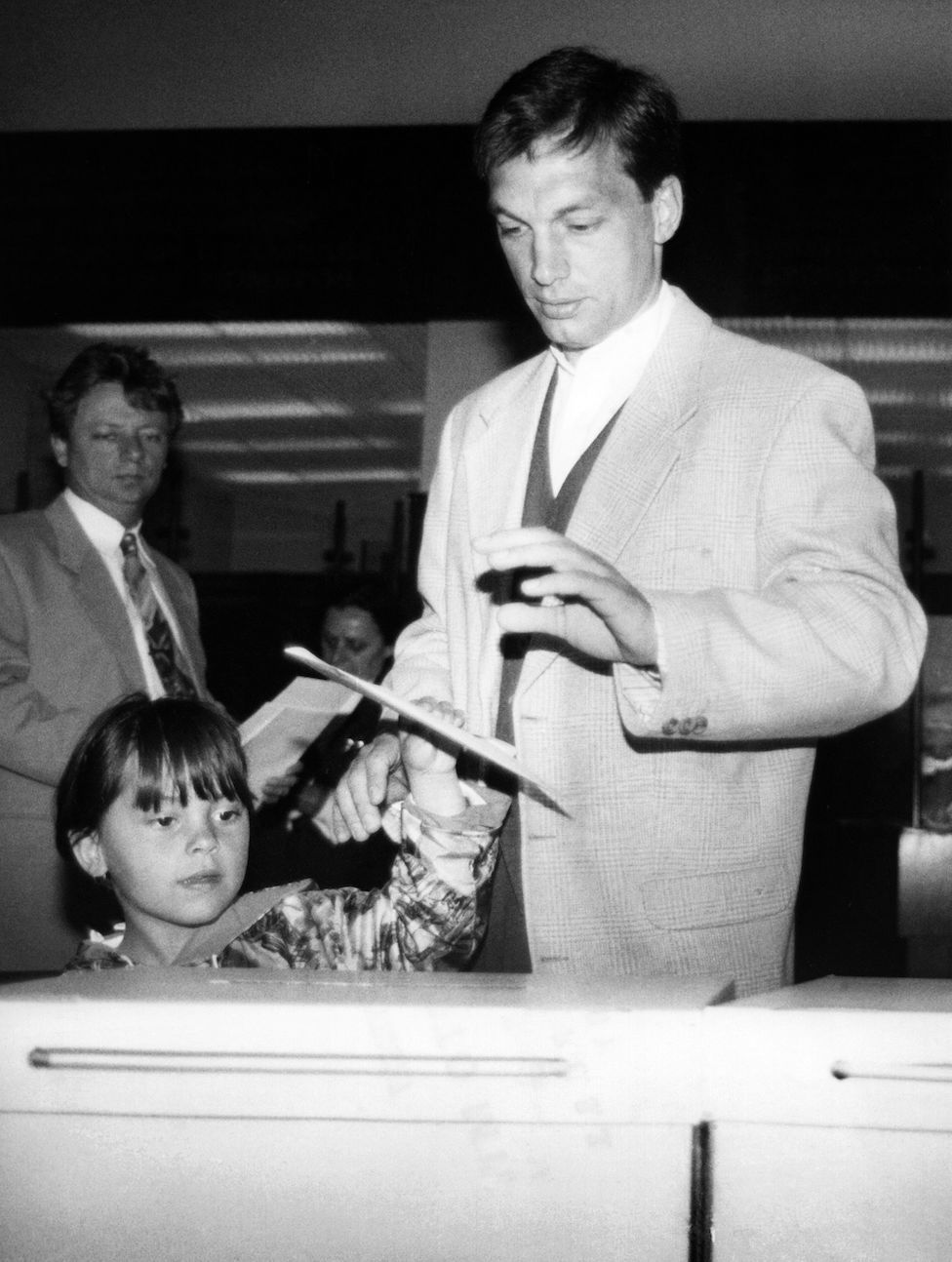 He lost, to his own amazement, in 2002 then painstakingly rebuilt his party, with its roots in the villages and provincial towns, and bounced back to victory in 2010. Orban has run Hungary ever since, with a fatherly hand. So where does she think he has gone astray, I ask his former colleague.

"The longer they stayed in power, the further they got from the ordinary people," she says. For the past four or five years, he has not gone out as much.

A hallmark of his years in power has been his unceasing conflict with the European Union, which Hungary joined in 2004. He loves to rail against "the Brussels bureaucrats" as much as Donald Trump enjoys provoking US liberals. But Hegedus believes he has got carried away by his own rhetoric. She blames his American former campaign adviser, Arthur J Finkelstein, who was a Republican pollster.

"The real damage was done in Hungary by Finkelstein's thinking." He would find a theme that divides the country into two warring camps, she says, and then the majority of the population will vote for the toughest position.

In her view, this polarising power is still central to Orban's thinking, despite Finkelstein's death in 2017. She likens his mixed race speech to him holding a burning match to a barrel of oil. As a looming economic crisis bites in Hungary, she is afraid that, inspired by the prime minister's words, "desperate people will start lynching others - and it's all the same who they lynch. Because then it would be too late to stop it". 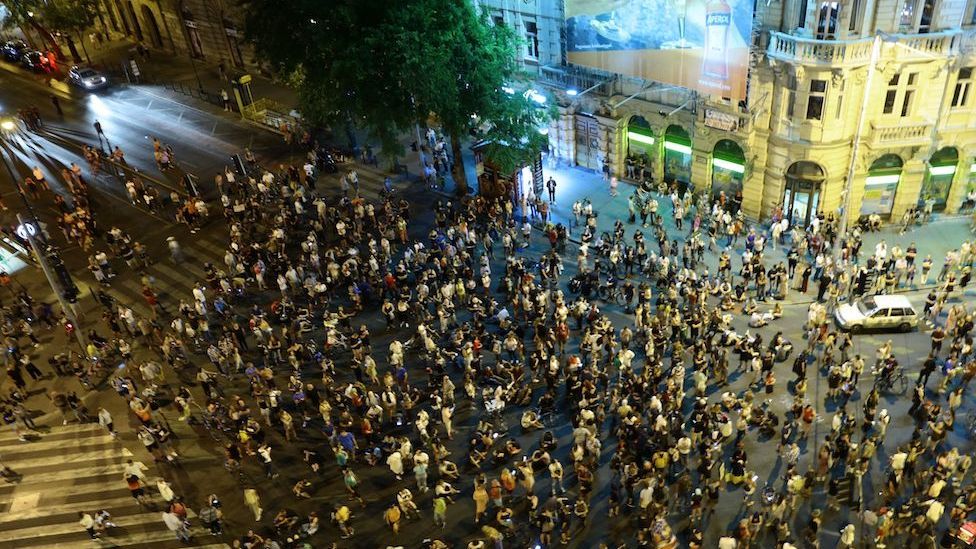 Recent protest in Budapest over taxes

And does she believe that Viktor Orban has understood her warning? Her answer is a very quiet, less than convincing, "yes". She portrays him as a man who takes full responsibility for his decisions, but who can easily be swayed by those in his inner circle - from which she has now withdrawn.

"Whoever advised him on this speech had in mind, that we need to really whip up a big hatred now. And of course they didn't tell Orban that. And from my own experience, and that of my parents [during the Holocaust] I can say: If we let the genie out of the bottle, we cannot put it back in."

Orban was "discovered" by Republicans as late as 2021, despite his earlier contacts with the Trump White House, and collaboration with former Trump adviser Steve Bannon in 2019.

Fox News host Tucker Carlson came to Budapest a year ago and presented his show every night from a hotel roof overlooking the city. "Of the nearly 200 different countries on the face of the earth," he told his viewers, "precisely one of them has an elected leader who publicly identifies as a Western-style conservative. His name is Viktor Orbán."

The next day the Carlson interview with Orban was amply illustrated with footage from their flight together, by helicopter, along the anti-migrant fence Orban has built along Hungary's southern border with Serbia. Orban's anti-immigrant, pro-family, pro-sovereignty messages, have all endeared him to American conservatives.

For Orban, the trip to Texas gives him an opportunity to renew his friendship with Donald Trump and other leading US Republicans, and above all to project himself on the world stage as a champion of national sovereignty, a statesman to take seriously. He clearly hopes that will strengthen his hand in a Europe in which he feels increasingly isolated since the start of the Russian invasion of Ukraine.

*  This year it's in Texas and will feature Mr Trump, Fox news host Sean Hannity and Senator Ted Cruz, plus dozens more

But he will also be walking a diplomatic tightrope. In his speech in Baile Tusnad, he warned his audience that the reason the US government is so keen to cut Russian gas supplies to Europe, is that it wants to sell its own shale gas to Europe.

A few days after the war of words between Hegedus and Orban broke out, Hungary's top football team, Ferencvaros, decisively beat old rivals Slovan Bratislava in the European Champions League, 4 -1. Amidst the national euphoria surrounding Orban's favourite sport, few stopped to consider the glaring contradiction between his speech and the victors of the match. 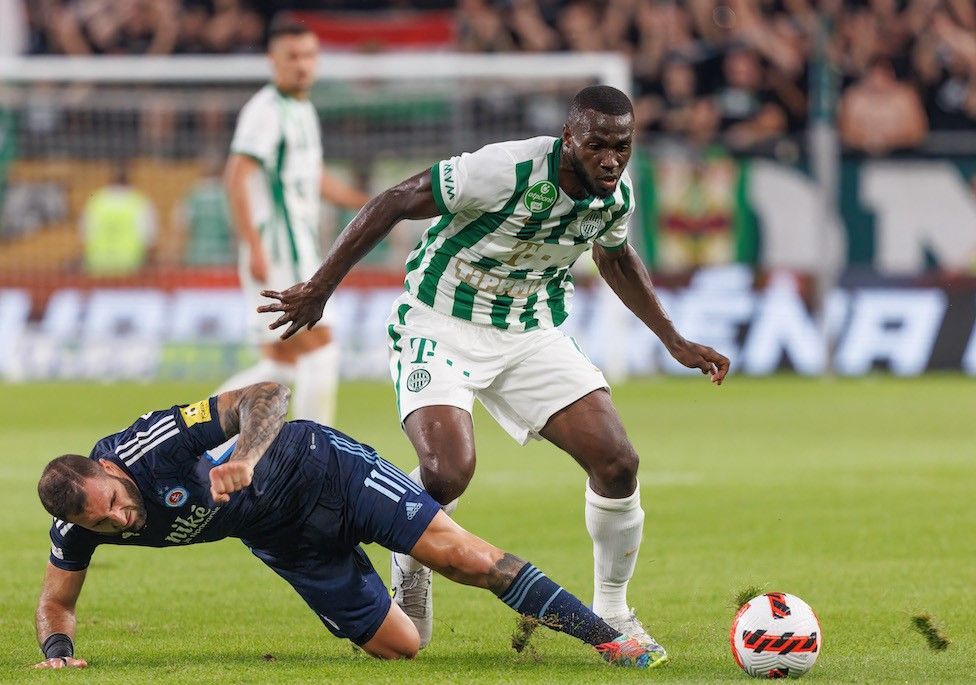 Anderson Esiti of Ferencvaros in the Champions League tie against Bratislava

Of the 12 players on the pitch that summer's evening, six were Africans, one Dutch, one Bosnian Muslim, two Norwegian, and two Hungarians. Three of the goals were scored by the African players.

The strange reality of Orban's Hungary is that a growing number of people from China, Africa, Russia and Ukraine, as well as the European Union, are making it their home.

As a keen football supporter, Orban knows this very well. Between 2013 and 2017, 18,000 Chinese citizens paid around $300,000 each for Hungarian citizenship - in a residency bond programme introduced by his government. There is also a generous scholarship programme for foreign students, with beneficiaries from all around the world. Many of those students stay on, if they can.

But that's not the message he shares with his supporters. Outside his tent, Hungarians are "mixing" more than ever.