The United States will begin turning back migrants and refugees from Nicaragua, Haiti and Cuba who try to enter the country without permits at the border with Mexico, the White House has announced, drawing condemnation from rights groups.

The White House said on Thursday that it would accept as many as 30,000 people per month from the three countries – along with Venezuela – and give them two-year work authorisation, provided they have sponsors in the US and pass background checks.

However, anyone who seeks to irregularly cross the border will be ineligible for the programme and will be sent back to Mexico, which the US said had agreed to take back 30,000 people monthly from Venezuela, Cuba, Nicaragua and Haiti.

“These four countries account for most of the people now travelling into Mexico to try to start a new life by crossing the border into the United States of America,” US President Joe Biden said during a news conference on Thursday that announced the new restrictions.

“We anticipate this action is going to substantially reduce the number of people attempting to cross our southwest border without going through a legal process,” Biden told reporters.

“My message is this: If you’re trying to leave Cuba, Nicaragua or Haiti … do not, do not just show up at the border. Stay where you are and apply legally from there.”

The move marks a massive change in US immigration rules, and it will stand even as the US Supreme Court considers ending a border expulsion policy known as Title 42 that has allowed authorities to rapidly expel asylum seekers without offering them a chance to seek protection.

While Amnesty International USA welcomed the expanded humanitarian parole programme – a process that allows people into the US but does not give them a pathway to permanent status – for citizens of the four countries, it condemned the ramped up border expulsions.

“The Biden Administration must reverse course and stop these policies of exclusion, and instead uphold the right to seek asylum and invest in the communities that are stepping up to welcome,” the group’s Americas advocacy director, Amy Fischer, said in a statement.

Heidi Altman, policy director at the National Immigrant Justice Center, also accused the Biden administration of “openly rejecting” US law, which “clearly says it is legal to arrive at the border & seek asylum”.

“For many people that is the *only* option because they are fleeing for their lives & there’s no other safe haven,” Altman wrote on Twitter.

Aaron Reichlin-Melnick, policy director at the American Immigration Council, said Thursday’s announcement “had a lot of bad things in it”, but one major positive: the new programme that could allow 360,000 nationals from Cuba, Nicaragua, Venezuela and Haiti into the US annually.

That, Reichlin-Melnick tweeted, offers “a real ‘alternate pathway’ like we’ve asked for”.

The US has seen a surge in asylum seeker arrivals at its southern border with Mexico, fuelling a pressure campaign by Republican politicians who argue that the Biden administration is not doing enough to secure the frontier.

Biden had campaigned for the presidency on a promise to reverse some of his predecessor Donald Trump’s most hardline, anti-immigration policies, and he has promoted efforts to develop what the White House calls “a fair, orderly and humane immigration system”.

But the Biden administration has sought to deter migrants and refugees from arriving at the border while also defending Title 42 in court despite criticism from rights groups who said the measure puts asylum seekers’ lives in danger.

Thousands have fled their home countries due to gang violence, political turmoil, environmental disasters and socioeconomic crises, among other factors – and rights advocates say US deterrence policies have done little to stem the flow of arrivals.

According to data from US Customs and Border Protection (CBP), border authorities have used Title 42 to turn migrants and refugees away more than 2.5 million times since Trump first invoked it in March 2020, arguing it was needed to prevent the spread of COVID-19.

However, the US Centers for Disease Control and Prevention last April said Title 42 was no longer necessary on public health grounds, and the government announced plans to rescind it – prompting concern over a potential spike in border arrivals.

After a lengthy court battle, a US federal judge in November ordered Title 42 be lifted, but the US Supreme Court late last month agreed to consider whether Republican-led states can challenge the end of the policy, leaving it in place for the time being.

Meanwhile, Biden will travel to El Paso, Texas on Sunday – his first trip to the southern border as president – to meet with local officials to discuss their needs. He then will take a planned trip to Mexico City to meet with North American leaders on Monday. 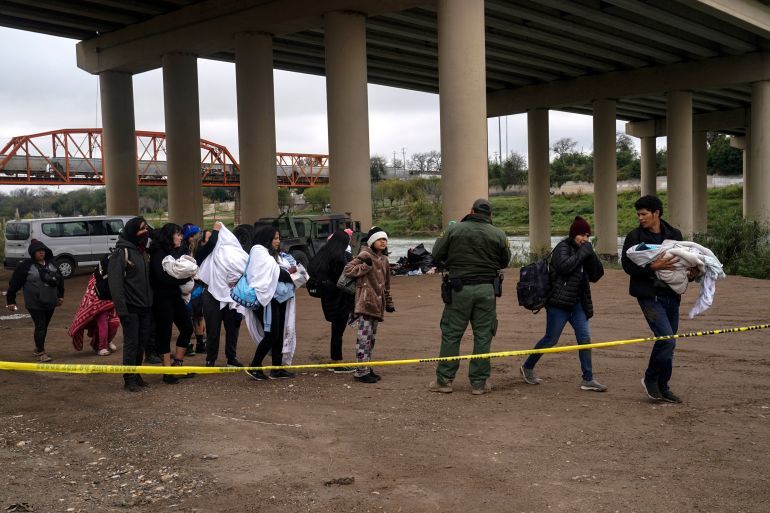 Migrants and refugees board a bus that will take them to a processing facility, in Eagle Pass, Texas on December 19, 2022

“I know that migration is putting a real strain on the border and border communities … We’re going to get these communities more support,” Biden said during Thursday’s news conference.

His visit comes amid a campaign by a group of Republican governors, led by Greg Abbott in Texas, who have been sending busloads of migrants and refugees to Democratic-run cities in an effort to “share the burden” of arrivals in US border communities.

In late December, more than 100 people – including children – were transported from Texas and dropped off in subzero temperatures outside the Washington, DC, residence of Vice President Kamala Harris, who Biden appointed as his point person on migration.

Critics have denounced the busing as an inhumane political stunt, saying it puts people in danger.