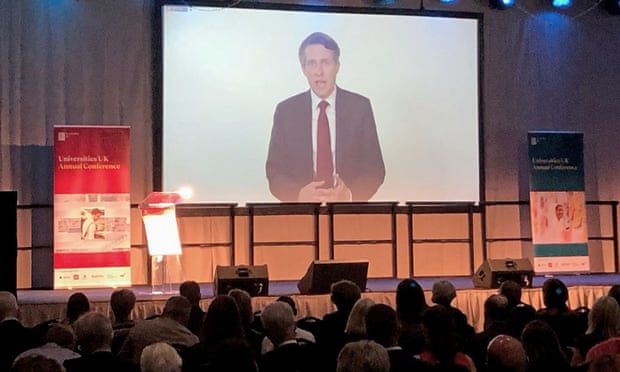 Gavin Williamson has accused some universities of being more interested in “cancelling national heroes” and bureaucracy than improving the lives of students and staff, telling vice-chancellors they risk undermining public confidence in higher education.

The education secretary also attacked universities with high drop-out rates and announced that in the future institutions in England would not be able to count disadvantaged students enrolled on courses with high non-continuation rates towards meeting their access targets.

In a combative speech to the Universities UK (UUK) annual conference, Williamson underlined his opposition to any increased use of remote learning in the aftermath of the pandemic, saying students did not want it and warning that universities should not use cost-cutting as an excuse to retain online learning in place of in-person teaching.

His comments left vice-chancellors attending the event in Newcastle feeling gloomy about the outcome of the government’s comprehensive spending review next month, which is expected to make major changes to how universities in England are funded and how they recruit students.

After praising universities for being “fantastic communities”, Williamson went on to say they “are not perfect”, and listed antisemitic incidents, the use of non-disclosure agreements to silence victims of sexual assault, inadequate teaching provision for disabled students and an increasingly casualised workforce as weaknesses that need to be tackled.

“Improving these matters would command strong support from all walks of life. Yet too often, some universities seem more interested in pursuing a divisive agenda involving cancelling national heroes, debating about statues, anonymous reporting schemes for so-called microaggressions and politicising their curricula,” Williamson said.

“Vice-chancellors who allow these initiatives to take place in their name must understand that they do nothing but undermine public confidence, widen divisions, and damage the sector. Rather than manufacturing offences from the past, let us instead come together to tackle injustice and promote equality for the students and staff of today.”

Williamson urged universities to “get rid of the ball and chain of bureaucracy”, noting that the review of tertiary education funding by Philip Augar found that about £1,000 per student was spent on “corporate activities” and about £500 per student on marketing costs.

“I remained concerned that the sector isn’t doing enough to shift more of its income towards direct activity that improves learning outcomes or vital services like mental health support,” Williamson said.

In response, a spokesperson for UUK said: “Universities are already doing more with less. The freeze in the tuition fee cap means universities have been making up the shortfall on the cost of teaching and support, as well as increasing spending on Covid-19 safety measures, enhanced digital learning platforms, and student support. Despite this, our world-leading universities have been front and centre in the fight against coronavirus.”

Students were now “making a beeline” towards those universities that were returning to campus life as normal, Williamson claimed, because they “quite rightly expect that they can study in person alongside other students”.

“Obviously, I am not saying that you relax all those health measures which are there to keep people as safe as possible and minimise the risk of Covid transmission. What I do want to make clear is that I do not expect to see online learning used as a cost-cutting measure,” he said.

Steve West, the incoming president of UUK and vice-chancellor of the University of the West of England, had earlier told the audience that universities would “continue to harness the benefits” of technological advances for remote teaching when it was useful and popular with students.

“To politicians and commentators who have asked: ‘Why not [have] everything back face to face, in person?’ Well, I respectfully point out that the move to some teaching, learning and assessment online was already happening before Covid-19, because students have been clear in what they wanted and how they interacted with their universities,” West said.

West said a series of critical policy decisions in the next few months, including the comprehensive spending review, would shape the future of the UK’s higher education sector.