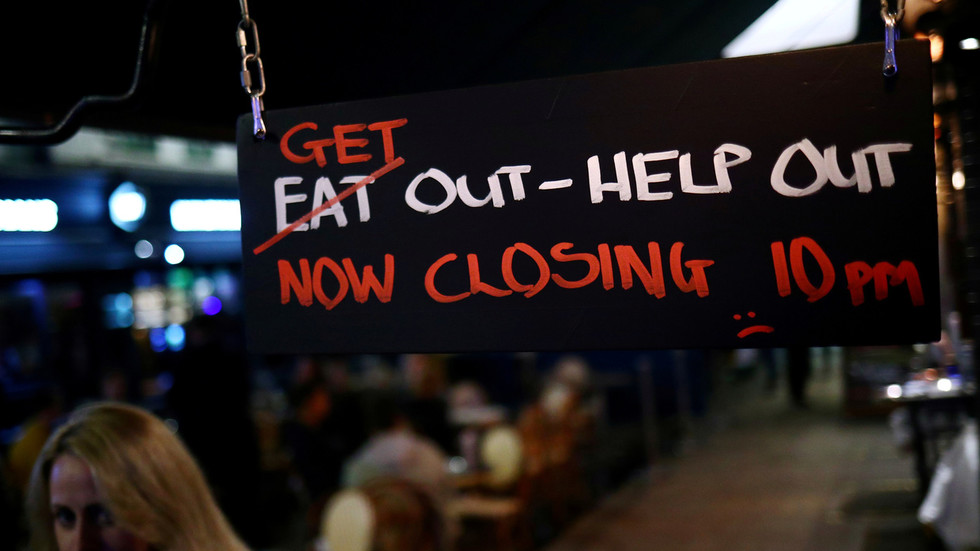 Members of PM Boris Johnson's own party have condemned the UK's "idiotic" 10pm curfew, arguing it does "more harm than good" after observing pub-goers taking the party outside or into private homes where they can't be monitored.

Conservative MPs slammed the curfew imposed last week on UK bars and restaurants in a bid to rein in the rising tide of Covid-19 cases. They insisted that it was having precisely the opposite effect as pub-goers swarmed supermarkets to pick up booze to take home, poured onto public transportation and even danced in the street, all social distancing concerns forgotten.

“Which clown-faced moron thought it would be a good idea to kick thousands of [drunk] people out from the pubs into the street and onto the tube at the same time?” a Tory MP, speaking under the condition of anonymity, texted Politico on Monday.

"It's like some sort of sick experiment to see if you can incubate a second wave."

A spokesperson for Johnson's government hit back at his Conservative critics on Monday, declaring the rules would not be changed again and were not causing any problems anyway.

A group of Tory MPs have attacked Johnson over his unilateral seizure of police-state powers under the pandemic state of emergency, insisting Parliament be given a vote before any further curbs are placed on British “liberty.” Some 50 Conservative MPs signed an amendment last week that would prevent the PM from pushing through further restrictions without parliamentary scrutiny, and Labour and Lib Dem leaders have signaled they will back it.

Tory MP Steve Baker, one of the 'rebels', denounced Johnson's coronavirus regime as “not a fit environment for free people,” warning Sky News on Sunday that this is how “liberty dies.”

However, Health Secretary Matt Hancock – the man behind many of the worst incursions on British liberty, including a bizarre ban on sex between couples living apart – has penned a letter urging MPs not to vote for the amendment. Speaker of the House of Commons Lindsay Hoyle is expected to bow to the government's wishes and not call a vote on the amendment at all.

While some pub owners have suggested removing the curfew and allowing proprietors to stagger closing times in order to prevent crowding on the tube and in the street, Johnson could go to the opposite extreme and follow the example set by Scotland, which has seemingly been competing with the UK government to see which can impose stricter controls without sparking an all-out rebellion.

First Minister Nicola Sturgeon banned household visits entirely last week in addition to imposing her own 10pm pub curfew. Scotland's own Tories have demanded the government release the scientific evidence used to draw up the draconian restrictions, calling the rules “a shambles.”

Rumors that 10 Downing Street will impose a similar ban on household mixing have elicited outrage from the same MPs who are eager to curb Johnson's emergency powers.

Such a ban would “condemn thousands of local people to loneliness and isolation,” former minister Simon Clarke warned in a letter he signed with a group of Teesside MPs. The UK has barred groups of more than six from gathering either indoors or outdoors since September 14, and on Monday it failed to deliver a promised evaluation on the effectiveness of the measure, insisting it was too early to judge.

Some MPs are likely feeling a bit sheepish after it was revealed that their own bars had been exempted from the 10pm curfew and face covering and contact-tracing requirements, even as bars serving the ‘common folk’ protested the regulations would be the last nail in the coffin for their businesses.

While the UK and Scotland have recently seen a rise in diagnosed Covid-19 cases, it has not been accompanied by a rise in deaths as was seen in the early months of the pandemic.

Indeed, the uptick in excess mortality that marked the height of the outbreak in the UK has actually reversed, with all-cause deaths in England and Wales falling below the five-year seasonal average since June, and hospitalizations have declined to the lowest level since the pandemic began.

Speculation has swirled as to why this might be. Some believe it’s because hospitals have gotten better at treating Covid-19, or because the people getting infected are on average younger and thus more likely to survive the virus.

Others think it’s because more people are being tested – including asymptomatic people unlikely to suffer complications – or that the tests themselves are producing false positives, while some argue the coronavirus itself is mutating to become less virulent.