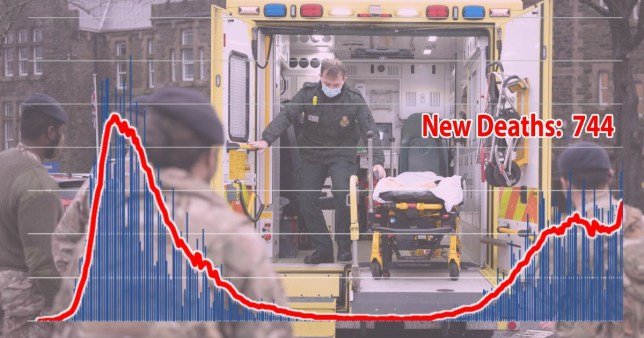 Another 744 people have died with Covid-19 in the highest daily toll since the UK’s peak of the virus in April.

The UK also confirmed another daily record of cases with 39,237 people testing positive for the virus over the last 24 hours, according to the latest data by the Department of Health.

This breaks Tuesday’s record number of 36,804 positive tests. Since the start of the pandemic, 2,149,551 have returned positive results.

Today, the UK recorded the highest number of fatalities in a 24-hour period since April 29, bringing the overall death toll to 69,051.

However, the latter figure increases to 79,349 when taking into account all fatalities that had Covid-19 recorded on a death certificate.

The latest data comes after the health secretary announced several more areas in England will be plunged into tier four measures from Boxing Day. 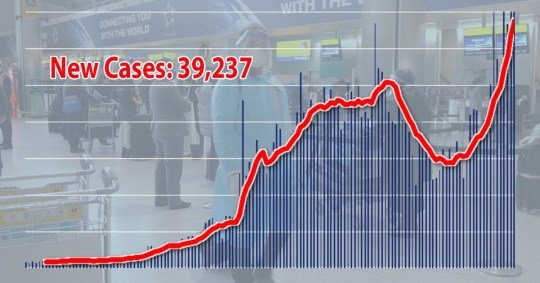 The UK recorded another record of daily cases

He announced that Sussex, Hampshire (except the New Forest), Oxfordshire, Suffolk, Norfolk, Cambridgeshire, Waverley in Surrey, and the remaining areas of Essex still in tier three, will be escalated to tier four from midnight on December 26.

Matt Hancock said the mutant strain of Covid-19 was spreading at a ‘dangerous’ rate with those areas seeing a surge in cases and the Government must ‘act now’ to tackle them.

Two cases of another new variant of the virus, which mutated in South Africa, have been detected in the UK. It is said to be even more transmissible than the first mutant strain identified last week.

The health secretary told a Downing Street press conference on Wednesday that the two people who tested positive for the new strain, and their close contacts, are now in quarantine.

Immediate restrictions have been placed on travel from South Africa and anyone in the UK who has been there in the past two weeks – and anyone who has been in close contact with them – must self-isolate immediately.

The measures come as it was revealed this afternoon the R rate is rising across the country and remains above 1.

Concerns have been raised over the fast-spreading mutant variant which is now said to be ‘everywhere’ in the UK, and is 70% more infectious than the original Covid-19.

However, at this stage experts say it does not appear to be any more harmful and the vaccines should still be effective against it – but urgent work is underway to confirm this.