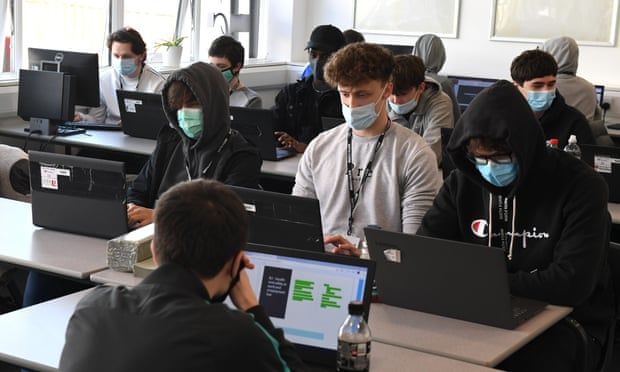 Schools have spent up to and in excess of 100 hours “propping up” the national Covid test and trace system since the start of the academic year, despite having no additional funding or staff, according to a school leaders’ union.

The National Association of Head Teachers (NAHT), which represents 29,000 UK school leaders, is calling for the responsibility for test and trace to be lifted from schools, amid fears of an exodus of head teachers once the Covid crisis has passed.

School leaders, already under extreme pressure due to the pandemic, have found themselves on call every weekend and holiday, receiving notifications of positive cases then notifying close contacts who need to self-isolate, the union says.

According to an NAHT poll of 400 leaders, they have spent on average an additional 44 hours on test and trace since the start of the school year, which equates to around seven extra school days, while many logged over 100 hours.

Speaking at a conference on Tuesday, the NAHT’s general secretary, Paul Whiteman, said: “It was just assumed that school leaders would take on this additional duty despite the government spending billions on a national test and trace system. Not a penny of that money was given to schools.

“To begin with, schools accepted that they were the people best placed to track and inform students when there was a Covid case in their school, because they were the ones who had all the contact information. But it has been a full year now and absolutely no effort has been made to release school leaders from this burden, or to give them additional staff or resources to do it.”

Whiteman said schools in areas with high infection rates had been hardest hit, and many staff found themselves – with little training or guidance – calling families at Christmas to break the bad news that they had to self-isolate because a close contact had been infected.

“The extra burden this has put on school leaders cannot be underestimated,” said Whiteman. “As we try to bring forward the next generation of school leaders at our conference today, the biggest barrier and concern we hear from aspiring head teachers is the level of pressure and the workload they see in the role.

“We are already anticipating an exodus by head teachers once the crisis has passed. One tangible thing the government could do right now to help is to remove the burden of running test and trace in schools and give leaders some free time back.”

A Department for Education spokesperson said: “Head teachers and all school staff have gone above and beyond over the course of the pandemic to make sure the school environment is as safe as possible, and we are hugely grateful for all their work.

“We have provided extensive guidance to schools on how to manage the contact tracing process, including through keeping pupils in smaller bubbles to minimise the risk of transmission and make tracing easier. Our phone line has been available throughout the pandemic with trained staff who can answer queries and escalate to Public Health England as required.”
#covid
Add Comment