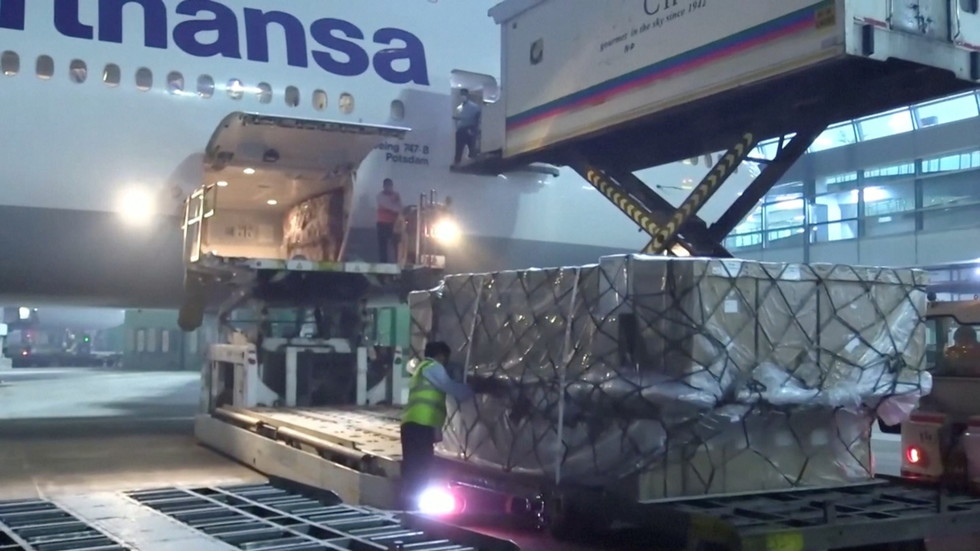 UK says it has no surplus Covid vaccines to send to suffering India, as British ventilators and concentrators arrive in Delhi

The British government has said it is not in a position to share Covid-19 shots with New Delhi, instead prioritising domestic rollout, as the virus continues to gather pace in India and neighbouring countries.

Speaking on Tuesday, Prime Minister Boris Johnson’s spokesman told reporters that the UK was committed to sharing vaccine doses with other nations when it had its own surplus.

“We committed in February to sending excess doses from the UK’s supply to the COVAX procurement pool and to countries in need once they are available,” he said.

“Right now, we are moving through the UK prioritisation list for our domestic rollout and we don’t have surplus doses, but we will keep this under review,” he added.

On Tuesday, the first shipment of British medical aid to India arrived in Delhi. The shipment included some 200 ventilators and 95 oxygen concentrators, which will be transferred to Indian hospitals.

A resurgent Covid wave has shocked India, with hospitals full and oxygen supplies hugely lacking. Countries around the world, including China, have pledged resources to help the Indian healthcare system cope. Record-breaking case numbers of nearly 350,000 a day have been recorded, despite the vaccine rollout and earlier announcements that parts of the country had nearly achieved herd immunity.

Sources told the media that India is expecting a large chunk of the 60 million Covid-19 vaccines that the US will share with the rest of the world. “We are not sure how many we will receive. All I can say here is our bowl is the largest and deepest,” one noted.

On Monday, Washington said 10 million AstraZeneca vaccines could be cleared for export “in the coming weeks” and the rest by June.
#covid 19  #vaccine  #astrazeneca  #covid  #boris johnson  #vaccines
Add Comment