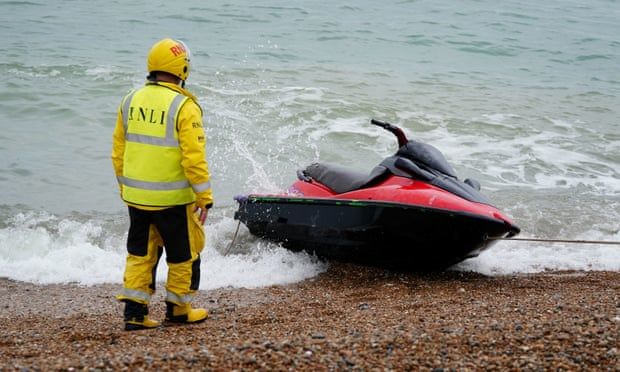 Just five people have been sent back this year, against 289 last year when UK was part of EU returns deal

The number of people who have been sent back to Europe after travelling to the UK across the Channel in small boats has plummeted since Brexit, an immigration minister has admitted to MPs.

Just five people who made the perilous journey from northern Europe have been returned so far this year, the home affairs select committee was told. In the previous year, when the UK was part of an EU returns deal, 289 such arrivals were deported, the minister said.

Tom Pursglove, a minister for the Home Office and the Ministry of Justice, told the Commons home affairs committee on Wednesday that there had been “difficulties securing returns”.

Yvette Cooper, the committee’s chair, had asked “how many asylum seekers or how many people arriving” had been returned to any EU country since January.

Pursglove replied: “On returns related to small boat arrivals … the answer in this year is five.” Later he added: “There is not a returns agreement with the European Union in place at the moment.”

Before Brexit, the UK was part of an EU returns deal known as the Dublin agreement which the committee heard had allowed several hundred people to be returned in previous years.

When Cooper suggested returns were “substantially worse” since losing the agreement, Pursglove said the pandemic had also been a factor. “You will appreciate that there have been some difficulties around securing returns, not least as a consequence of Covid,” he said.

He insisted the “ambition remains to secure successful returns arrangements with our European friends and neighbours. And potentially with the European Union.”

More than 23,000 people have arrived in the UK this year after crossing the Channel in small boats. This is almost three times the total of about 8,500 in 2020.

There were 31,115 asylum claims made in the year ending in June, 4% fewer than in the previous year, Pursglove said.

He said small boats were becoming the transport of choice for “evil criminal gangs” – an expression he repeated on at least five occasions.

Pursglove said previously boats were being launched from about 30 miles of French coastline but now it was from a 120-mile stretch, and he described this as “troubling”.

Asked why repeated pledges by the home secretary, Priti Patel, that she would get the numbers under control had not been met, Pursglove said there had been “most definitely an improvement” in the prevention of small boat crossings.

“Clearly, the fact that we’ve had a fivefold increase in clandestine arrivals this summer compared with 2018 is completely unacceptable. We’ve got to do better on this. And I will not rest until we get to a far better place on this issue,” he said.

The Conservative MP Tim Loughton, a member of the committee, said there had been “similar undertakings” previously from politicians but the “situation has not improved”.

Pursglove reiterated plans to “render the route unviable” and said there was “not one single solution to this problem”.
#priti patel  #covid
Add Comment