The soaring price of milk, cheese and eggs has pushed food inflation to its highest level for 14 years.

Food prices rose at their fastest pace since 2008 in the year to August as the war in Ukraine continued to help drive up prices at supermarket tills.

Rising costs are eating into budgets, with prices rising further than wages.

Overall UK inflation, which measures the rate at which prices rise, eased for the first time in almost a year in August, slipping to 9.9% from July's 10.1%.

The figure was not as high as economists had feared but some have warned the inflation rate is likely to continue to rise, noting that the cost of food, clothing and services - which include things such as shops and restaurant prices - were all continuing to rise sharply.

The Bank of England has warned inflation could top 13% this year, and is expected to keep raising interest rates to try to control it. 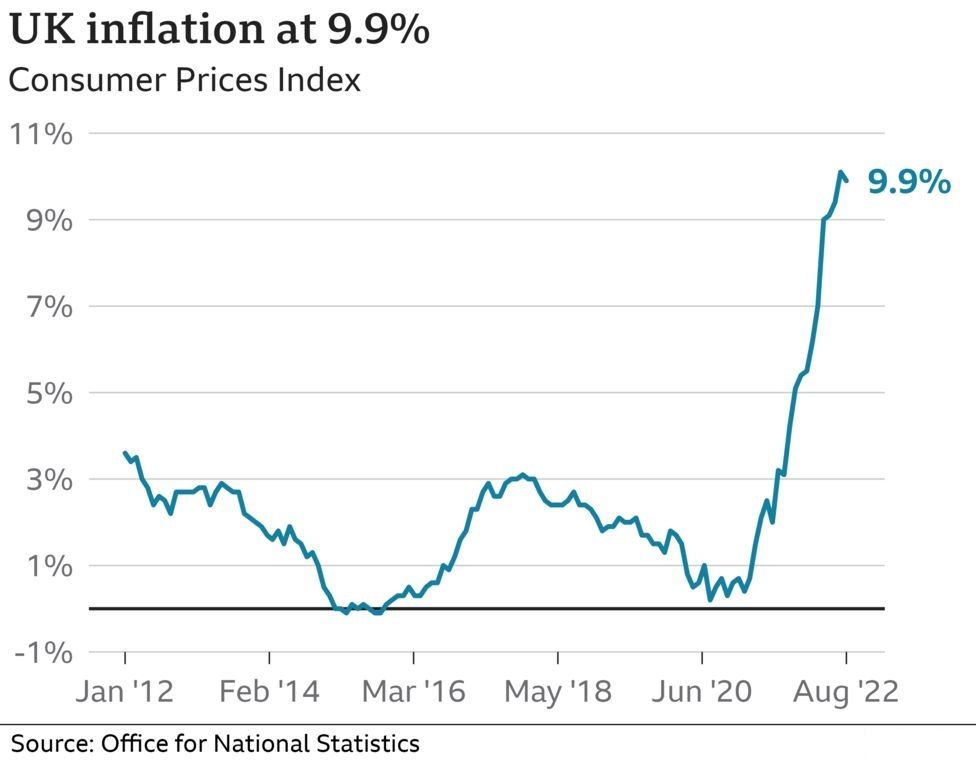 However, the government plan to try and prevent widespread hardship by limiting rises in household energy bills, is likely to mean inflation will now not rise as high as previously expected.

"High inflation continues to drive Britain's cost-of-living crisis, but the outlook has brightening considerably over the past week," said Jack Leslie, senior economist at the Resolution Foundation.

"The Energy Price Guarantee should prevent a second winter surge in prices."

"However, high inflation is set to be with us for some time, particularly for low-income who continue to be hit hardest by high prices."

Food prices have been going up around the world following Russia's invasion of Ukraine, which has been one of the factors pushing up prices at supermarket tills.

The war has disrupted supplies from the two countries, which are major exporters of goods such as sunflower oil, wheat, and fertiliser.

Inflation is the pace at which prices are rising. For example, if a bottle of milk costs £1 and that rises by 5p compared with a year earlier, then milk inflation is 5%.

Central banks around the world, including the Bank of England, have been trying to get soaring inflation under control by hiking interest rates.

The Bank had been widely expected to increase rates again on Thursday, but it postponed that decision following the death of Queen Elizabeth II.

The Monetary Policy Committee's decision will now be announced on 22 September.

Kitty Ussher, chief economist at the Institute of Directors said she still expected interest rates to go up when the Bank of England announced its latest decision.

"The fact that the falling headline rate is due to changes in the price of petrol and diesel, which is driven predominantly by the international price of oil rather than by domestic factors, means news is unlikely to alter expectations of a rise in interest rates," she said, noting the Bank would act to try to stem UK price rises, such as food and services.

According to separate figures published by the ONS, house prices recorded their biggest annual increase in 19 years in the year to the end of July.

The 15.5% rise compared with a 7.8% annual increase the previous month.

The jump was mainly due to the effects of the stamp duty holiday last year.

The stamp duty holiday in England and Northern Ireland was reduced from July last year, before being phased out in October 2021.

As a result, the jump recorded for this July was mainly because of the contrast with the falls in prices seen this time last year.