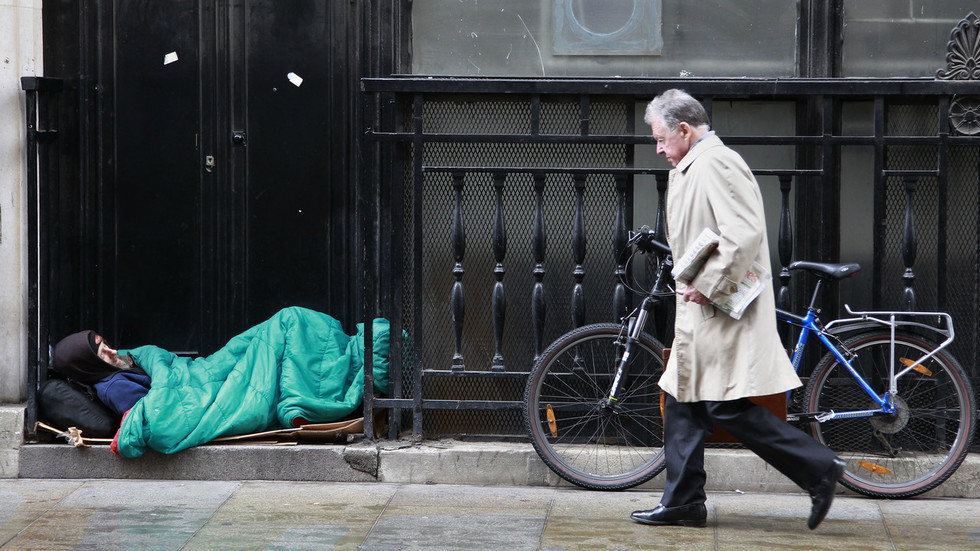 UK homeless deaths rose by a third in 2020, as Covid hit social sector cut to bone by years of austerity, researchers say

Nearly 1,000 homeless people died in the UK last year, researchers said on Monday, blaming the 37 percent increase in deaths among rough sleepers on coronavirus hitting a social segment left vulnerable after a decade of cuts.

The Dying Homeless Project found that 976 deaths among homeless people were recorded across the four nations of the UK in 2020 – up from 710 the year before. The increase in deaths by a third came despite the UK government having provided emergency accommodation to some 15,000 rough sleepers in hotels and other facilities when the pandemic hit in March. The project says 36 percent of these deaths were related to drugs or alcohol, and 15 percent were suicides.

Despite the initial success of the government’s Everyone In initiative during the first national lockdown, someone experiencing homelessness died every 9.5 hours. The scheme faltered during the second and third and street homelessness levels are thought to have returned to what they were pre-pandemic.

The Dying Homeless Project – a coalition that includes those affected by rough sleeping, charities, grassroots activists, journalists, artists and campaigners – wants the government to set up a national inquiry into homeless deaths “to make the critical changes needed to save lives”.

“A lot of hard work went into getting thousands of people off the streets at the start of the pandemic,” said Polly Neate, chief executive of the housing charity Shelter. “But more become homeless every day because there aren’t enough homes they can actually afford to live in.” She added that there were more than a million households on the social housing waiting list.

The Local Government Association, which represents municipalities and councils in England and Wales, estimates that £16 billion ($22 billion) has been cut from government funding over the past decade, with councils losing 60 pence in every £1 they used to receive from the UK government during that time. That has resulted in savage cuts to social services, hitting the homeless hard.

A spokeswoman for the Ministry of Housing, Communities and Local Government said that every death of someone sleeping rough was a tragedy. She added that the UK government was providing over £700 million ($981 million) this year and £750 million ($1 billion) next year to tackle homelessness, and planned to provide 3,300 long-term homes in 2021.

The Office for National Statistics is due to release its official figures on homelessness in England and Wales in October.