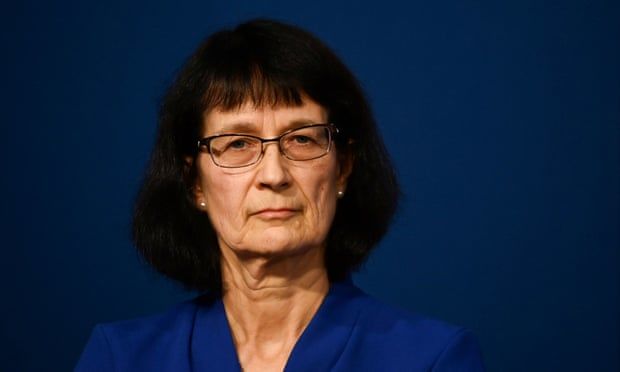 The flagship public health body set up by Boris Johnson to combat the pandemic is in turmoil, with plans looming to cut jobs by up to 40% and suspend routine Covid testing in hospitals and care homes to save money.

Whitehall sources have told the Guardian that the UK Health Security Agency (UKHSA), led by Dr Jenny Harries, is in a state of disarray, with morale at rock bottom and concerns it is not funded to cope with any resurgence in the pandemic. Public health experts warned that the “alarming” cuts could cost lives.

More than 800 staff are due to be lost from vital health protection teams across the country in the coming months, a reduction of 40% from the current 2,000 members of staff. One insider said people were being given two weeks’ notice that their contracts were being ended early, and the way it was being dealt with was similar to the “recent situation at P&O”.

Some other teams throughout the organisation have also been told they need to cut full-time equivalent staff by 40%.

After the Treasury slashed its budget to deal with Covid, UKHSA is now proposing to health ministers that it suspend regular asymptomatic testing in hospitals and care homes from May to save money before a potential winter spike in cases.

Sources in the organisation said funding for asymptomatic testing in high risk settings is only enough to cover six months in a year, and senior officials believe it would be better saved for later in the year.

The proposals come after the government heavily scaled back its provision of free testing for the general public as part of its “Living with Covid” plan, with the previous year’s budget of £15bn cut by about 90%. At the time, the government said asymptomatic testing would continue in high risk settings while prevalence was still high.

Public health experts warned that cuts to testing and health protection staff were “irresponsible”, shortsighted, and risked a resurgence of Covid, especially among health and social care workers.

Covid prevalence levels in England fell significantly to 1 in 17 people in the week ending 16 April, compared with 1 in 14 in the previous week. However, officials said they still regard this level as high prevalence.

Prof Maggie Rae, president of the Faculty of Public Health which represents 4,000 public health professionals across the UK, said: “If the Covid-19 pandemic has taught us one thing, it is the importance of having a properly funded public health system that is able to prepare for, and respond to, threats to our health.

“Government has consistently underfunded public health services which are there to protect and improve health for all. To not only fail to bolster the public health system, but to continue to cut it so deeply, is irresponsible and threatens the health of all in society, particularly the most vulnerable.”

Dr Jyotsna Vohra, director of policy and public affairs at the Royal Society for Public Health, said: “It is deeply concerning to hear about cuts to the UKHSA workforce when we are still in a pandemic. Strong, consistent health protection messaging and activities are vital at this time.

“At a time when infection rates are still high, this feels like we are saving pennies at the cost of pounds, or worse, lives.”

Labour also criticised the proposals to strip away more testing for NHS staff. The shadow health secretary, Wes Streeting, said: “While the NHS is in a permanent state of crisis and patients are waiting longer than ever for care, the government can’t seriously be considering stripping away support even further.

“Patients need to know that they will be safe when they go into hospital and care homes. These proposals risk leaving the NHS unprotected and unprepared.”

Staff at UKHSA told the Guardian that job cuts and the reduction in funding for public health measures have left an “exhausted” and demoralised rump of permanent staff at the organisation. One source said many remaining employees were in a state of “ever-increasing anger and despair at the organisation’s leadership and approach to its staff and strategy”.

Many are also angry over a debacle affecting about 300 UKHSA staff who were told they were wrongly being paid a £3,700 London weighting and that this would be removed. The organisation is now in discussions with its unions over the episode.

The job cuts are a mixture of ending fixed-term contracts and redeploying or giving notice to civil service payroll staff. “Many, many people are jumping ship,” said a third source, with some senior policy staff at the directors level told in pairs that only one or neither of them would be able to keep their jobs.

UKHSA was launched with great fanfare by Matt Hancock, the former health secretary, in 2021, bringing together the former Public Health England, its successor, the National Institute for Health Protection, and NHS Test and Trace. Johnson had ordered the new body after losing faith with Public Health England’s handling of the pandemic during the first national lockdown.

Asked about the plan to scale back testing further, UKHSA pointed to the Living with Covid plan and said any decisions would be taken by ministers. A Department of Health and Social Care source said UKHSA submission had not been received yet but it would be looked at in the context of the plan.

In response to the staff cuts, Paul Cain, director general for health protection operations, said: “In line with the government’s Living with Covid-19 plan we are adjusting the size of our workforce as was always planned. Temporary staff contracts are being brought to an end and those affected are being updated. At the same time, we will build new capability based on the lessons of Covid.

“Those that joined NHS Test & Trace and Public Health England to manage the pandemic response played a crucial role and we thank them for their efforts once again.”

The Living with Covid plan does not refer to plans to cut back UKHSA, instead saying: “UKHSA will continue to lead the wider health protection emergency planning and response system, championing health security across the UK.”