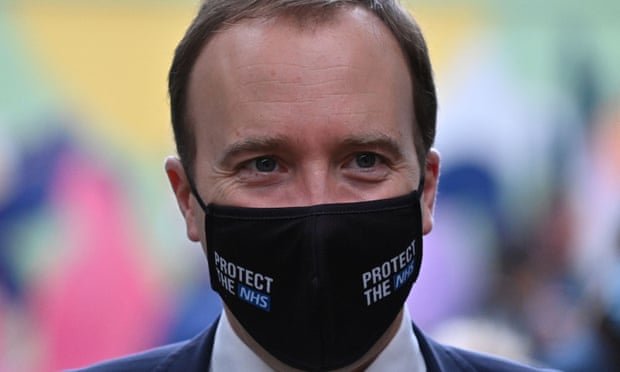 The government has failed to publish any information about £4bn of Covid-related contracts awarded to private companies, in what appears to be a continuing breach of UK law.

The gap was uncovered by campaign group the Good Law Project, which along with a cross-party group of MPs, is suing the health secretary, Matt Hancock, in the high court. They are accusing his ministry of an “egregious and widespread failure to comply with legal duties and established policies”.

The group is warning of a “transparency gap” and is pushing for an independent judge-led inquiry into the billions spent on personal protective equipment, medicines and virus testing and tracing since the pandemic began.

In a legal filing in the case, dated 30 October, government lawyers revealed that £17bn had been spent by the Department of Health and Social Care (DHSC) on Covid-related goods and services since the start of the financial year in April. However, to date civil servants in Hancock’s ministry have only released details of £12.4bn in Covid-related contracts for that period – leaving £4.6bn unaccounted for.

The gap narrowed last week after the department rushed out details of £1.6bn in contracts. Many of the new deals are for the purchase of rapid test kits of the kind being used in Liverpool’s city-wide testing effort.

Government departments are required by law to publish details of contracts no later than 30 days after awarding them. The measures are designed to reduce the risk of fraud and improve value for money by allowing proper scrutiny of how taxpayer cash is spent.

Notices alerting the public to awards over a certain value by publicly funded bodies appear on a European database, Tenders Electronic Daily, and on the UK’s own Contracts Finder website.

Meanwhile, government guidance advises civil servants to publish the contracts themselves within 20 days.

“There is overwhelming evidence that entities connected to key government figures have made staggering fortunes from these procurement contracts,” said Jolyon Maugham, founder of the Good Law Project. “There is a clear public interest in us knowing promptly, whilst those contracts can still be challenged, who benefited and to the tune of how much.”

Among last week’s notices is the largest Covid-related purchase so far by DHSC. The ministry has signed a £496m deal with Innova Medical, which is supplying lateral flow kits. The devices look and work like pregnancy tests, and are made in China for Innova.

An earlier contract with Innova cost the taxpayer £107m. The California-based company is owned by the private equity group Pasaca Capital, which was founded by a Chinese investment banker in 2017.

Whether the deals are value for money remains in question. It is not yet known whether the tests can detect the virus in pre-symptomatic or asymptomatic people, and the government has not published its data on trials of the kits.

Good Law’s claim singles out a number of cases, including the award of a £252m PPE contract to a company called Ayanda Capital on 29 April. Notice of the award was not published on the European database until 2 July. The contract itself was not published until 4 September. Ayanda, which describes itself as specialising in currency trading and offshore property, secured the deal with the help of an associate who was previously an adviser to the government.

The legal challenge also names Pestfix, a pest control business, which has signed 11 PPE contracts with the government. So far, only six have been published.

Government lawyers have defended the delays, admitting “technical breaches” of the law, but saying the information will be made public “in due course”. They say any legal action risks delaying publication.

The DHSC said it could not comment on legal proceedings, adding: “As part of an unprecedented response to this global pandemic we have drawn on the expertise and resources of a number of public and private sector partners. This is completely in line with procurement regulations for exceptional circumstances.

“We have been clear from the outset that public authorities must achieve value for taxpayers and use good commercial judgement. Publication of contract information is being carried out as quickly as possible in line with government transparency guidelines.”

Spending watchdog the National Audit Office has prepared a report on government procurement during the pandemic. It is understood the report is with DHSC for factchecking and due to be released this month.

“It’s astounding that there could be a gap this big between what the government spent and what it has told the public it paid,” said Labour’s shadow Cabinet Office minister, Rachel Reeves. “There has been a whole catalogue of contracts that are either opaque, wasteful, unaccountable, or linked to Tory friends and donors. It’s little wonder that trust in the government’s handling of public contracts is dropping like a stone.”

The gap between the value of contracts awarded and the value of those published has been caused by delays in meeting the 30-day deadline. Research firm Tussell, which was commissioned by Good Law to monitor contract notices, said Covid-related awards are taking an average of 78 days to appear, compared with 41 days for non-Covid awards.

“While the Department of Health has published £12.4bn of Covid-response contracts, we know this is still not the full picture of its spending to date,” said Tussell founder, Gus Tugendhat. “It may be that the lag in publishing is even greater than that reported here.”
Add Comment