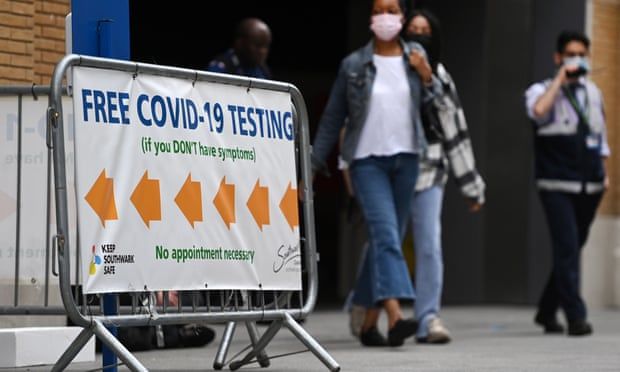 The daily number of Covid cases reported in the UK has risen for the second day in a row, although experts have cautioned against drawing premature conclusions from the fluctuations.

While the recent drop in cases has been much discussed, according to Dr Claire Bayntun, vice-president of the RSM and clinical consultant in global public health, there has also been a recent drop in testing.

Speaking at an online seminar hosted by the society, she said: “I’ve just come from a meeting with colleagues at PHE [Public Health England], and in fact they were just confirming there’s been a 20% reduction in testing over this very recent period,” she said – although it was unclear whether this related to the UK or England alone. 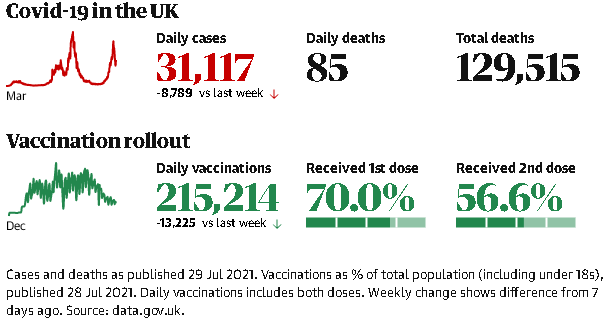 Bayntun added that PHE believed “there was very clear uptick [in] rate, resulting in the peak following the Euros, which again was expected”, noting that while at present there was a rise in hospital admissions and mortality, the situation may, potentially, have improved.

The reduction in testing chimes with data from the government coronavirus dashboard that reveals the total number of tests conducted in the UK fell by just over 14% for 22 July to 28 July, compared with the previous seven days (15 to 21 July).

While the latest flu and Covid surveillance report from PHE suggests there may have been a slight decline in the prevalence of the virus, Hugh Montgomery, a professor of intensive care medicine at University College London, who also took part in the RSM seminar, suggested the decline in testing may not only be down to fewer infections.

“Of course part of that might be because there are 20% fewer people with any symptoms that want testing, but most of our evidence would say that people are avoiding testing so numbers may be higher than they are,” he said, although he noted that it did seem as if cases had recently fallen to some extent.

Earlier in the meeting, Montgomery said of such avoidance: “Increasingly, it appears that lots of people don’t want to be tested or swabbed partly because it might stop them going on holiday, etc.”

While Montgomery said the current data was not “desperately reliable”, particularly on cases, he added that at present there were about 25,000 to 27,000 cases a day in the UK, with approximately 850 admissions a day and above 90 deaths. Allowing for a time lag between diagnosis and admission, about 2% of cases were currently admitted to hospital, he added. 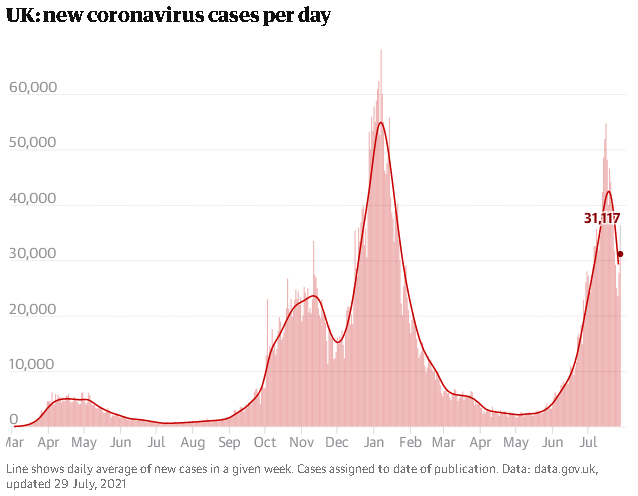 Montgomery also raised concerns about the uptake of Covid jabs, saying the latest PHE figures showed current vaccination rates were “woefully low”. According to the latest report by PHE, vaccine uptake for first doses in England appears to have largely levelled off in all age groups. At present, 95.5% of those aged 75-79 have received at least one dose, compared with 59.9% among those aged 25-29.

“When I talked to friends of mine who work in vaccination centres, I spoke to one who said that she was there on Monday and they had 92 booked slots and they had eight people turn up,” he said, adding that some people had decided Covid was no longer a problem, while others believed in the conspiracy theory that the vaccines contain microchips.

Montgomery said new mutations would occur and noted that many scientists were concerned about lifting restrictions while many people are still not yet fully vaccinated. More than one in 10 adults in the UK have yet to receive their first dose of a Covid jab and the vast majority of under-18s have not been vaccinated.

“We are indeed I think running that risk of letting it run wild,” he said.

Montgomery, 58, said he did not believe life would return to normal in his lifetime and that people would remain cautious, adding that mask wearing should continue while hopefully people will try to live more of their lives outside.

Unless the virus mutates into something akin to the common cold, he said, “I can’t see the occasion when I’m going to want to be crammed into the pub shouting at the rugger in the autumn internationals or the Six Nations in the way that I used to, and that’s a shame, because I used to very much enjoy a pint in my hand and shouting at the television set, but I won’t be doing that.”

Dr Simon Clarke, an associate professor in cellular microbiology at the University of Reading, who did not attend the meeting, said current datasets were “chaotic” and reflected the confluence of many different factors at the same time. “Likely a combination of school summer holidays, hot weather, and the lifting of restrictions,” he said. “Hopes have been pinned on the overall trend heading downwards, but a few days’ infection numbers here or there are in no way a reliable way to predict what the future holds.”