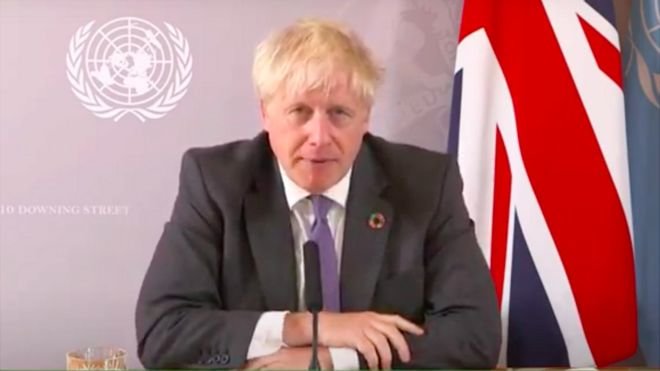 UK can be 'Saudi Arabia of wind power' - PM

Prime Minister Boris Johnson says he wants to make a "big bet" on renewables, turning the UK into the "Saudi Arabia" of wind power.

Speaking via video link to a climate roundtable discussion at the UN in New York, Mr Johnson said the country held "extraordinary potential for wind".

He said the UK should embrace a range of new technologies to achieve its goal of net zero emissions by 2050.

The UK holds the presidency of the UN climate conference, known as the COP.

But because of the coronavirus crisis, the annual gathering will not take place this year. It has instead been postponed until November 2021.

The Prime Minister said the UK had an ambitious agenda for the meeting and called on other countries to be "similarly ambitious". He praised the recent pledge by China to achieve carbon neutrality by 2060.

Mr Johnson reiterated his government's pledge to "build back greener" after the Covid-19 pandemic, through a green industrial revolution. He promised to deliver thousands of new jobs in the process.

As regards wind power, Mr Johnson said: "We've got huge, huge gusts of wind going around the north of our country - Scotland. Quite extraordinary potential we have for wind."

On the question of new technologies, the Prime Minister also said he wanted the UK to take the lead in carbon capture and storage (CCS) technology, in which greenhouse gas emissions are captured from sources such as power stations and then stored underground. 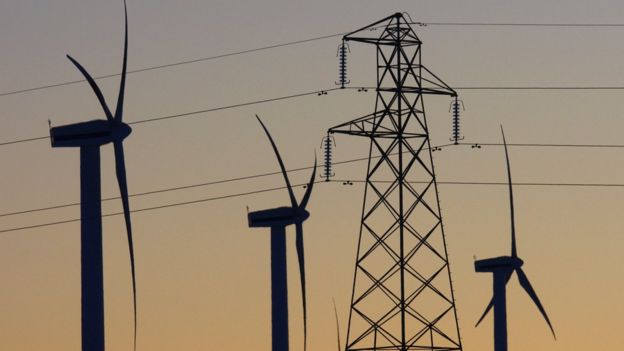 Mr Johnson said this was a technology he "barely believed was possible, but I am now a complete evangelist for".

He said the country would also be investing in renewable hydrogen fuel technology "for trucks, for trains, even perhaps for planes - for vehicles that aren't readily capable of being moved by electric batteries".

Like many other countries, he said the UK government was also thinking of bringing forward the date for phasing out new petrol and diesel cars. It's thought that date will be 2030, with 2035 for plug-in hybrids - but this has not yet been confirmed. This would help accelerate the take-up of electric vehicles (EVs).

The government would be continuing its ongoing investments in solar power and nuclear energy: "I do think nuclear has to be part of the mix," the Prime Minister said.

Something that might have got a bit lost amongst Mr Johnsons references to the UK not "lagging on lagging" or the need to get hydrogen "grunt" to power the nation's trucks was just how important the Glasgow conference is.

It was only at the UN climate conference in Paris in 2015 that the world actually agreed that all nations needed to do their bit to reduce greenhouse gas emissions.

Even as the Paris conference closed, the participants knew the commitments made were not sufficient to meet the UN's stated goal of keeping temperature rises well below 2C.

That is why they agreed to review their ambitions every five years. The idea is that they will keep raising the bar, doubling down on the efforts to moderate climate change.

Mr Johnson's goal today was to urge them to bring the boldest possible carbon cuts at a new meeting marking the anniversary of the Paris agreement on 12 December.

What they bring to that meeting will kick off a year of negotiations designed to get them to go even further eleven months later at Glasgow.

So Mr Johnson was beginning a process that will determine how successful the conference will be and - much more important - will also determine the future direction of global climate. 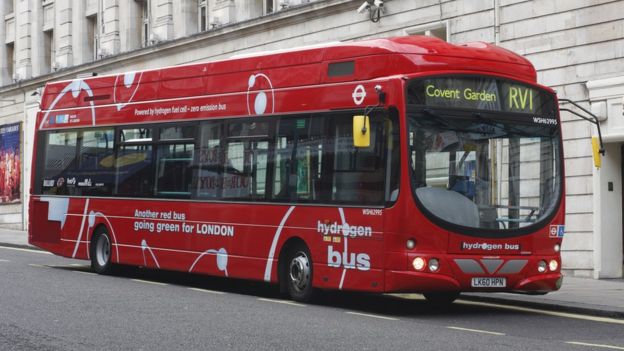 The UK plans to invest in hydrogen-powered vehicles

In addition, homes would have to be improved so that they emit far fewer emissions. "Putting in lagging, changing the way the windows are configured, all kinds of things - changing the boilers. You can do so much to make a home less carbon-emitting.

"The UK may sometimes be accused of lagging in some things my friends, but we will never be lagging in lagging."

Mr Johnson said the UK's greenhouse gases were 8-10% down in 2020 on previous years. But added: "The bad news is we've achieved that by sustaining an appalling economic shock in the form of coronavirus.

"The only way we've done - or we're going to do it - is as you can imagine because our planes aren't flying, our people aren't moving, our cars aren't travelling and our industry isn't producing emissions in the way that it normally would."

At the roundtable, Ursula Van der Leyen, president of the European Commission, said that keeping global temperature rise under 1.5C - considered the gateway to dangerous global warming - was still possible "if we act quickly and if we act together".