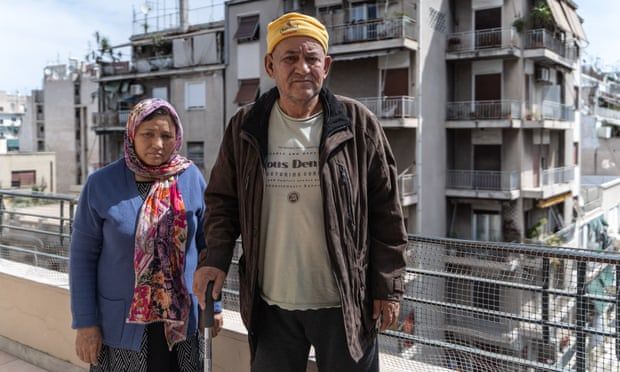 The Home Office has been accused of failing to reunite vulnerable refugees who have the right to join family in the UK under EU law, leaving lone children and torture survivors stranded.

The government faced widespread criticism when it announced that family reunion law would no longer apply after the UK left the EU, and it promised that cases under way on that date would be allowed to proceed.

But charity Safe Passage and the UN refugee agency (UNHCR) have told the Guardian that since Brexit there has been no clear legal way to arrange transfers. Lawyers in Greece and Italy said the Home Office has stopped responding to requests to rearrange family reunions delayed by Covid.

One Afghan couple, both victims of severe torture under the Taliban, have been stuck in Greece for nearly a year after being given legal permission to join their son and his family in the UK.

Ewaz, 71, and Safora Faqiri, 64, arrived on the Greek island of Lesbos in January 2019. The couple, from Baghlan province in Afghanistan, had been beaten and tortured by the Taliban, which left them both with false teeth. “They really beat me, especially in the legs. They knew my son lived in the UK,” said Ewaz, who uses a walking stick because of the beating.

Their family reunion application was granted last August, and under EU law they should have travelled to the UK within six months. But Covid flight restrictions led to delays in theirs, and many other cases. Their lawyers said that because the UK has left the EU, there is no clear route to rearrange their transfer.

“Our grandchildren ask us every day why we aren’t coming to their house,” said Ewaz. “We’ve been living like this for a long time and we are feeling really hopeless.”

“I’ve been feeling really depressed,” said Safora, holding back tears. She has serious health problems and has been scared to leave the house during the strict Greek lockdown. “I’m just hoping there is a way to get out of this situation as soon as possible.”

“The only person who can help us is our son,” Ewaz added. “Please don’t put us in our grave here in Greece.”

Lawyers said theirs is one of at least 80 cases of individuals with a right to be in the UK who have been stranded because the Home Office has not made it clear how the transfers can go ahead outside EU law.

Amanda Muñoz de Toro, from Fenix Humanitarian Legal Aid, is the couple’s lawyer. She said the current problems are in a long line of difficulties created by the Home Office.

“It took the Fenix team, and our legal partners in the UK, three applications and five appeals for the UK to finally grant permission for the couple to join their son. Throughout the 18-month process, the UK repeatedly took steps to frustrate the process and avoid their legal obligations.

“Although it was the responsibility of Greece to transfer the couple before the six-month deadline, before Brexit, there were options to ask for an extension. As a result of the UK’s exit from the EU, there is no longer a legal procedure for these cases. Without a legal framework to pressure, this is now a political issue rather than a legal one.”

Safe Passage said it had seen similar problems in Italy and France.

“Before Brexit, there was a clear process for children to join their families in the UK, but since then the government has failed to communicate effectively with European authorities,” said Bethany Gardiner-Smith, the NGO’s chief executive.

Ali, a 17-year-old boy from Eritrea, has been alone in Italy since last summer waiting to join his family in the UK. He said: “My life has got worse since Brexit. I received a positive answer for my family reunion 10 months ago, but I live always in false hope. The next day, the next month, I think I’ll be going to my family in England. I hate my life.”

Ali’s lawyers said they believe the Home Office has deliberately stopped engaging because the six-month transfer deadline has passed, which means they may be able to avoid accepting his case.

“Flights were cancelled many times because of Covid,” said Giulia Guietti, a lawyer from the Italian refugee and asylum-seeker organisation Cidas. “We needed to rearrange the transfer but from 1 January, after Brexit, the Home Office stopped replying to every single communication. Not only to us, but they don’t reply to the Italian Dublin [regulation] unit. They do respond to some cases. But ones where the deadline has passed and they need to give permission again, they don’t. We are almost certain this is deliberate.”

A UNHCR spokesperson in Italy said it was also worried about the lack of information coming out of the UK. “Long waiting times for the family reunion procedure under the Dublin regulation have been further complicated in the months following the UK’s exit from the EU.

“Without clear answers, minors often lose faith in the possibility of reuniting through a regular procedure and decide to try to reach their families on their own, risking abuse and exploitation.”

In a response, the Home Office said: “Protecting vulnerable children is an absolute priority for the government. In 2019, the UK received more asylum claims from unaccompanied children than any other European country, including Greece and Italy. Once the UK accepts a request to transfer a child, it is the responsibility of the country that submitted it to make necessary arrangements to complete the transfer and we work with them to ensure this happens as quickly as possible.

“The UK provides a number of routes for people to reunite with family members in the UK under our immigration rules.”