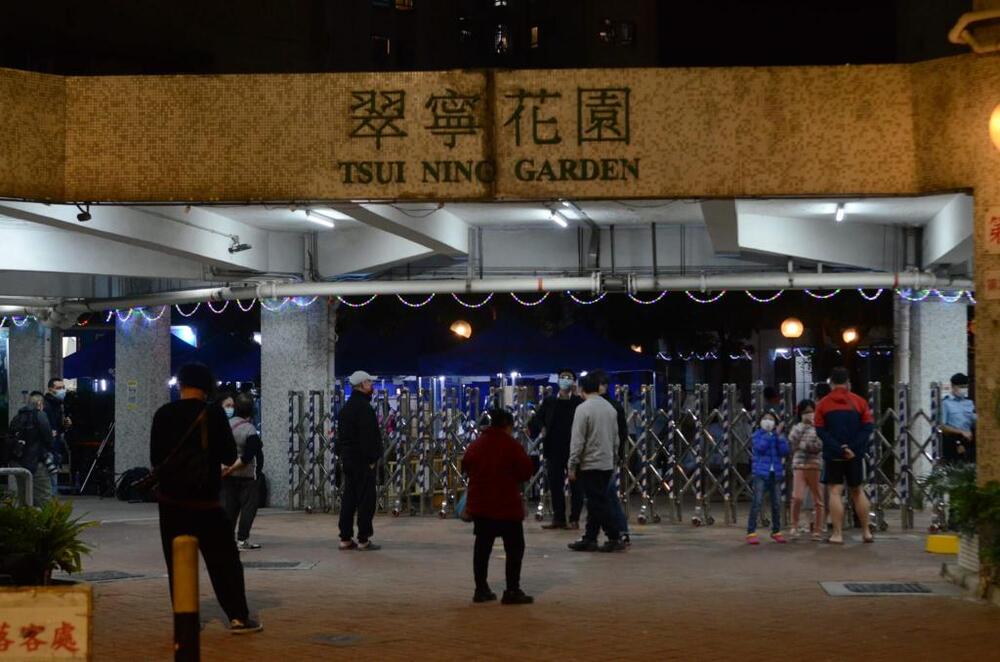 Block 2 of Tsui Ning Garden in Tuen Mun was locked down on Tuesday evening after a 42-year-old surveyor who lives there was reported as the city's first unknown source case since the Omicron outbreak.

The lock down is expected to be lifted at 6.30am Wednesday.

Residents there must undergo compulsory testing by 12am Wednesday. Vaccinated people are required to undergo the testing as well. Only those who had tested negative between Sunday and today (Tuesday) with proof could be exempted from taking the test again.

People who had been to there for more than two hours from December 12, 2021 to today must also undergo the testing by Thursday (Jan 6).

The surveyor lives there with his wife and daughter. He tested preliminary positive of Covid-19 on Tuesday and was found carrying the N501Y and T478K mutant strains, suggesting possible Omicron infection.

Preliminary investigations failed to identify his source of infection, making him the first unknown source case since the Omicron outbreak.

He suffered from headache and fever on Sunday (Jan 2), and visited a private doctor a day later where he got tested. His sample tested preliminary positive Tuesday afternoon. Further genetic sequencing has to be conducted to confirm whether he carries the Omicron variant.

His CT value ranged around 18 after hospital admission, indicating a high viral load. He is not vaccinated and he last went to work at Unit A, 13/F, Lee & Man Commercial Center on Electric Road in North Point on December 31, 2021.

On another note, Hong Kong saw 39 new coronavirus cases on Tuesday, involving 16 men and 23 women aged 13 to 66. Three were listed as import-related cases, while the rest were imported cases.

The three import-related cases involved a 35-year-old man and two women aged 62 and 66.

The 66-year-old woman dined at Moon Palace on December 27, 2021. She was sent to Penny's Bay quarantine center on December 31 and later tested positive.

The center also banned the landing of passenger flights operated by five airlines for two weeks from today until January 17.