The rail dispute solution may come down to who has a higher pain threshold: the pay-sacrificing workers or the compensation-paying Treasury.

Rail minister Huw Merriman will meet union leaders including Mick Lynch of the RMT on Monday after three weeks of unseasonal disruption left the two sides apparently as far apart as ever.

While both say they are ready to talk, unions remain committed to further strikes if required and the government is legislating to limit industrial action, an inauspicious background to the first direct talks between ministers and bosses since November.

Ultimately, progress will depend on concessions on both sides, but at its heart are financial considerations that have changed radically in the three years since COVID-19.

These changes, driven by necessity and government strategy, have fundamentally altered the incentives for the constituent parts of the fiendishly complex rail network to do a deal.

Understanding those changes may help explain why a dispute that began in high summer seems no closer to resolution in the depths of the following winter.

The pandemic has dramatically and perhaps permanently changed the financial model. In 2019-20, the last full year before COVID struck, there were 1.74 billion passenger journeys generating £10.4bn in fares. Government subsidy amounted to £6.5bn. 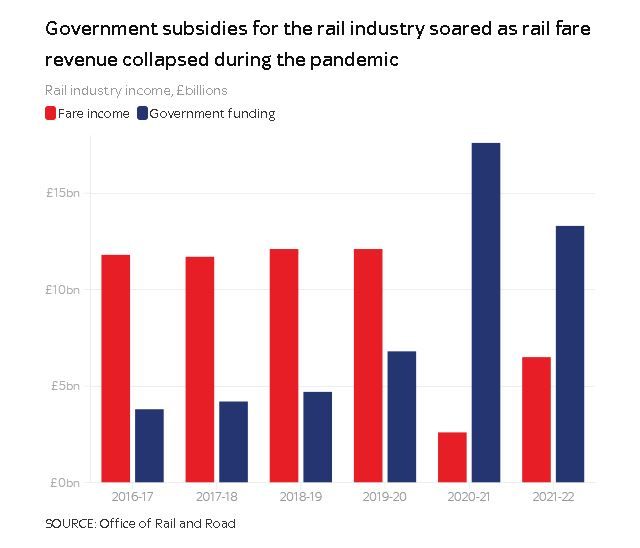 The following year COVID lockdowns and working from home saw the position flip, with a meagre 388 million passenger journeys producing just £1.8bn in fares, and government support to keep the wheels turning rising to £16.5bn.

Even in the year to March 2022, with the pandemic in abeyance and recovery under way, there were fewer than a billion journeys, fares revenue was still below £6bn, and the government was putting in £13.3bn, more than double the pre-COVID cost to taxpayers.

So when Network Rail says the railways no longer have the revenue to meet inflation-matching wage demands they are at least half right. 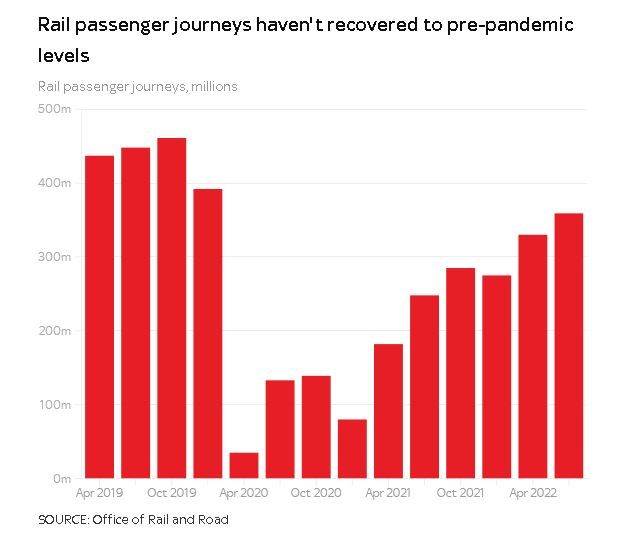 Yet the most recent pay offers, of 5% plus 4% over two years from Network Rail, and 4% plus 4% from the train operators, are below the 5.9% fare rise that will apply from March.

But there is another equally important change underlying this dispute; where that revenue goes.

In response to the pandemic the government tore up franchise agreements with privately owned train operators and replaced them with service contracts, removing at a stroke the revenue risk from train operators.

Instead of fares going to train operators who paid guaranteed revenue to the government, fares now go directly to the Department for Transport, which pays the operator to run services.

Crucially though, the train operators still get paid when workers are on strike, receiving compensation for lost revenue of £20m-£25m a day. The RMT claims that adds up to £340m paid by the government to private companies since the dispute began.

The Department of Transport would not provide a figure for total compensation paid but did say: "We do not tend to penalise the train operators for failing to run a full service on a strike day given it's not the train operators who have opted to strike."

A changed calculation for Network Rail

While the new contracts have reduced the incentive for train companies to do a deal by removing their risk, the restructuring has also changed the calculation for Network Rail, involved in its own dispute with the RMT.

Under the old franchise system, if trains could not run because Network Rail signalling and station staff were on strike, it compensated the operators for lost fares.

That meant that for train operators, Network Rail and the unions there was a basic calculation when considering a pay deal.

If the pay demand from workers was cheaper in the long run than the lost revenue or compensation cost of strike action, a deal could, and usually would, be done.

That basic calculation has helped rail workers remain one of the few public sector groups whose pay has kept track with inflation since 2010. With revenues collapsing since COVID that balance of incentives has changed.

Taxpayers are now the ones bearing the overwhelming cost of industrial action, not the employers, meaning it is ministers and the Treasury whose appetite for financial pain is being tested.

On the union's side it is still workers who pay for strike action in lost pay and their resolve will be weighing on the minds of bosses and ministers this weekend.

Rail workers are paid on four-week shift cycles and each of the six waves of strike action so far has taken place in a separate cycle limiting the loss of wages from a single wage slip.

The cost is adding up for RMT members even with support from strike funds that ease the blow. They have lost up to 19 days pay since the first strikes in June, and at least four days pay in each of December and January, a significant hit for anyone.

As Mick Lynch considers his next move he will be weighing up how much more his members can bear. They have shown remarkable solidarity since the dispute began but in a cost of living squeeze it may not be infinite.

Barriers to a deal

There are many issues that could prevent a deal, not least the new demands to change certain working practices unions believe have been deliberately introduced to derail progress.

The planned restructuring of the entire network under a new body 'Great British Railways' is also muddying the waters.

Political support for the Boris Johnson-Grant Shapps reform has fluctuated with the political chaos in Downing Street, leaving the industry uncertain if and when permanent change will come, and the railways effectively being run and paid for by ministers who claim to oppose nationalisation.

In the short term though this dispute may come down to who has the higher threshold for the financial pain: the Treasury paying hundreds of millions in compensation, or rail workers sacrificing their pay.