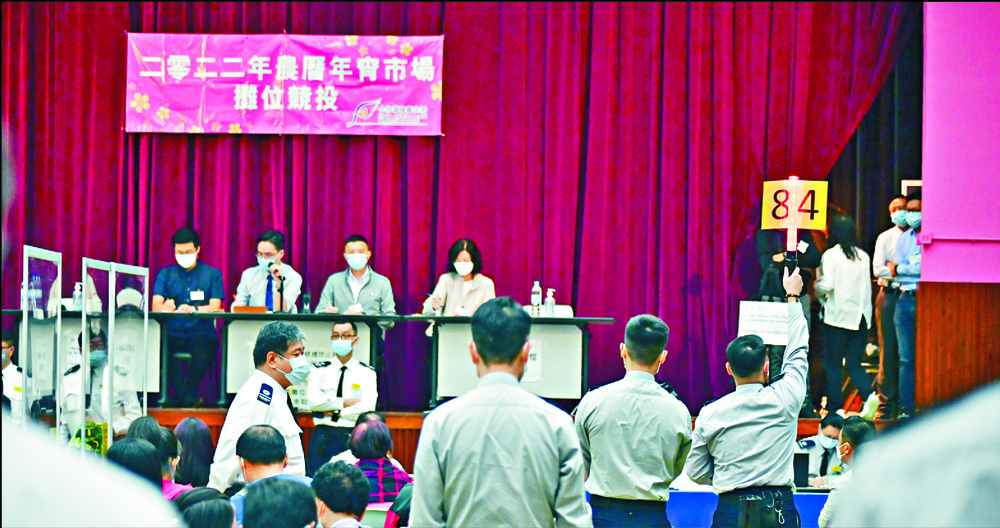 Competition for stalls was fierce on the last day of auctions for the city's biggest Lunar New Year fair in January. The highest bid for a flower stall reached HK$60,500.

The 55 stalls up for auction yesterday are near Victoria Park's Causeway Road exit opposite the Central Library. The most expensive stall at this year's fair was HK$50,000.

The government yesterday said all 175 wet goods stalls were let out this year and the total revenue of the auction was more than HK$4.5 million, up 83 percent on last year's HK$2.4 million.

"The successful bids ranged from the opening price of HK$5,440 to HK$60,500, which averaged out to about HK$25,770," said a spokesman for the Food and Environmental Hygiene Department.

A daffodil seller, Leung, who won with his bid for the priciest stall, said the price was higher than he expected but he still bid for it because he had been selling flowers at the spot for many years.

Leung, who also got another stall for about HK$40,000, said he was confident of earning up to HK$1 million at the fair this year.

"I think the business this year will be better as people cannot travel amid the pandemic and can spend more on flowers," he said.

But Leung said he will not pass on the higher cost of the stall to customers, saying he hopes to sell more products with lower prices.

One of the bidders expected stall owners to be able to earn from HK$500,000 to HK$1 million.

Another flower seller, "king of orchids" Yeung Siu-lung, who bid for 16 stalls last year, said he could only get two stalls in yesterday's auction.

Together with the six stalls he got on Monday, he has only eight stalls this year.

"The auction this year was fierce and the stalls are expensive," Yeung said.

There were arguments among bidders and government staff had to separate them.

The fair will be held from January 26 to February 1. All stall owners and staff members are required to be vaccinated and test negative for Covid.

The auctions for stalls of the Lunar New Year fairs at Fa Hui Park in Sham Shui Po and Kwun Tong Recreation Ground will also be held at the Lai Chi Kok government offices on November 17 and 18.

Auctions for stalls at Morse Park in Wong Tai Sin and Cheung Sha Wan Playground in Sham Shui Po will be held at the same location on November 19.

The auction for stalls of the Tat Tung Road Garden fair in Tung Chung will be held at Harbour Building in Central on November 22.
#covid
Add Comment