Head-to-head sees open arguments over tax and identity politics, with no candidate willing to say Boris Johnson is honest

The Conservative leadership race has exploded into acrimony and recrimination after the first televised debate saw open arguments over tax and identity politics with also none of the five candidates willing to say Boris Johnson is honest.

Coming hours after Liz Truss sought to reinvigorate her faltering campaign with a sudden announcement of new tax cuts costing more than £20bn a year, Rishi Sunak the ex-chancellor, openly ridiculed his former colleague’s plans during the Channel 4 broadcast on Friday evening.

Condemning what he called a wider “unfunded spree of borrowing and more debt” among his competitors, Sunak condemned the Truss’s proposal to put off repayments of public debt built up due to Covid.

“There is no such thing as Covid debt,” a visibly irritated Sunak told the foreign secretary. “Debt is debt. And the answer to too much borrowing can’t be yet more borrowing. It’s as simple as that.” 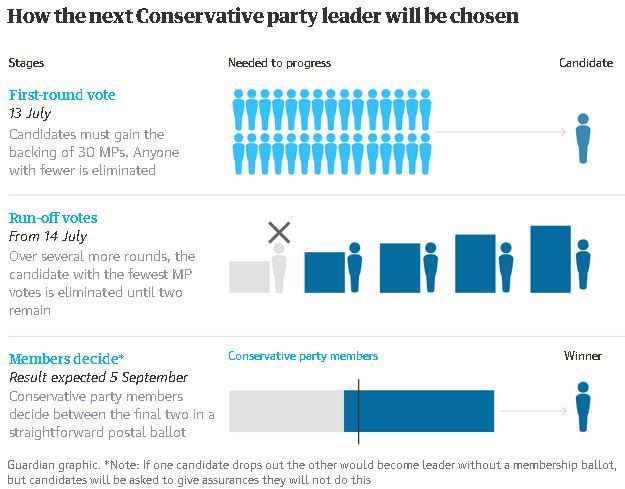 When Truss argued that better monetary policy would mitigate inflation even with tax cuts, Sunak snapped: “Liz, we have to be honest. Borrowing your way out of inflation isn’t a plan, it’s a fairytale.”

In an often difficult night for all the candidates – also comprising Penny Mordaunt, the trade minister and bookmakers’ favourite; the former levelling up minister Kemi Badenoch; and the backbencher Tom Tugendhat – not a single member of the audience of floating voters raised their hands when asked if they trusted politicians.

In a long section on trust, the candidates were asked whether Johnson was honest. “Sometimes,” said Badenoch, while Mordaunt talked about “really severe issues”, and Truss spoke of “mistakes”. Tugendhat won applause by saying, simply: “No.”

A separate show of hands after a debate on energy bills saw just three people say they felt politicians were doing enough to help people. When asked at the end of the debate if it had made them more likely to vote Conservative, only 10 of the audience raised their hands.

A separate spat saw Mordaunt and Badenoch clash with visible enmity about the former’s views on trans rights. When Truss declined to back up her version of events about policies in the government’s equalities office, Badenoch said, “Come on Liz, tell the truth.”

Mordaunt, meanwhile, asked about negative briefings about her from some of the other camps, refused to say she trusted the other candidates. 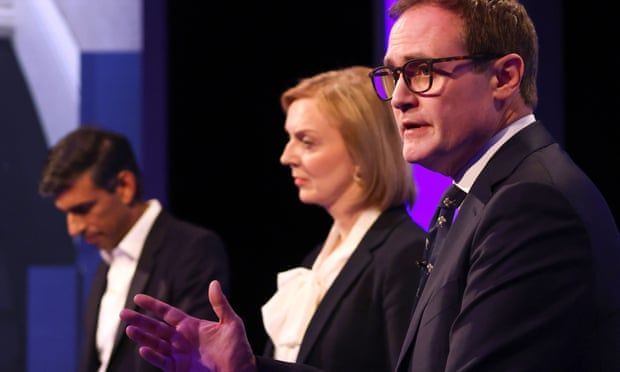 So far, two rounds of voting among Tory MPs – who are gradually reducing the field down to a final two, with a winner then decided by party members – has seen Sunak gain the most support, followed by Mordaunt, Truss, Badenoch and then Tugendhat.

The backbencher, who is expected to be ousted in the next round on Monday, used the debate to seek to set himself apart from the other candidates, all of whom had served under Johnson.

He said: “I’ve been holding a mirror to many of our actions and asking those in our party, those in our leadership positions, to ask themselves, ‘Is that what the public really expects?’”

In an earlier Zoom-based Q&A, hosted by the Conservative Home website, Truss sought to regain the initiative in the race by promising to scrap a planned rise in corporation tax and suspend green energy levies, costing more than £20bn a year overall.

The unexpected offer came on top of an existing pledge by Truss to reverse a rise in national insurance, worth another near-£11bn a year.

“We immediately need to start putting money back into people’s pockets, we know families are struggling to make ends meet at the moment,” she said.

It has been estimated that scrapping the planned rise in corporation tax from 19% to 25% next year would cost about £15bn a year. Suspending green levels on energy bills would cost an estimated £5bn a year.

Labour has condemned an “arms race” of uncosted tax cut pledges among candidates. Sunak has said he would wait to stabilise inflation before cutting any taxes.

In a boost to Truss, shortly after the debate the attorney general, Suella Braverman, who was eliminated from the contest after finishing last in Thursday’s MPs’ vote, reiterated her call for supporters to switch to the foreign secretary.

Braverman is ideologically close to Badenoch, but in a robustly worded message to supporters, Braverman urged them to “look realistically at the numbers” and back Truss, the other candidate seen as being firmly on the right of the party.