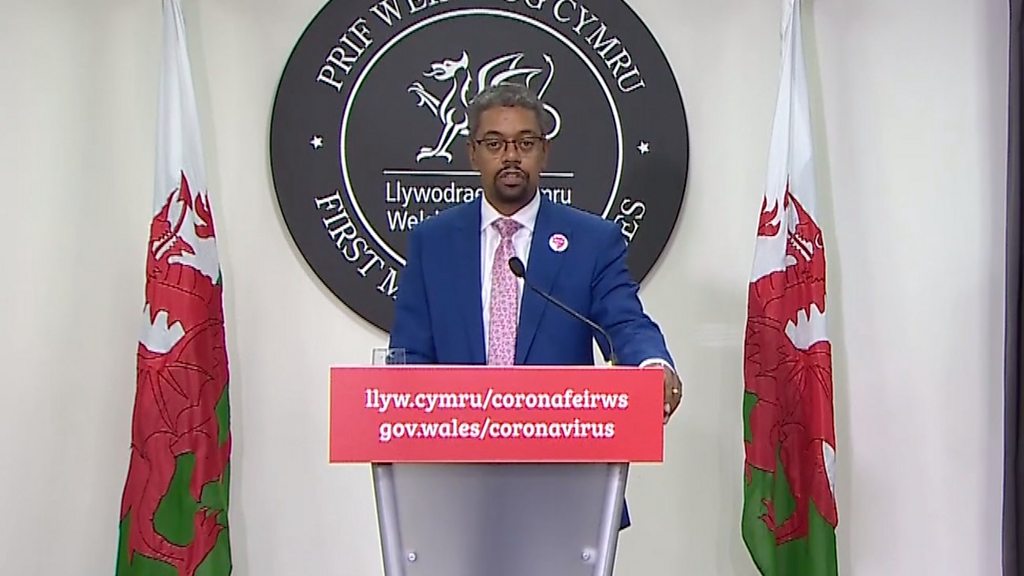 Three more areas of Wales to go into lockdown

Wales' two biggest cities will go into lockdown as part of new restrictions being imposed in three areas.

Cardiff and the county of Swansea go into lockdown at 18:00 BST on Sunday, 24 hours after the Carmarthenshire town of Llanelli.

It means 1.5 million people, about half of Wales' population, will be under lockdown by the end of the weekend.

The restrictions will be the same as those already affecting people living in Merthyr Tydfil, Bridgend, Blaenau Gwent, Newport, Rhondda Cynon Taf and Caerphilly, which are already in lockdown. 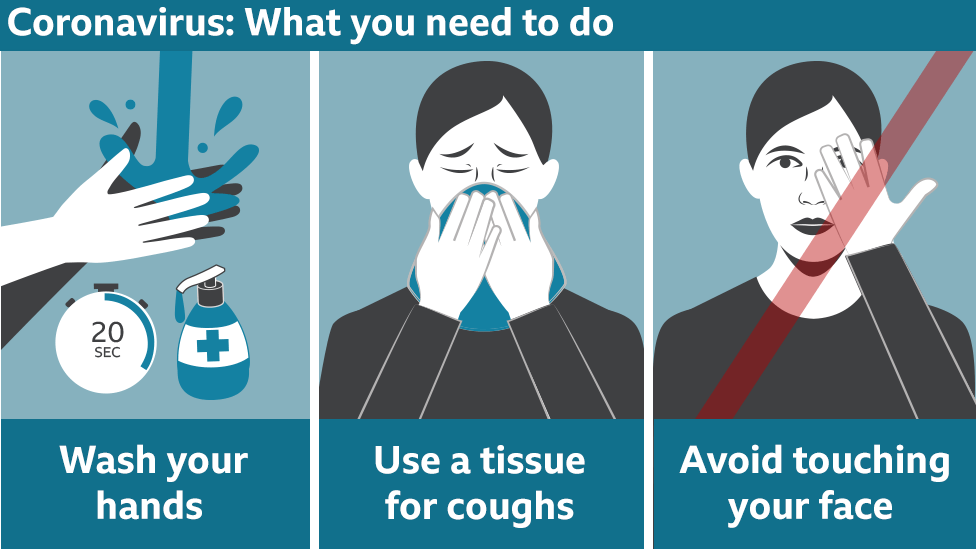 Mr Gething said people in Cardiff and Swansea should not "treat this weekend as a big blow-out".

He also said cases in Carmarthenshire had "overwhelmingly" been linked to Llanelli, with eight out of 10 cases there.

"In Llanelli we have a particular challenge around the town that is well identified, a significant spread that is not in control," he said at a Welsh Government press conference.

Rob Stewart, leader of Swansea council, said: "We have seen a rapid and sharp increase in the number of covid cases in Swansea during the past few weeks.

"So, like much of the population of Wales, we are now in a lockdown. This will mean changes to people's everyday lives but they will help to protect people and our communities."

He described a "balanced judgement" being taken that the rules should come into force in Cardiff and Swansea a day later to "allow people to plan". 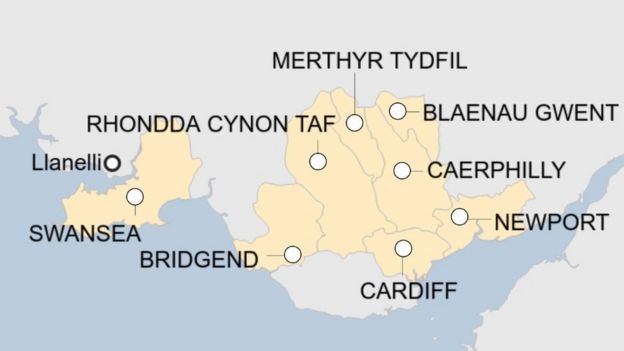 There will be nine areas of Wales under restrictions

The Llanelli lockdown is the first not to cover a whole local authority area. A postcode finder will be made available online to make clear which areas are under lockdown, said Mr Gething.

The majority of cases in Llanelli have been linked to people socialising without social distancing.

Burry Port, which is also in Carmarthenshire, will not be included in the area under restrictions. 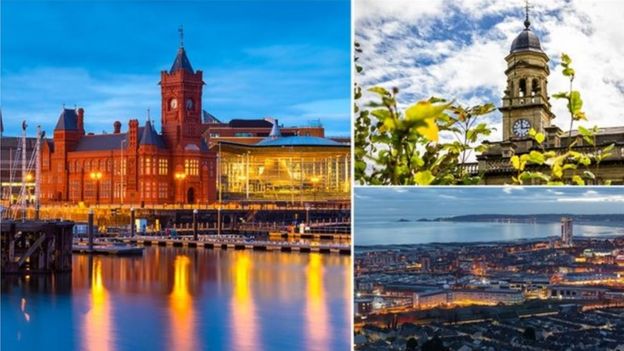 Cardiff, Swansea and Llanelli are the latest areas to be locked down

Meanwhile, cases of coronavirus have been traced to three pubs in Porthcawl, Bridgend county, with customers encouraged to look out for symptoms.

PHW said a number of people had tested positive for the virus after visiting The Royal Oak in South Road, The Marine on the Esplanade and The Pier on the Esplanade on the evening of 11 September.

Gemma Northey, chairwoman of the multi-agency incident management team for PHW, said anyone who has visited the pubs and been identified as a contact would be contacted by the Test, Trace, Protect team and given further advice.

She said those who had visited the pubs and developed symptoms must self-isolate, along with any household members, and book a coronavirus test promptly, but those who were not symptomatic did not need to take action.

How do businesses feel?

The new restrictions mean people in lockdown can only shop in their own counties, or in the case of Llanelli, their own town.

Mike Richards, who owns an antique shop in Llanelli, is angry the town has been singled out.

"It's totally unacceptable," he said. "We're part of Carmarthenshire - the council are supposed to look after us and Carmarthen.

"We'd be goldfish bowls - local customers only - 60% of my trade is from outside Llanelli. I'll have to live with that but I'm not living with Carmarthen having their own way.

"With respect, everywhere else they've locked down an area. We'll be the first town to lock down. Why?" 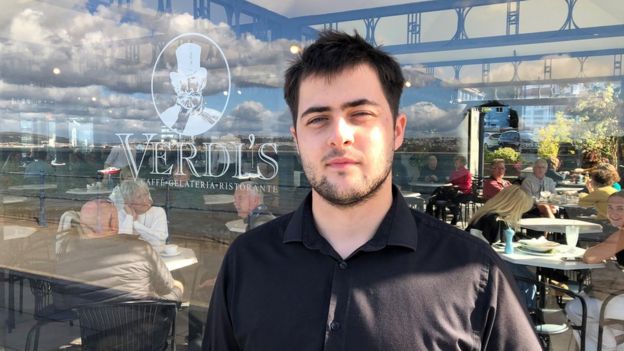 Matteo Moruzzi, from Verdi's cafe in Mumbles, Swansea, said the lack of tourism would hit the business hard.

He said: "We don't just get people coming from other areas of Wales, but also England.

"We had people from Somerset call earlier who'd arranged to come next week but they can't come anymore.

"I think it will affect a lot of the trade. We prepared for the first lockdown but not so much for the local one."

What about university students?

As students return, Mr Gething said the effect on university towns will be monitored.

He said: "One of the things we'll need to do is to understand how the pattern is changing within those university towns and cities once students have been there for a period of time.

"At this point in time with a large movement of people across the UK, we need to understand what that does in terms of local prevalence so I don't think now is the time to make a definitive choice about what would happen in the end of your recess but it's an obvious question for us to consider."

What can I do? 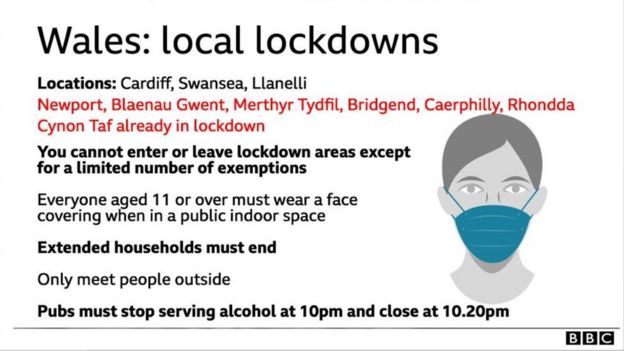 Under the rules, nobody is able to enter or leave the eight counties and one town without a "reasonable excuse".

People are allowed to travel to outside the area for a limited number of reasons.

These include going to work if they are not able to work from home, to go to school, give care and buy food or medical supplies.

Dr Keith Reid, executive director of public health at Swansea Bay health board, said: "How long Swansea stays in local lockdown is entirely up to the people of Swansea. You have it in your gift to end this lockdown as early as possible and save lives."

What about areas not locked down?

Aside from the areas being locked down, Dr Robin Howe of Public Health Wales, said Vale of Glamorgan, Carmarthen, Anglesey, Conwy, Denbighshire and Flintshire were all "areas of concern to us and we are watching the data from there carefully".

Ministers and officials said they would look at data over the weekend before deciding whether restrictions needed to be extended to Neath Port Talbot, Vale of Glamorgan and Torfaen, Mr Gething said.

Meetings will also take place next week with council leaders in north Wales, where Mr Gething said the picture was "more mixed".

Leader of Neath Port Talbot council, Rob Jones, said it was "inevitable" the county would follow neighbouring Swansea into local lockdown if cases continued to rise.

Carmarthenshire council leader Emlyn Dole said: "It is worrying to see how sharply the number of positive cases has risen in the Llanelli area, and action has had to be taken to help stop the spread and break the chain of infections concentrated in this area to prevent a whole county lockdown.

"We must all do the right thing, follow the advice and protect each other. In parts of Llanelli, we're asking people and businesses to make even greater sacrifices - we fully appreciate the impact this will have, but there is no other way. We must stop the spread."