Thousands of people have gathered in London to protest against the government’s lack of action in tackling the cost of living crisis.

Protesters marched from Portland Place to Parliament Square for a rally with speakers including Frances O’Grady, the general secretary of the TUC, which organised the event.

O’Grady was met with applause and cheers as she gave a speech to the crowd. 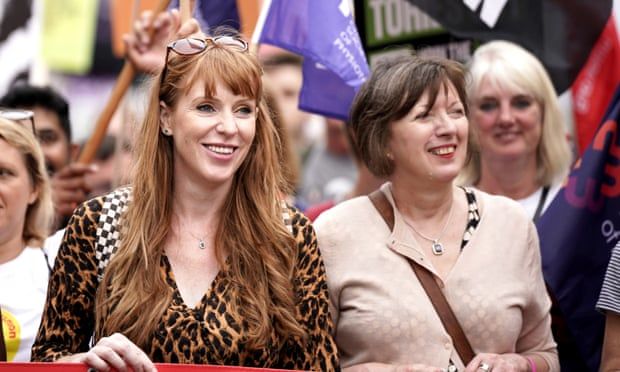 The Labour party deputy leader, Angela Rayner, (left) and the general secretary of the TUC, Frances O’Grady, take part in the protest.

Andy Lewis, a teacher at a sixth-form college in Sunderland, was among those at the rally. “Since Cameron and austerity, teachers have had a real-terms pay cut of £10,000,” he said.

“We now have teaching assistants ringing in saying that they can’t afford to come in. We’ve got admin staff saying we can’t afford the cost of transport to get in.

“My wife has a friend who is a headteacher, last week she had seven staff off because of the cost of living. It’s not just about getting a pay rise, it’s about the knock-on effect that this has on children.”

Local government worker Niamh, 24, from Highbury, said she had decided to attend after seeing the impact of benefit cuts firsthand through her work. 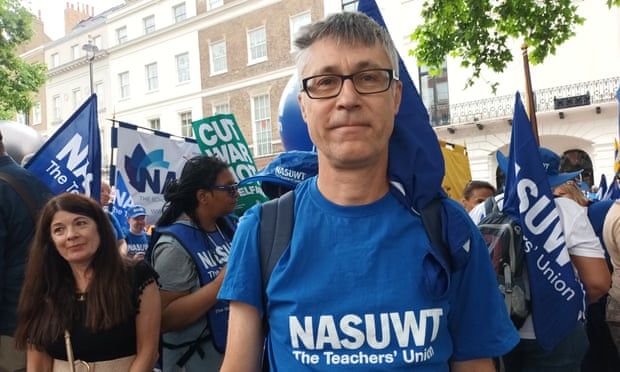 “I work in local government, where we have a lot of dealings with residents. We can see that demand for support has increased. But with reduced government funds, we’re left with very limited options to help people.

“Our benefits system is broken. Really what we need is for benefits to increase, like housing allowance and the benefits cap. We’ve seen people with children who have just had a baby and say they don’t know how they’re going to be able to buy food and pay their rent. It’s very stark.”

The TUC said there was “harrowing” evidence of the impact the crisis on families, with workers suffering the “longest and harshest” squeeze on earnings in modern history. O’Grady said she had heard one story of children keeping back part of their school lunch to take home for their evening dinner.

“Prices are skyrocketing, yet boardroom bonuses are back to bumper levels,” she said. “Everyone who works for a living deserves to earn a decent living, but UK workers are suffering the longest and harshest squeeze on their earnings in modern history.

“If we don’t get pay rising across the economy, we will just keep lurching from crisis to crisis. This cost of living emergency has not come out of the blue. It is the result of more than a decade of standstill wages.”

Workers have lost an average of almost £20,000 in cumulative earnings since 2008 because pay has not kept pace with inflation, the TUC said, adding that it was the biggest loss of “real wages” since the 1830s. 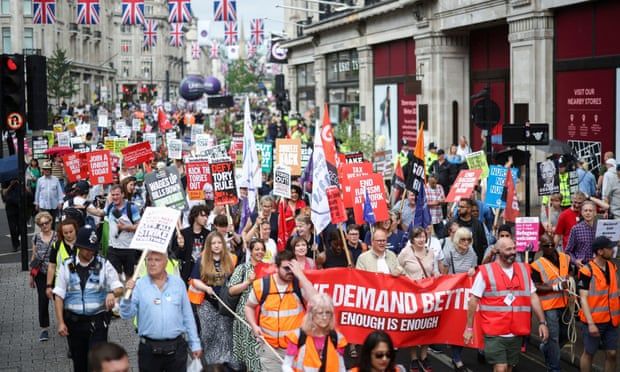 The Britain Deserves Better protest was organised by the TUC.

O’Grady said it was “gut wrenching” to hear how workers were struggling, with no safety net to fall back on and the pay slump showing little sign of slowing.

She told PA Media that the Conservatives were now the “party of pay cuts”, accusing the government of turning its back on those who made such “extraordinary sacrifices” by continuing to work during the Covid crisis.

Boris Johnson was “cynically abandoning” his commitment to a high-wage economy, she claimed.

“He and other ministers are treating workers like Oliver Twist by telling them not to dare ask for a decent pay rise,” she said. “The last thing we need right now is for wages to be held down.

“We cannot be a country where nurses have to use food banks to get by.”