Tang Ping, 31, a mother-of-two in the southern Chinese city of Nanning, says in 2014 when her first child was six months old, her husband – an academic – began routinely beating her. She felt hurt but also ashamed, blaming herself for not being a good enough wife. She did not know what to do.

Five years ago, after another round of violence, she finally summoned the courage to report her husband to the police. “I was told my injuries were not serious, therefore they could not intervene,” she says, as she prepares to legally dissolve the marriage this week.

China’s anti-domestic violence law has been in existence since 2016. Yet even after the legislation took effect, domestic violence was still regarded by many as a taboo. Like Tang, some victims would initially see violence against women as a part of family life.

But Tang could not bear the haunting silence any more. “Look at all the violence against women exposed in the media. This is another pandemic,” she says, referring to the vicious attacks last week against women in the northern Chinese city of Tangshan.

“Women should speak up against domestic violence, and the public should understand, like in the case in Tangshan, that women are often at the receiving end of gender-based violence.” 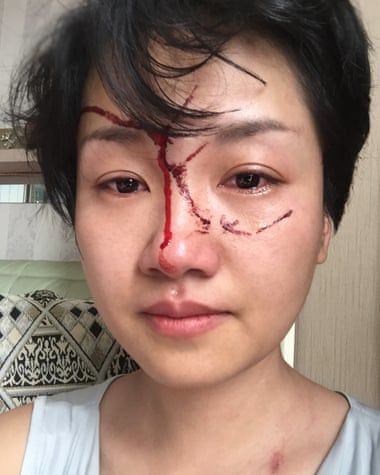 Tang Ping on 3 August, 2019. She was previously told by the police her injuries were ‘not serious’, therefore they could not intervene.

Gender-based violence has made news headlines around the world in recent years. The problem was further exacerbated by the Covid pandemic, says the UN, which calls domestic violence “a shadow pandemic”.

From the tragedy in Nirbhaya in India a decade ago to the killing of Sarah Everard in Britain last year, violence against women has inspired action on a grassroots level across many parts of the world. But in China, activists say the dismantling of civil society in recent years has made awareness-raising campaigns a lot harder.

“Yes, people are angry about what happened in Tangshan and feel sympathetic with the victims of domestic violence, but to fundamentally change the situation, we ought to address the systemic problem in China today,” says Lü Pin, a New York-based feminist activist who left China in 2015 after the arrests of the “feminist five”.

“Unfortunately, those who can help lead real social change – for instance activists and grassroots civil society organisers – are now deemed by the authorities to be in opposition to the government.”

Activists like Lü worry that incidents like the one in Tangshan could happen again. For years, online comments and videos showing violence against women have flooded China’s cyberspace.

Tang says since she decided to reveal her identity and talk about her case online she has been blamed by some for “irritating her husband in the first place”.

She is not alone. Last year, Xiao Meili, a Chinese feminist revealed on social media that a man threw hot liquid at her after she asked him to stop smoking in a restaurant. To her dismay, Xiao was then repeatedly trolled. Many blamed her for being the one who had caused trouble. Some also wrote: “I hope you die, bitch”, or “little bitch, screw the feminists”. 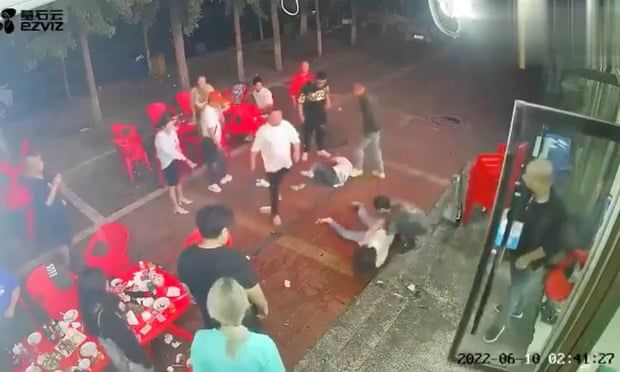 A group of men assault women at a restaurant in the north-eastern city of Tangshan.

Xiao blamed internet companies for not doing enough to stop the spread of misogynistic messages online. In an interview with a US-based website last year, Xiao said Weibo was “the biggest enabler”. “It treats the incels as if they are the royal family,” she said.

But there are signs authorities may be taking action against Chinese internet companies. Last month, a video of the actor Liu Zhoucheng punching and elbowing in front of a camera prompted many to question whether this was how he had beaten his former wife in 2017 while she was pregnant. Liu did not deny the suggestion. Instead, he replied with an emoji of a bloody axe.

Liu was quickly banned from posting on social media. And this week, after the brutality against the women in Tangshan, Chinese state media blamed social media companies for allowing the spread of violent behaviour. 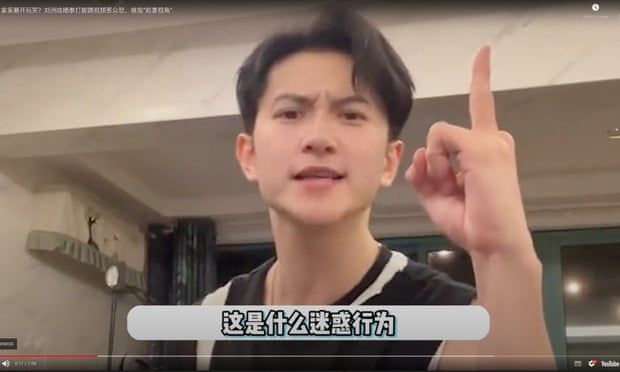 “Turning serious issues into entertainment is against public order and social conscience, and it may send a negative message to the public – especially minors,” writes Legal Daily, a government-owned newspaper, urging social media platforms and content creators to be aware of their social responsibility.

Tang says despite having been on the receiving end of verbal abuse after she revealed online her experience of domestic violence, she is now only focused on how to cut off ties with her husband. She also wants to remind other women how domestic violence damages a family.

Last year, after repeated complaints and with evidence of her injuries, the police finally accepted Tang’s case. They also advised her to take legal action to end the marriage.

But for Tang, the past eight years have been scarring. She says she learned a big lesson in a hard way. “I kept telling myself to swallow it, because I wanted my children to have a complete family. But this was all wrong.”

“Domestic violence is like a plague,” she says. “Once it happens, it will happen again – and again – until you stand up to defend yourself.”