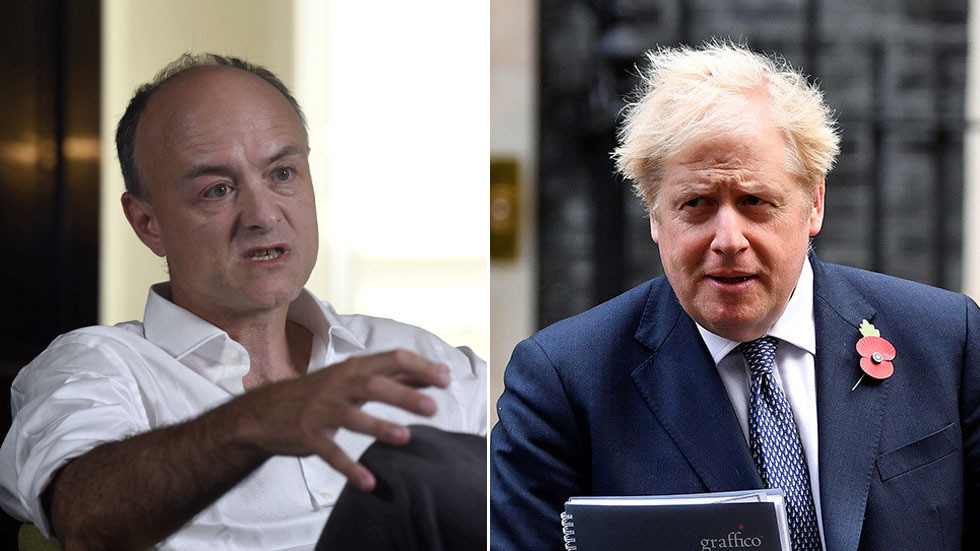 'The sooner he goes, the better’: Former top aide admits plotting to OUST Boris Johnson from office weeks after getting him there

Describing Boris Johnson being PM as “terrible for the country,” Dominic Cummings has revealed that he and other Downing Street aides had plotted to oust him from office just weeks after their landslide December 2019 election win.

In his first TV interview since resigning as the PM's chief adviser last year, Cummings directed a series of criticisms at Johnson, who he claimed “doesn't have a plan” to run the country, “doesn’t know how to be prime minister” and was obsessed with “stupid” projects in transport and infrastructure.

During the hour-long programme, which aired Tuesday night on the BBC, Cummings admitted that he'd been looking to “hasten” the PM’s exit from Downing Street. “Certainly. The sooner he goes, the better. For sure,” he said.

He claimed to have known about Johnson's "hopeless" qualities after they’d worked together on the 'Vote Leave' campaign during the 2016 Brexit referendum. But Cummings worked to get him elected to power three years later only “because we had to solve a certain problem, not because he was the right person to be running the country.”

However, "within days" of the Conservative Party's majority win in the 2019 polls on the back of a promise to "get Brexit done," Cummings claimed the “prime minister's [then] girlfriend [was] trying to get rid of [the Vote Leave staff] and appoint complete clowns to certain key jobs.”

Until the victory, Cummings said, Boris Johnson and Carrie Symonds had been happy to let 'Vote Leave' veterans run the campaign. But, he added, “As soon as the election was won, her view was 'Why should it be Dominic and the Vote-Leave team? Why shouldn't it be me that's pulling the strings?'”

By January 2020, he claimed, the team members began to fear for their positions. “[People] were already saying, 'By the summer, either we'll all have gone from here or we'll be in the process of trying to get rid of [Johnson] and get someone else in as prime minister'," Cummings recalled.

However, he did not detail the means by which Johnson was to be removed from office. The idea was dismissed by senior Tory MP Charles Walker, who told Times Radio that Cummings would have needed to “engineer a military coup” to remove Johnson.

His allegations about Carrie Johnson "interfering" with government appointments in an "unethical and unprofessional way" shed light on the reported power struggle and "big argument" between her and Cummings' prior to his departure from Downing Street last November.

“Carrie's view was, and is, that 'the prime minister doesn't have a plan, and he doesn't know how Whitehall works; someone is going to set the agenda: it can either be the civil service, or it can be Dominic and the Vote Leave team, or it can be me'," Cummings said.

A Downing Street spokesperson told the BBC that “political appointments are entirely made by the prime minister,” but declined to respond to Cummings’ accusations against Carrie Johnson.

The result was, Cummings said, that his working relationship with Boris Johnson had begun to break down “by summer 2020.” The break-up was also apparently fuelled by Johnson being "fed up with the media portrayal of him being a kind of puppet for the Vote Leave team.”

“It was driving him round the bend,” Cummings claimed, adding that Johnson also “knew that I was blaming him for not having acted [to tackle Covid response issues] in September.”

Later in the interview, Cummings alleged that Johnson denied the NHS would be overwhelmed by rising Covid-19 cases last autumn and was reluctant to impose the second lockdown in November, because he did not want to “kill the economy just because of people [aged over 80] dying.”

In recent months, Cummings has been highly critical of the PM and other government officials but denied during the interview that he was motivated by a need for revenge against Johnson, who he claimed not to have spoken to since his resignation.
#covid 19  #covid  #boris johnson
Add Comment