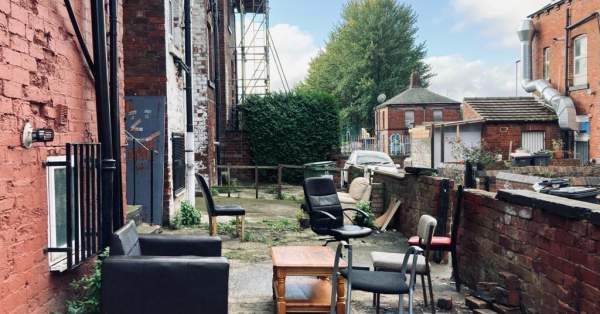 With more than 45,000 people having officially died, Britain has the highest COVID-19 death rate in Europe. It has also the highest excess mortality rate, the term used to describe the number of deaths above and beyond the number expected in normal conditions.

“Up north”, say Londoners, as if it is a different country. And, somehow, it is. In the north, deaths are four times higher than in the south.

The region has the poorest city, Nottingham and, an hour’s drive away, Birmingham – the most dangerous. Scunthorpe is the most polluted one, while Blackpool has the highest number of unemployed people.

Rhyl has the most number of households on benefits and Bradford has been ranked the worst place to live. Then there’s Liverpool, the city which now has one of the highest number of COVID-19 patients and which was the first to go into a second full lockdown. Manchester soon followed.

In Leeds, one in five children live in extreme poverty. Out of its 780,000 residents, 320,000 have an income 60% below the median. Its small neighbourhood, Hyde Park, is a grid of red brick homes with white windows; all identical. 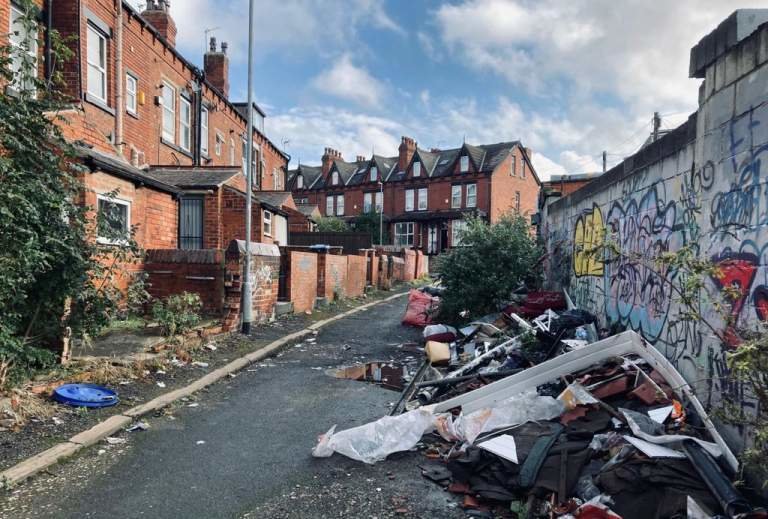 Twenty-five years ago, Hyde Park was a seemingly ordinary place, yet it was still on the brink. According to Dark Heart: The Shocking Truth about Hidden Britain by investigative journalist Nick Davies, behind the faded doors, it would take very little to knock occupants into deprivation. A sickness, a car crash, a burglary, a divorce, a bill more expensive than usual. An epidemic, say.

At the end of Hyde Park Road, the church is now a mosque, but the post office and barber shop remain. Across the street, HP has a new owner, and a new name, but it is still selling customised furniture. It is more a storehouse than a showroom, in fact; jam-packed with tables, beds and chest of drawers.

Paul Beerth, a painter, is with two co-workers in a small back room with no windows. Despite being on dialysis, he stayed home only at the beginning of the first lockdown on on 23 March for three weeks.

He says he has received no support from the Government and so “honestly, I don’t care if I break the rules”. Paul says he is “careful”, but has little choice. “The state, here, is gone. Here, you are on your own. And you live day-by-day. So, I decide myself what is best. A virus, here, is a luxury that no one can afford. You really think the Government has any clue what our life looks like?”

No Such Thing as Society

Hyde Park is quiet. If not for the smoke emerging from the chimney and the water dripping from a cracked pipe, there is little sign of life around. Retailers have shut down, a goal is drawn with chalk on a wall for a football pitch. The Newlands pub, which used to be the neighbourhood hangout, is now a flat. Residents barely know who lives next door.

Outwardly, it looks tidy, with identical two-storey houses, all in a row, like uniformed soldiers. But as you get closer, the entrance is a rusty gate off of its hinges, followed by rickety steps and a tiny garden with unpaired, unsteady chairs. Instead of curtains, windows are shaded with cardboard. Nearby, a car is parked with an Uber plate.

Margaret Thatcher’s famous 1987 statement that there “is no such thing as society” is a reality. 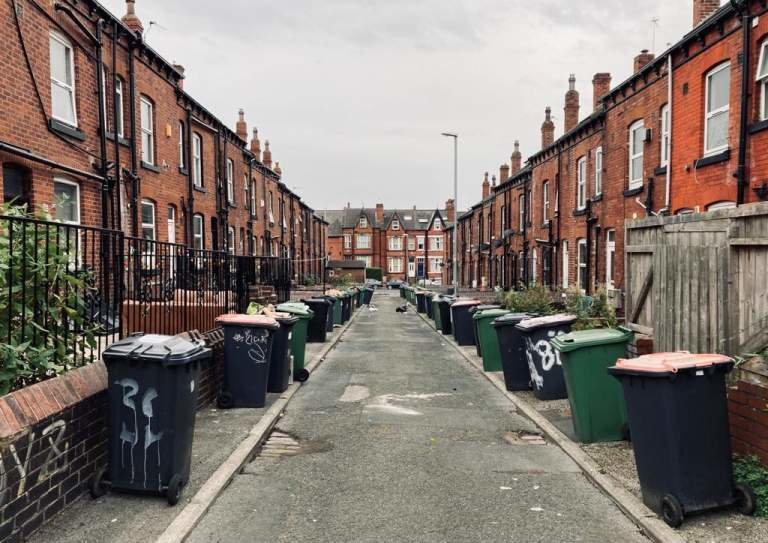 Rainbow Junktion is not a traditional foodbank, but a café with no prices. All the food served is leftover and comes from grocery stores, with people paying whatever they can. The man behind it is Reverend Heston, of the All Hallows Church. He wanted Hyde Park to have a meeting place once again, to be a community. Slowly, it became a type of foodbank too. In March, it jumped from providing 150 to 400 meals a day. “Some days, the queue went all the way to the mosque,” he says.

The first to show up is Lucy. She’s wearing a ski hoodie under a dinner jacket and sandals. In her hand, like a gem, she clutches a penny. For the collection box, she says. Aside from that, she has nothing and no one – like those who come next. People with problematic drug and alcohol use, those who are homeless. In an hour, others – those who do not wish to be seen – come in: victims of COVID-19. A man in charge of a failed bar, a taxi driver, two students, a physiotherapist. Some say that they are “here for a friend”.

Before the pandemic hit, the Government advocated the solution as creating jobs. But in-work poverty in Britain has risen to 18% in the past 25 years.

“My contract was scaled down to a four-hour work day,” Linda, a 52-year-old electrician, says. “We are a family of three, and my salary is our only income. I have been working since I was 16 and I have always had second-hand clothes, second-hand furniture, second-hand appliances. Things found here and there. All my life, I could never afford anything else. And now, I am about to lose even this.”

She says she has received little from the state and was even asked to return £500 of overpaid tax credits. She went to the Welfare Rights Unit, which advised her to move her daughter, a brilliant student enrolled in one of the best schools in town, to a school closer to home to save on transportation costs.

Chris, 34, looks like a boyband frontman. He is a chef of upscale restaurants, but stopped working in March, as did his partner. They have three children. “In times past, you could hold out for a while,” he says. “You could turn to your friends, or your relatives. But today, we are all in the red. It’s all cut to the bone.”

In the first three months of lockdown, more than 650,000 workers were made redundant and many others were furloughed, paid 80% of their wages – the statutory minimum of just £8.72 per hour for many people. The total this could amount to is £18,138 a year. The 80% has been further reduced to just 67%. 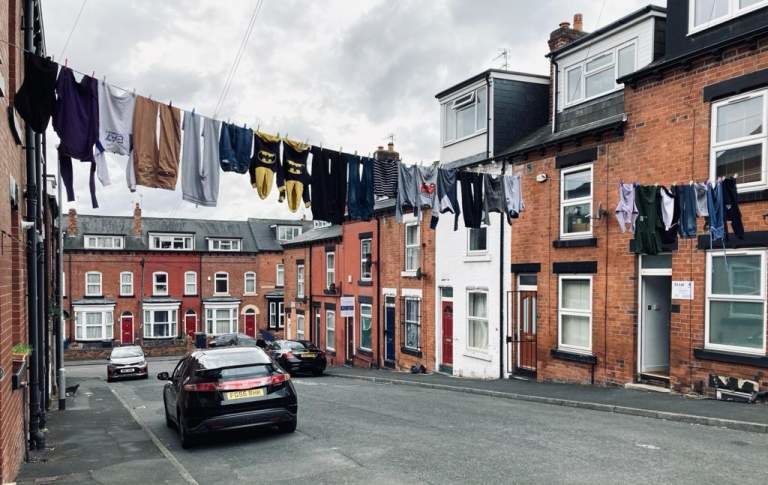 “The problem is not COVID-19,” Chris says. “If a country goes hungry within a month, the problem is the country.”

Shabana is 42 years old, a single parent, who says she keeps afloat only because her daughter, like 1.4 million other children, receive free school meals. There have been 900,000 new applications for the scheme in recent months – as well as a controversial rejection to extend it to cover the Christmas holidays in England by Boris Johnson’s administration.

“When I was little, we sent Christmas gift baskets to Africans,” Shabana says. “And now, we are the Africans. I would have never imagined such a life. In Hyde Park we never had much to live on. But it’s not a matter of a lot or not, we had rights. Now, you have only charity.”

Her mask is a scarf because a mask is too expensive.

Aside from Rainbow Junktion, there is little support in Hyde Park. Outside of its opening hours, restless souls roam nearby. A kid with a skateboard knocks on the door. No one answers. He knocks again. He waits for over an hour. When I take a Twix out my pocket, he gets closer, and looks at me. He moves away. He knocks, again. Then he comes back, shyly. “I’m hungry,” he says.

His brother is on the corner. They split the Twix. I watch them walking away, side by side, padding off into the darkness. Two small boys without 50p between them to buy a chocolate bar in a British city in 2020.