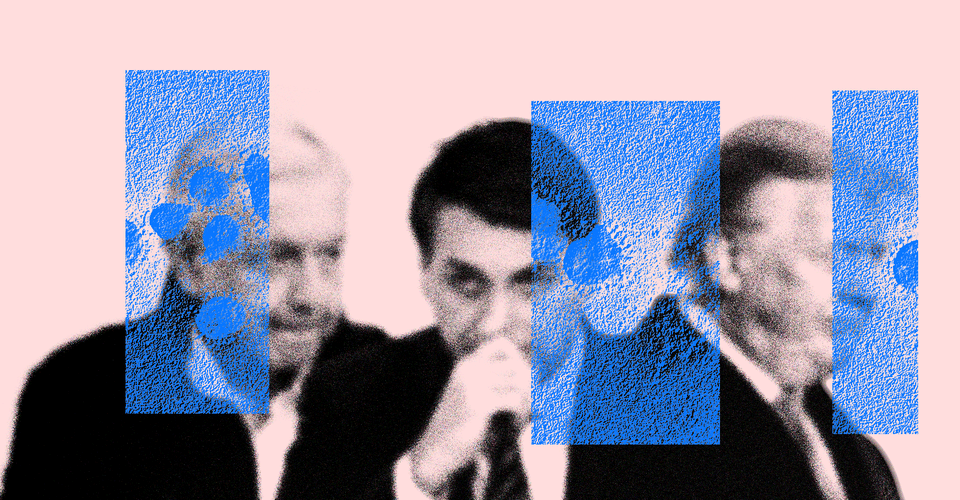 The Populists Who Got COVID-19 Are a Warning for Democracy

They downplayed the severity of the coronavirus and never changed their minds. What now?

When Donald Trump was sick with COVID-19 last year, some Americans wondered if his illness would spur a change in his handling of the pandemic. It didn’t—Trump continued to minimize its risk, hold rallies, and resist mask wearing. He declared that the United States was “rounding the corner” and little significant policy change materialized, even as cases of COVID-19 increased and deaths mounted.

It’s not a uniquely American fable. The same scenario has played out in countries such as Brazil and Mexico, led by nationalists who also tested positive for the coronavirus but chose to double down on their failed strategies after recovering. Brazil’s Jair Bolsonaro called COVID-19 a “small flu” and urged his people to defy local restrictions before he got sick—then continued to share that message after recovering, having received the country’s best medical care. Andrés Manuel López Obrador, Mexico’s leader, told his compatriots to “live life as usual” while his government dragged its feet on implementing restrictions and ramping up virus testing. AMLO, as he is known, was also diagnosed with COVID-19, but having since recovered, he continues to not wear a mask and says the pandemic is abating, while his country fumbles vaccine distribution.

Instead of learning from their illness, understanding the role of science and public health, and making proactive policy decisions, these leaders chose denial and deflection. They offer a lesson of the pandemic: If getting sick won’t change these leaders’ minds, perhaps nothing will.

In Mexico, this dynamic is unfolding in near real time: López Obrador returned to work last week after spending nearly two weeks in quarantine recovering from a mild case of the virus. Like Trump and Bolsonaro before him, López Obrador avoided talking about the pandemic while the virus took root. He urged people to hug and kiss each other, saying he was entrusting himself to his good-luck charms of scapulars and $2 bills. In addition to not wearing a mask, he has traveled frequently and mocked social-distancing recommendations. His government didn’t enact a mask mandate, failed to pass economic-relief measures to bolster its stay-at-home recommendations, and has not tested widely for the virus.

COVID-19 is raging out of control in the country. Throughout January, hospitals in Mexico City, the capital, were at capacity; oxygen shortages meant that sick residents were suffocating; and the vaccine rollout stalled. Mexico currently has the world’s third-highest death count—troubling because of its relatively small population, and the fact that even this toll is likely an undercount, according to many experts. Then, as the country’s deadliest month of the pandemic so far came to an end, López Obrador himself fell ill.

But not much has changed since. While in quarantine, López Obrador appeared maskless in videos broadcast from the capital’s National Palace, saying he was recovering from mild symptoms, feeling better, and working from home. He returned to his daily morning press briefings last week, where he sparred with reporters asking if he should wear a mask, and declared that the pandemic was subsiding.

“The first thing he did was say that it was not necessary to wear a mask,” Laurie Ann Ximénez-Fyvie, a medical expert at the National Autonomous University of Mexico, told me. “In Mexico, we are at a very critical point. We have these variants that are circulating in our communities. People are tired of having gone on with this for so many months, and things ... just don’t get better. And at this point, he decides to double down on ‘We don’t need to wear masks.’ I think it’s just the most irresponsible thing I’ve ever heard.”

But that strategy—of downplaying the risks of COVID-19 after recovering from the virus—worked for Bolsonaro and, to a lesser degree, Trump. After getting sick last summer, the Brazilian president minimized his illness, hawked hydroxychloroquine as an antidote, and ridiculed mask wearing. He fought with governors who imposed regional lockdowns and urged Brazilians to continue working. That framing positioned Bolsonaro as the guardian of the nation’s economy, battling experts and bureaucrats who wanted to shut down the country, according to Oliver Stuenkel, a political scientist at the Fundação Getúlio Vargas university, in São Paulo. Only after Bolsonaro’s popularity started to slip did he push a relief scheme to issue cash payments to the country’s poorest. The end result? He emerged stronger and more emboldened than before testing positive—and most Brazilians don’t blame him for the crisis.

“That’s exactly what he wanted. It’s not like people say he responded in a great way, but all he needed was for people to say, ‘That’s just the way it is’ and ‘Some will die, but at least we won’t lose our jobs,’” Stuenkel told me.

Trump, meanwhile, dug his heels in every step of the way when it came to the American response to COVID-19, minimizing the threat and mocking the fearful. He tested positive after returning from one of his many campaign rallies (which themselves flew in the face of his own government’s recommendations), and went for a joyride after being admitted to Walter Reed National Military Medical Center, near Washington, D.C. His show of strength at the White House after returning from the hospital—marching up to a balcony facing the South Lawn and ripping off a medical mask—and his message to Americans not to let the virus “dominate you” were his declaration to the world that he was not a changed man, fitting neatly in this trajectory of how coronavirus-infected strongmen react.

Both Stuenkel and Ximénez-Fyvie told me that in their countries, there had been hope that illness would humble their leaders, encouraging them to show more empathy and exhibit a deeper understanding of the coronavirus threat.

That great humbling never happened. Part of this likely comes down to self-belief: These leaders, like most who ascend to the highest position in their country, are certain in their course of action and trust their instincts, which is how they have succeeded thus far.

There is, however, a narrower political calculus. Bolsonaro is up for reelection next year, and his handling of the pandemic may well be a major issue in the campaign. But because of how divided domestic politics in Brazil are, he faces no serious opposition at the moment and has managed to consolidate alliances with right-wing parties in the country’s congress. The most likely scenario, Stuenkel told me, is that Bolsonaro will be reelected with a plurality of the vote yet again.

In Mexico, presidents are constitutionally barred from seeking reelection, and López Obrador’s term won’t expire for another four years. His party’s control of congress will be up for grabs in midterm elections this year, though because the pandemic hasn’t dealt a blow to López Obrador’s popularity, his alliance is a favorite to win the most seats and expand its control of governorships. “There’s something very, very dangerous happening in Mexico,” Ximénez-Fyvie said. “People adore him. It’s like a portion of Mexicans had been taken into a cult.”

For Trump, too, the political reasoning to not admit error had a certain logic: His handling of the pandemic was on the ballot and he was facing a united, organized Democratic Party. A sudden about-face would have offered ammunition for his critics and perhaps weakened his base of support. In the end, he lost his bid for reelection in November, but nevertheless came within 43,000 votes of winning—hardly a resounding defeat.

Together, these leaders’ paths—from infection to empowerment—point to the durability of their brand of politics. That even a brush with COVID-19, albeit one in which they had access to better medical care than most, was not enough to force a change in tactics indicates that little will cause them to shift their stance on the coronavirus. In fact, if the cases of Trump, Bolsonaro, and López Obrador are any evidence, it may lead to a greater emboldening.
#donald trump  #covid 19  #vaccine  #covid  #coronavirus
Add Comment