In the pantheon of UK premiers, Johnson must claim his place as among the most scandalous, say experts

You have to go back a century, to the radical “Welsh Wizard” David Lloyd George, to find a British prime minister judged as controversial and as indifferent to the rules as Boris Johnson, political historians agree.

The Liberal leader was a “very scandalous figure, who did have the qualities needed to see the first world war through to a successful conclusion, but he split the Liberal party, and he had a slush fund paid for by the sale of peerages”, said Andrew Gimson, author of Gimson’s Prime Ministers.

Eventually, he had the rug pulled from under him in 1922. “Stanley Baldwin said of Lloyd George, ‘He had a morally disintegrating effect on all whom he had to deal with’,” said Gimson. “I know, many people take the same view of Mr Johnson. And, of course, Lloyd George thought he could come back – but he never did – and stayed in the House of Commons for years after.”

It is the lot of all prime ministers to be the brunt of jibes and criticisms since 1721, when Whig Sir Robert Walpole took up office to the despair of writers such as Jonathan Swift, Alexander Pope, John Gay and Henry Fielding, “who thought he was on the take”, said Gimson, whose new biography of Johnson is published this month.

Walpole built a palatial Norfolk mansion, and installed wonderful pictures, now in the Hermitage, St Petersburg. “Rather more serious stuff than Lulu Lytle wallpaper, I would say. Though, to some people, the wallpaper and those awful fittings might be the most disgusting example of prime ministerial greed ever,” added Gimson.

Johnson detractors may have accused him of misleading – or, as the former Speaker John Bercow put it, of having “an insouciant and flippant disregard for the accuracy of what he says to the House of Commons” – but others may characterise it as “more often wishful thinking or exaggeration”, Gimson said.

He added: “I think he is part of a tradition in English public life of big figures who couldn’t really care less about rules. It’s difficult to think of anyone like him who is still alive.”

In the pantheon of UK premiers, Johnson must claim his place as among the most scandalous, according to the contemporary historian Sir Anthony Seldon, political biographer of all UK prime ministers since Thatcher, and whose biography of Johnson is due in the spring.

“His premiership was controversial and historic, because of Brexit, the landslide, and Covid, but also historically wasted opportunities. To have squandered the landslide is really unusual. He simply didn’t know how to be prime minister, hadn’t a clue,” said Seldon.

“He had more flaws than the Shard. But also extraordinary once-in-a-generation political gifts; the ability to read politics, to see a big picture, to communicate, and to be liked, far and wide,” he added.

“It’s historic, also, because of the extraordinary lack of respect for convention and the constitution.

“He thought he could make up his own rules, but in the end he found out that he couldn’t. He ran out of oxygen. He went on and on defying gravity and in the end he fell from the sky. 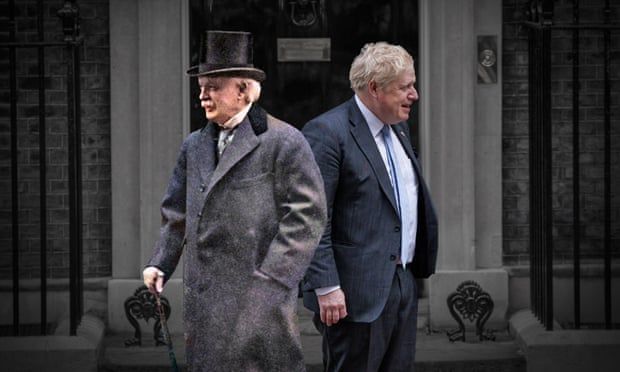 “Where will it rank? It was certainly the most unconventional premiership since Lloyd George.”

Alistair Cooke, Conservative peer and party official historian, said Johnson was at the centre of one of the greatest political controversies of all: Brexit.

He had relished it, “solely because it enabled him to advance his own interests, not because he had a vision of how Brexit would benefit his country.” And his Tory predecessors would be “aghast” at his inability to explain how such momentous upheaval would bring economic gain, he said. Unlike Thatcher, who submitted to long media interviews to justify her actions, Johnson had not given a single interview of that kind, Lord Lexden added.

“Johnson was the most frivolous leader the Conservative party had ever had. The Nero de nous jours. He would not put in the hours that running a successful government demands. He chopped and changed policies at whim. He was the first Conservative leader to show no respect for the country’s historic institutions, embarrassing the Queen by proroguing parliament illegally, and treating the Lords and Commons with disdain.

“He often acted in ways that are incompatible with Conservative values and traditions. Was he really a Conservative at all? That ultimately is why this egotistical prime minister without political convictions will always be regarded as one of the most controversial holders of the office,” he added.

Politicians in the past, such as Lloyd George, who had a long affair with his secretary, were protected by a “kind of omertà” in the media and high politics that prevented such matters becoming public, said Steven Fielding, professor of political history at Nottingham University. Johnson, he said, was a victim of more open post-Profumo scrutiny.

But, personal life aside, “the alacrity with which [Johnson] broke rules and conventions and norms that have defined British politics in the postwar period, that is something that is unique, I think.”

It may be Johnson’s behaviour sets a new, lower standard for politicians that becomes the norm, he said. “I would like to think historians of the future will stand back, look at his premiership, and say, ‘Oh my God. How did that happen?’ The danger is, he might now have been establishing norms and practices that future historians will think, ‘That’s alright.’ And they become the norm, become the consensus.”

No postwar prime minister had managed to get themselves into as much trouble as Johnson, according to Tim Bale, professor of politics at Queen Mary, University of London, and author of The Conservatives since 1945.

Citing Partygate and the handling of Covid as examples, Bale said: “I really do think you would have to go back almost a century to find a prime minister who has been mired in this kind of controversy, and all of his own making.”

It would also probably more than rival the controversy around Harold Wilson’s Lavender List, he said. Wilson’s resignation honours list was a controversial set of awards known as the “lavender list” due to a claim that it was drafted on lavender notepaper by the head of Wilson’s office, Marcia Williams (both Williams and Wilson denied this). It included wealthy businessmen not close to either Wilson nor the Labour party.

Bale added of Johnson: “I think his willingness to mislead people, both his colleagues and in parliament and the media on countless occasions, really does mark him out from most of his predecessors.

“He’s taken almost everything to another level really. We haven’t seen another prime minister since Lloyd George who has been as capable of doing that as he has.”