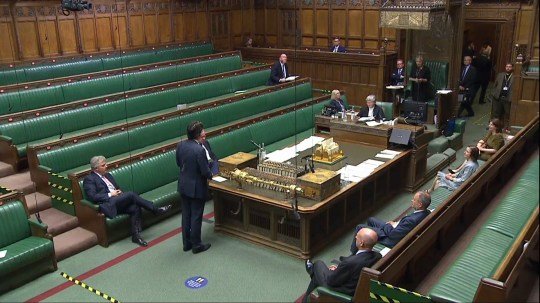 We cannot allow the prime minister and his adviser’s insatiable lust for power to threaten our fundamental human rights and the rule of law.

This week I presented a Bill in the House of Commons designed to take back our democracy.

The Remote Participation in House of Commons Bill seeks to reinstate online involvement in debates and voting for self-isolating MPs.

It was first tabled by my Right Honourable Friend, Geraint Davies MP, however I was proud to present it on his behalf as, ironically, he was self-isolating so could not attend the chamber and the Government removed his right to speak in debates from home.

We all know how much pain and disruption Covid-19 has brought to our lives and MPs are no different. We had full remote participation back in April and May, which meant MPs from all across the UK took part in debates using video conference technology. It is the 21st Century – we are all now getting used to Zoom, Teams or one of the other online conferencing tools.

But sadly, isolating MPs had their right to speak remotely in the House of Commons removed by the Government in June when The Leader of the House, Jacob Rees-Mogg, abolished remote democracy in the guise of getting MPs back to work. This move was unacceptable and completely unnecessary.

The Government knew this was an anti-democratic decision done in an undemocratic manner. This vote itself wasn’t conducted online, so shielding MPs were excluded.

Even worse, the Government abused the purpose of ‘parliamentary privilege’. This is meant to protect the rights of MPs to represent voters in Parliament free from the threat of court action but the Government used it for its own protection: it said that the Leader of the House can make any rules they want, which prevented the courts intervening and potentially rule that removing the rights of voters’ to be represented as illegal.

I do not believe this is right, or democratic. And how does this reflect on our parliamentary sovereignty, which many claim to hold so dear? Constituents vote for their MPs to represent them and the area in which they live – no one has given this right away or given permission to the prime minister to make all the decisions himself. We do not live in a dictatorship.

At such an important time all our constituencies simply must have a voice in these debates. If MPs can attend Parliament and participate in person (in a socially distanced way) then that is ideal. But if they have to self-isolate because they or someone they live with has Covid-19 then it is totally unacceptable that the constituency is not represented. Why should some MPs get to speak and others silenced?

The taxpayer has already invested heavily in the technology for remote democracy by funding a remote voting app – and we know it is effective. It’s working in the Welsh Parliament, Scottish Parliament, and is even being used in the House of Lords, yet millions of British voters are still left voiceless.

This is despite the fact decisions made now in the Commons not only shape our lives but the lives of future generations. This has never been truer than now, in a global pandemic.

Our country needs our democracy to be fully functioning in order to make the best decisions, especially as we are seemingly facing a resurgence of the coronavirus, which has already sadly claimed over 40,000 lives.

We are also soon on the brink of an abrupt end to the furlough scheme, that has the potential to throw millions of people into unemployment and poverty. Meanwhile this Government continues to risk a no deal Brexit, which the House of Commons previously agreed was a bad idea.

The experiences of voters around the country differ – furloughed staff, people in lockdown, key workers and the self-employed all have stories that need to be highlighted through their MP in Parliament, otherwise we are just left with the PM parroting that there is no problem.

At the moment MPs can apply for a proxy vote but this has to be done in advance. Otherwise they can be ‘paired’ with another MP from an opposing party, which cancels out each other’s votes and means neither will have a vote recorded.

This bill that I presented resumes the equal right of all constituents to be represented, by establishing a mechanism for those MPs unable to attend to participate remotely.

It would have allowed the self-isolating Leader of the Opposition, Keir Starmer, to remotely oppose the Internal Market Bill this week which threatens to break international law.

Jacob Rees-Mogg was also unable to do his job and answer Business Questions because he himself was self-isolating. My bill would have meant both could have worked from home.

This Bill is also needed for reasons of health. Indoor queues are not Covid-safe so even if MPs attend in person they should not be standing in line to vote, or crowding into packed and unventilated lobbies. MPs will simply be put at higher risk of catching Covid-19 – one MP even fainted recently due to standing in the long queue.

And let’s not forget MPs will be travelling back to their constituencies all over the country, possibly risking being ‘superspreaders’ of Covid-19.

The Government’s abolition of remote participation is particularly scary as it is part of a pattern – one that threatens our fundamental British values. It is like they are slowly chipping away at our democracy and hoping no one will notice or call them out on it.

It includes their proroguing of Parliament – deemed unlawful by the Supreme Court last year; the brutal hounding out of the heads of our Civil Service; the attacks on the public broadcaster the BBC; giving ministers ‘Henry VIII’ powers to make laws without the consent of Parliament and the recent attempt to break international law.

At home, the Government is creating a divided kingdom. Abroad, it is destroying trust in Britain and our reputation on the international stage.

We cannot allow the prime minister and his adviser’s insatiable lust for power to threaten our fundamental human rights and the rule of law.

The solution is easy. The remote voting app, developed by the Speaker and House of Commons Commission, is something this House and the country should be proud of, celebrate and utilise.

I am determined to make Parliament better to modernise it. Remote participation and voting will re-establish full democracy in our House of Commons – for all our voters, all our nations and all our futures.
Add Comment