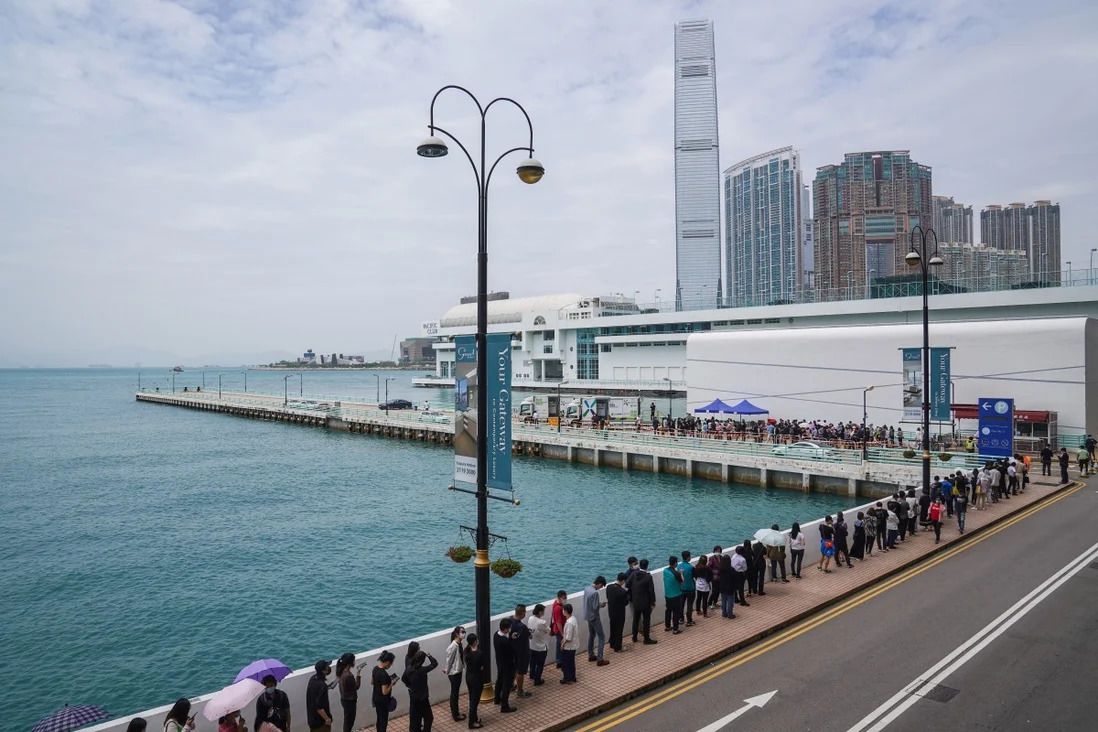 The patient, a 29-year-old man confirmed to have the more virulent N501Y coronavirus strain on Saturday, is said to have visited a dessert shop at the Hong Kong mall.

Hundreds of people queued up on Monday at Tsim Sha Tsui’s Harbour City, Hong Kong’s largest shopping centre, to be compulsorily tested for Covid-19
after a patient carrying a mutated strain of the virus visited the mall about a week ago.

Health authorities issued the testing order for visitors to the 2 million sq ft mall for anyone who was there on April 11.

The Centre for Health Protection (CHP) told the Post that a 29-year-old patient had been to Harbour City a week ago. He previously worked in Dubai, and returned to the city last month, but completed 21 days of hotel quarantine without testing positive.

Earlier on Monday, a source said the mall management mistakenly believed the visitor was a 31-year-old friend of the man, who has also been confirmed to be carrying the mutant strain.

According to the management, the man visited shop No 3001, known as Le Dessert, in the City’super market on the third floor of Gateway Arcade, part of the Harbour City complex, on the day in question.

A source familiar with Harbour City management clarified that Le Dessert was a takeaway counter and not a restaurant, but visitors to the mall’s roughly 50 eateries were notified by the government’s risk-exposure “Leave Home Safe” app that they should arrange for Covid-19 testing and promptly seek medical advice if they felt unwell.

“There was some confusion as to exactly who and where the patient went to in the mall, since the government notice on the compulsory test was put up near midnight last night,” the insider said. “People, including restaurant operators, were asking whether the infected person visited a particular restaurant on April 11.”

The government has set up a mobile testing facility at Harbour City’s Pier 3 car park operating between 10am and 8pm, with customers and all full and part-time staff required to get tested by Tuesday, according to an official statement issued late Sunday night.

Respiratory medicine specialist Dr Leung Chi-chiu said the compulsory testing order was “utterly necessary” at the popular shopping centre to prevent the mutant strain from spreading into the community.

“Since the strain tends to spread faster, it’s better to take preventive measures and test as many people as possible at places where cases with the variant strain had been to,” Cheung said. “We don’t know how bad the situation will be if it spreads, so it’s important to act fast now rather than wait for cases to explode again.”

Hong Kong recorded 12 coronavirus cases on Monday, all but one of which were imported. That took the city’s total infection tally to 11,695, with 209 related deaths.

On Monday morning, queues were snaking around the outdoor car park, with at least 150 people in line as of 12.30pm.

One of those waiting in line, Andy Ho, 55, had come to get tested after receiving a notification from his risk-exposure app.

“I came and ate at a restaurant here in the morning of April 11,” he said. “I’m not too worried because there weren’t a lot of people when I was around, and I came alone.” 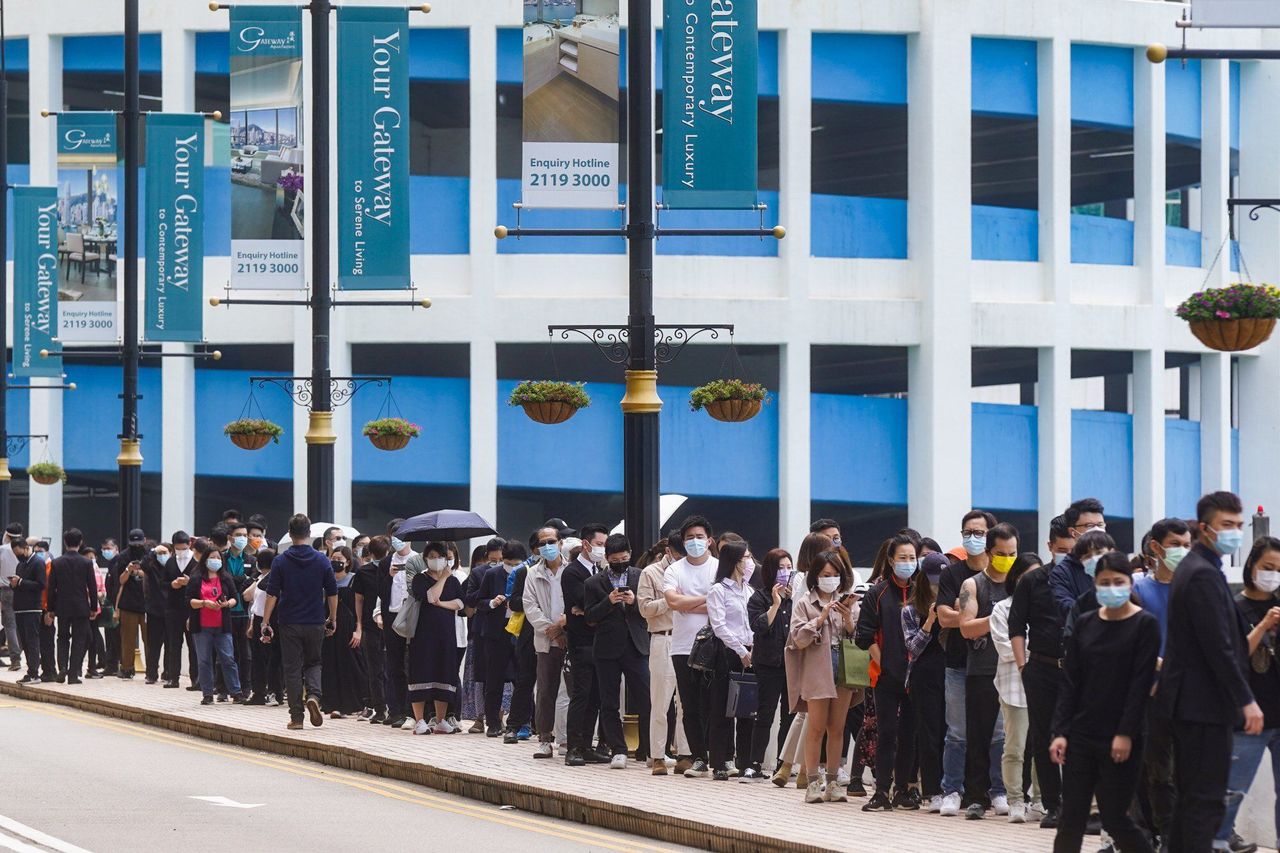 Ben Tung, who works in an office building at Harbour City, said the company he worked for had required all staff to get tested.

“My company asked everyone who came to the office on April 11 to get tested today; if we don’t, we’re not allowed to go back to work,” he said.

“I’m not worried, because that confirmed case didn’t take off their mask or eat here, so it should be OK, and I also always have my mask on.”

Fears that the more infectious strain of the coronavirus could be circulating in the city first emerged after the CHP confirmed on Saturday that the 29-year-old man was found to be infected with the N501Y mutation.

A 31-year-old woman who was a friend of the man, and who lived on Parkes Street in Jordan where he was said to have stayed, was also confirmed to be carrying the mutant strain on Sunday, despite not having travelled recently.

Health authorities confirmed on Monday that the woman was a staff member of Optimal Family Health at The Centrium on 60 Wyndham Street in Central. A mandatory testing order was issued to people who worked there or visited the office building, while her close contacts were sent to quarantine.

Harbour City’s management said the Le Dessert outlet had undergone deep disinfection, as had all public areas inside the mall. The business’ takeaway counter was closed on Monday.

Grégoire Bessette, 32, who works in an office tower at the mall, was one of the few people seen at the City’super food court during lunch time on Monday.

“I come here for lunch almost every day,” he said. “I’m fully vaccinated, so it should be fine for me.”

Harbour City is a major draw, attracting at least 100,000 people to its 700 shops, 50 restaurants, and two cinemas every day, though foot traffic appeared visibly reduced on Monday.

Leung, the health expert, called on people to avoid social gatherings and crowded places in a bid to minimise the risk of silent transmission of Covid-19.

“The next two weeks are crucial for the city to prevent a big spike in cases. People should get tested if they feel unwell or have visited the same places as confirmed cases,” he said. “At the same time, eligible persons should get vaccinated. We’re still a long way away from reaching herd immunity.”

Harbour City went ahead and launched a sales promotion event to attract customers on Monday. The mall’s last set of offers expired on Sunday, and it renewed a programme which allows visitors to redeem HK$200 (US$25) worth of coupons upon a single spending of HK$500. Other offers include up to six hours of free parking when shoppers spend HK$300 using electronic payments.

The mall was the city’s third to be issued with a compulsory testing order, after MCP Central in Tseung Kwan O and K11 Musea in Tsim Sha Tsui, following positive cases at those establishments in recent months. Harbour City is the flagship property of listed firm Wharf Real Estate Investment Co.