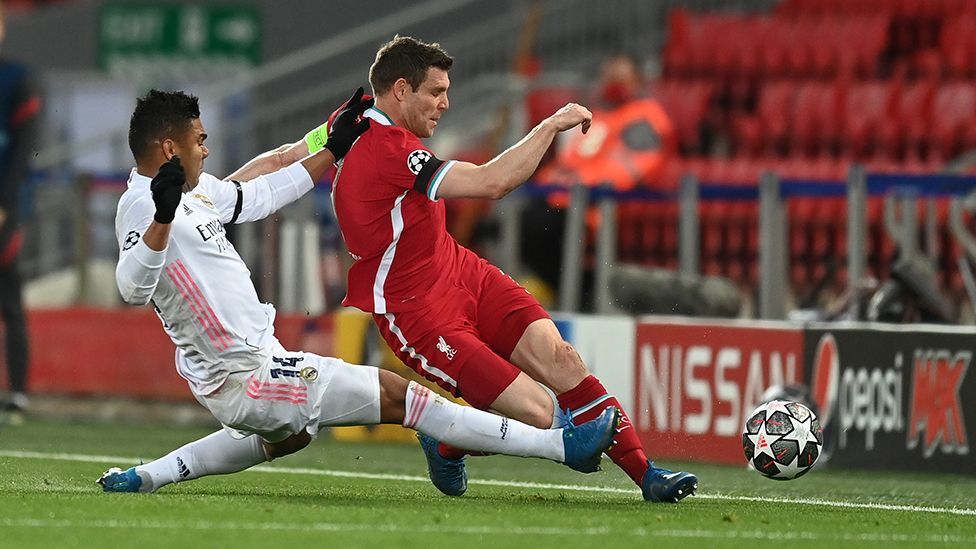 A plan by some of the world's biggest football clubs to start a new European Super League (ESL), has provoked strong opposition.

The clubs involved say the ESL will benefit football as a whole, but critics say it's driven by greed.

Which teams want the Super League?

Twelve clubs have signed up - six of them from the English Premier League.

The clubs want a new midweek competition and to continue competing in national leagues.

The ESL would have 20 teams. Of these, the 12 founding members - plus three yet to join - would be permanent and never face relegation.

Five other sides would qualify each year.

The new league would rival the current Champions League competition, one of the biggest club tournaments in football. 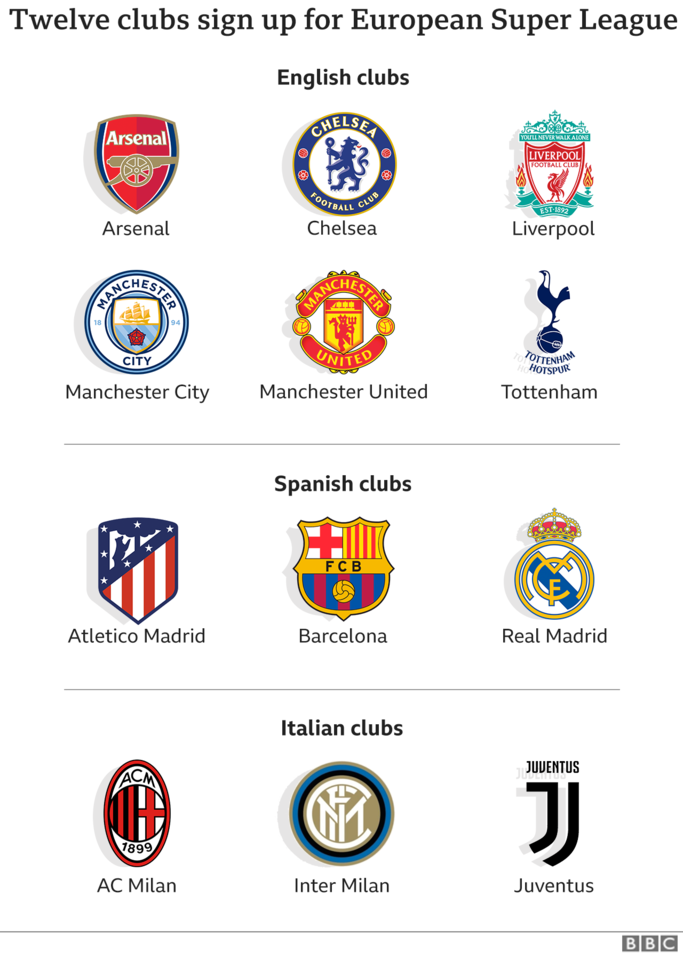 Why is the plan widely opposed?

The move has been condemned by fans, pundits and by most football bodies not involved.

With 15 teams in the ESL not facing qualification or relegation, critics say it will create a closed shop at the top of football.

The Premier League says it "attacks the principles of open competition and sporting merit".

Culture Secretary Oliver Dowden said the plans threatened the pyramid structure of English football, "where funds from the globally successful Premier League flow down the leagues and into local communities".

There's also the fear that the ESL would draw huge global TV audiences away from existing leagues such as England's Premier League and Italy's Serie A.

Why do the teams want a Super League?

Money seems to be the driving force. 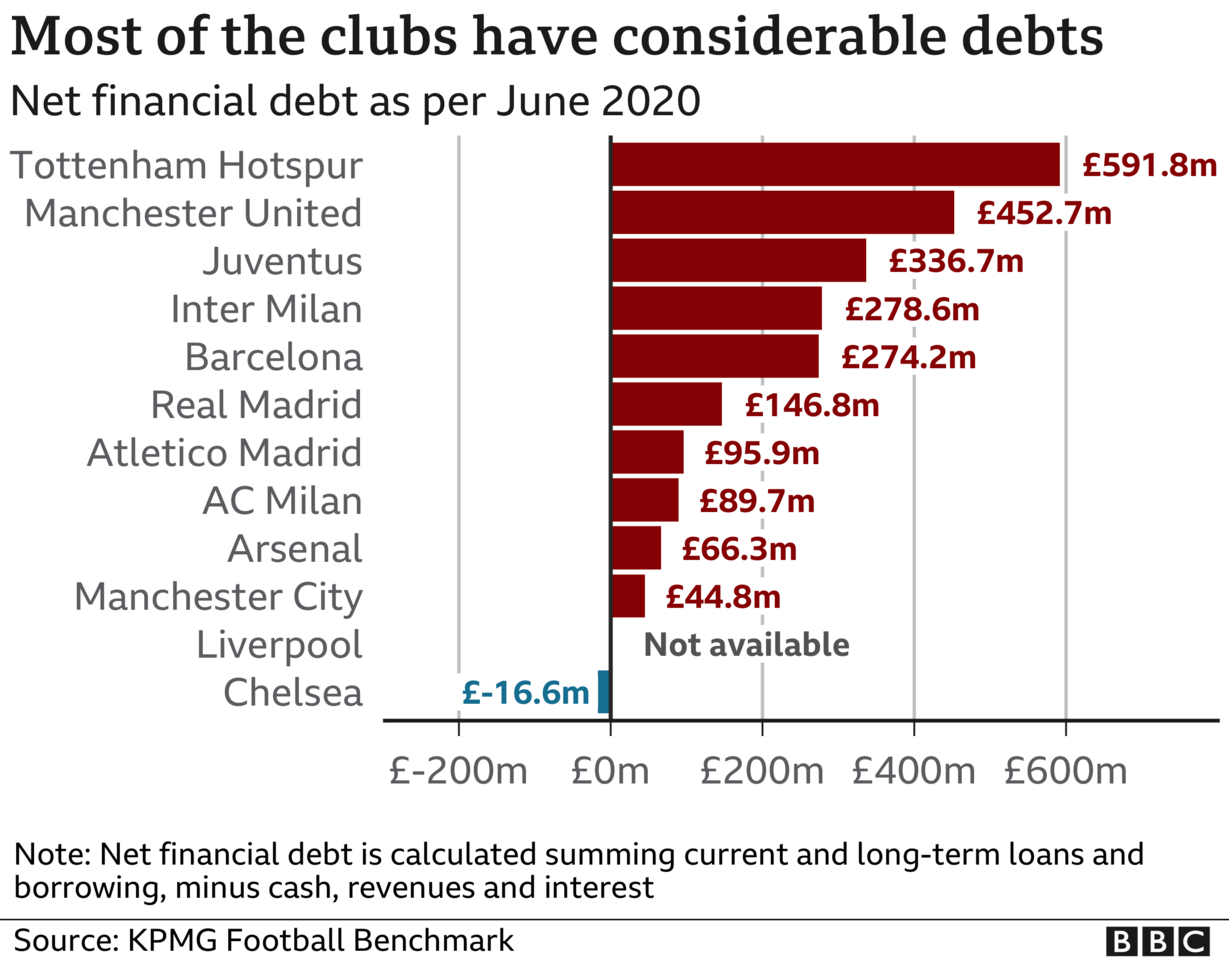 Football club revenues have been hit hard by the Covid pandemic, with disrupted fixtures and a lack of spectators.

Big clubs have superstar players with multi-million pound salaries to be paid.

The founding clubs are being enticed with a share of a €3.5bn (£3bn) grant provided by the investment bank JP Morgan.

How would the Super League work?

Under the proposals, the ESL would start in August each year, with plans to launch "as soon as practicable".

The 20-team league would be split into two groups of 10, playing each other home and away.

The top three in each group would qualify for the quarter-finals, with the teams in fourth and fifth playing a two-legged play-off for the two remaining spots.

From then on, it would have the same two-leg knockout format used in the Champions League, with a final in May at a neutral venue.

What's being done to stop the ESL? 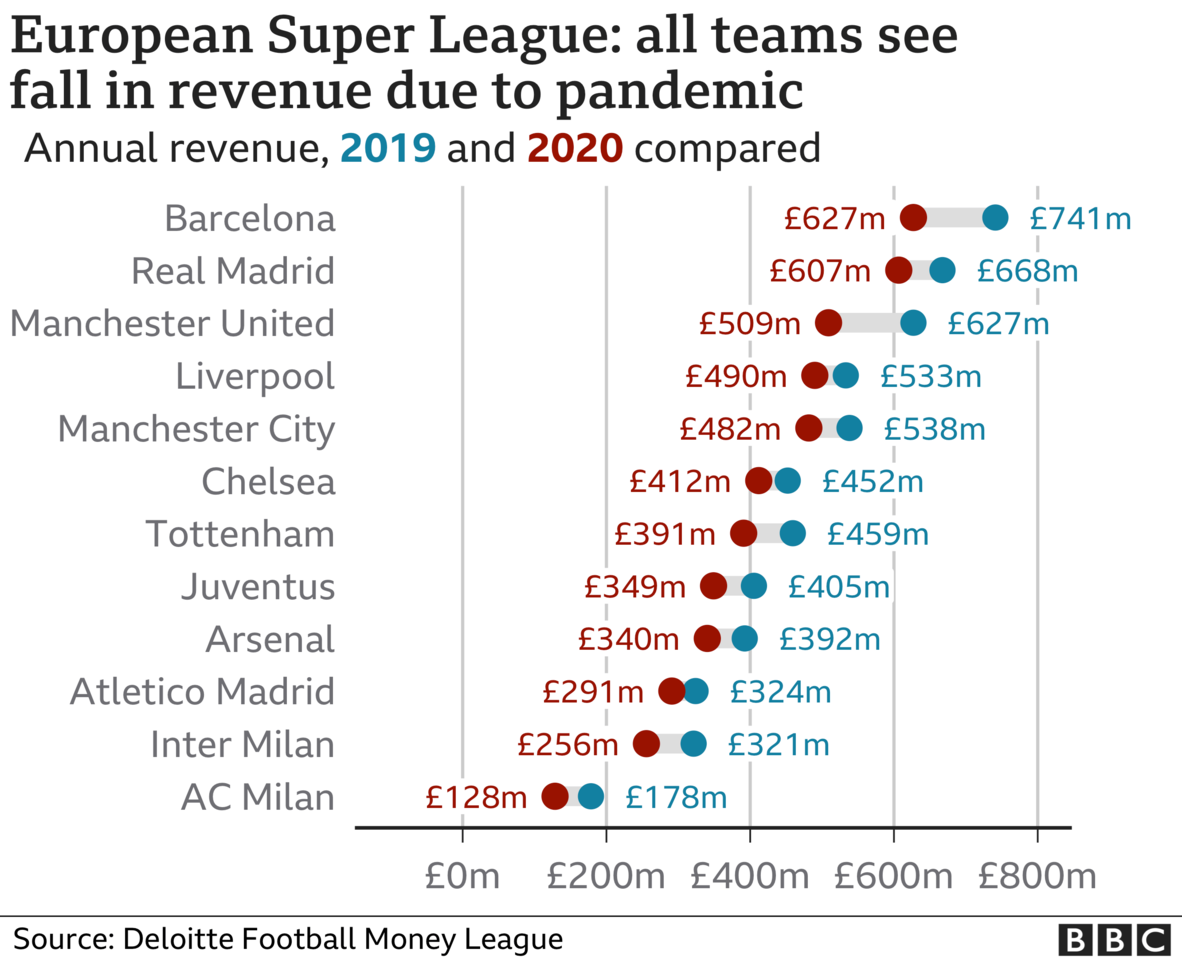 Uefa, Europe's football governing body, had hoped plans for a new 36-team Champions League would head off the formation of a Super League.

Sports bodies say they will "remain united" in trying to stop the breakaway league, using legal and sporting measures if required.

Uefa's president has warned that the clubs would be banned from all other competitions at domestic and international level.

He said that players would also be prevented from representing their national teams at the World Cup.

Prime Minister Boris Johnson has said the government is "going to look at everything that we can do with the football authorities to make sure that this doesn't go ahead in the way that it's currently being proposed".

Asked if the government could claw back coronavirus loans to the clubs, a Downing Street spokesman said it was looking at all options.

No 10 has also refused to rule out introducing legislation.

Much could depend on which other teams sign up.

Bayern Munich, Borussia Dortmund and Paris St Germain - the biggest clubs in Germany and France - have not thrown their lot in with the breakaway league.

The world governing body, Fifa, previously said it would not recognise a breakaway European league.

Fifa has expressed its "disapproval" and called on "all parties involved in heated discussions to engage in calm, constructive and balanced dialogue for the good of the game".

Meanwhile, the ESL is trying to block any sanctions Uefa or Fifa may try to enforce over the formation of the league.