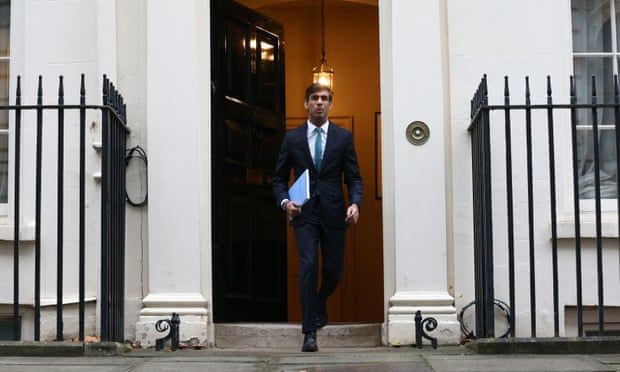 Rishi Sunak’s frustration with Kwasi Kwarteng may only have burst into the open on Sunday because of an ill-tempered outburst from a Treasury insider, but the row over support for businesses hit by the energy crisis laid bare deeper tensions at the top of government.

Sunak spent much of the pandemic playing up to his role as the people’s chancellor, as the state stepped in to pay the wages of millions of people through the successful but extraordinarily costly furlough scheme.

With the economy bouncing back more quickly than expected from the Covid slump, however, Sunak is keen to return to the Treasury orthodoxy of fixing the public finances and letting the private sector shift for itself.

He would also dearly like to be able to cut taxes in the run-up to the next general election – both to tempt voters to stick with the Tories; but also to play to Conservative members mulling the best candidate to succeed Boris Johnson as prime minister.
Sunak was dragged by Johnson and Sajid Javid into announcing the national insurance increase to fund the NHS and social care at a time when allies said he would prefer not to be raising taxes at all, but appears to have drawn a line in the sand when it comes to other spending.

The Treasury steamrollered through the £20 a week universal credit cut in the face of widespread warnings that it would drive families into poverty, and insisted on cutting the aid budget despite opposition from many senior Tories who warned that it would cost lives.

Whitehall insiders suggest Sunak is equally keen to cleave to Treasury orthodoxy when it comes to intervention in the private sector. He signed off on the bailout for CF Fertilisers last month, justifying it as a short-term solution to an evident market failure. But the Treasury has long been sceptical about being drawn into pouring taxpayers’ money into potentially open-ended bailouts for struggling companies.

With sky-high energy prices expected to last for months, Sunak is likely to be highly reluctant to put public money on the table. It is hardly surprising, then, that he has become increasingly irked with Kwarteng, who appears to have been signalling to desperate business groups that he would love to help them but is hamstrung by the parsimonious Treasury.

There is also annoyance at Kwarteng claiming credit for the government’s latest narrative to explain away the shortages plaguing supermarkets and petrol station forecourts. The prime minister repeatedly insisted at his party’s conference in Manchester last month that these were caused by a long overdue adjustment to a post-Brexit, high-wage economy.

Kwarteng has told colleagues he believes he is responsible for this idea, which he dramatises by telling the story of encountering a builder in his constituency during the 2016 referendum campaign who felt his business had been undermined by cheap migrant labour.

Sunak’s emphasis in his conference speech was somewhat different, focusing on the importance of investment in technology to boost productivity rather than the suggestion employers must immediately ratchet up wages.

Generations of Treasury officials have regarded their colleagues in the business department as having a tendency to go native, in effect becoming industry lobbyists. Which side wins out in this particular battle – Sunak or Kwarteng – depends on which of them the prime minister decides to back.

Johnson has had his own run-ins with his assertive chancellor in recent months, with the pair clashing during the summer about Covid travel rules, which Sunak urged Johnson to relax in a conveniently leaked letter. The prime minister then reportedly mused to friends about whether it was time for Sunak to be removed from his post.

Johnson tends to be considerably more relaxed about splurging public money than his chancellor. He is also very focused on retaining the “red wall seats” he won in 2019, some of which play host to energy-intensive industries such as steelworks.

With his mind focused – even in sunny Marbella – by a string of negative front pages about the risks of the energy crisis, Whitehall officials believe it is increasingly likely he will wade in on Kwarteng’s side.
#boris johnson  #johnson  #covid
Add Comment