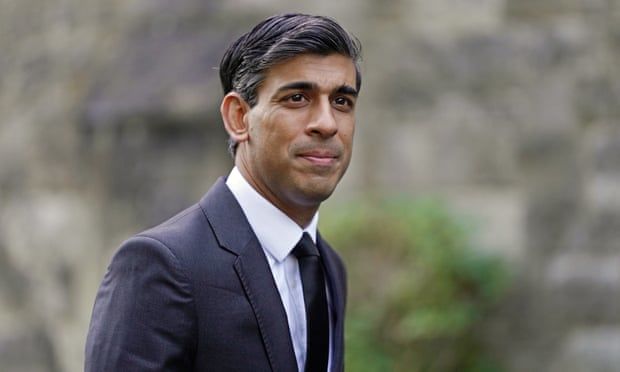 Rishi Sunak will attempt to quell growing Conservative unrest over the cost of living as delegations of MPs press him to cancel a planned tax rise and ditch VAT on energy bills in exchange for savings on tackling the pandemic.

The chancellor will convene MPs for several evening summits this week as tensions grow over pressures faced by households from April, with a planned 1.25-percentage-point rise in employee national insurance contributions (NICs) and soaring energy bills once the price cap is reviewed.

MPs’ demands are wide-ranging but the cut to VAT, which Sunak and Johnson have previously ruled out in favour of more targeted action, has “the most widespread support”, according to one veteran Tory.

“It doesn’t hurt that it’s something we can now do because of Brexit,” said another senior Tory plugged into several key parliamentary pressure groups.

Many are set to urge the chancellor to go further and delay the NICs rise from April, expected to bring in £12bn that Sunak wants to use to cut NHS waiting lists and fund the new social care system in the medium term.

David Jones, a former Brexit minister, said the pressure on many households would be immense from April. “To have this tax increase at the same time the cap is removed from energy prices is very difficult. That is a couple of thousand pounds increase for many families,” he said.

One senior backbencher, John Redwood, warned Sunak on Monday that his own ambitions depended on his standing in the party on these issues. “Those who brief that Mr Sunak should be the next PM should tell him imposing an avalanche of unpopular and unwise tax rises will undermine that ambition,” he tweeted.

Another MP said they would urge Sunak to ditch the rise and focus on making savings on pandemic spending, including NHS test and trace. “I will urge him to cut the NICs rise – £12bn is not a lot of money compared to the current Covid spend. There is a great deal of support in the parliamentary party for that.”

Though not all MPs said they would back revoking the NICs rise, one minister warned it had left Sunak exposed. “The party hates the NICs rise. Sunak himself wouldn’t have done it apart from to head off other spending demands with warnings of more tax rises. So no wonder he comes under pressure to ditch it when there’s a hook to do it. The chancellor has to realise that the party and the country are just not where he is on tax and spend.”

Johnson said he had discussed cost of living pressures with Sunak on Sunday night. “I understand how difficult it is for people, I understand the pressures that people are facing on household finances,” he said on Monday.

“It’s making life very tough. And we’ve got to make sure that people are aware of all the things that they can do, all the money that we’re putting in via local councils to help people in hardship, the cold weather payments, the warm homes discount, the money for pensioners.”

Cabinet ministers have all but rejected a windfall tax on North Sea oil and gas profits, proposed by Labour. MPs said that was less of a priority. “Most colleagues think it’s counterproductive at a time when we want to encourage inward investment,” a former minister said.

Johnson’s spokesman said a windfall tax had “not been ruled out” but hinted again that a targeted approach would be taken. “We want an approach that helps those most in need,” the spokesman said.

The communities secretary, Michael Gove, underlined that new support measures were likely to be targeted to the most vulnerable. “I think that the prudent and the responsible thing to do is to recognise that we need to take a balanced approach, and a balanced approach means that when we can support, we provide support most for those in the most difficult circumstances,” he told Sky News.

Ministers are understood to have discussed extending the warm homes discount on bills for the most vulnerable but Tory MPs argue it does not help enough households.

Treasury sources said they were reluctant to raise the tax burden on the oil and gas sector, pointing to additional taxes on the extraction rate of oil and gas and headline tax rates on profits more than double other businesses.

Labour has criticised the education secretary, Nadhim Zahawi, who told LBC that “oil and gas companies … are already struggling”, though the companies are expected to report “near record” income in 2021-22.
#johnson  #covid
Add Comment