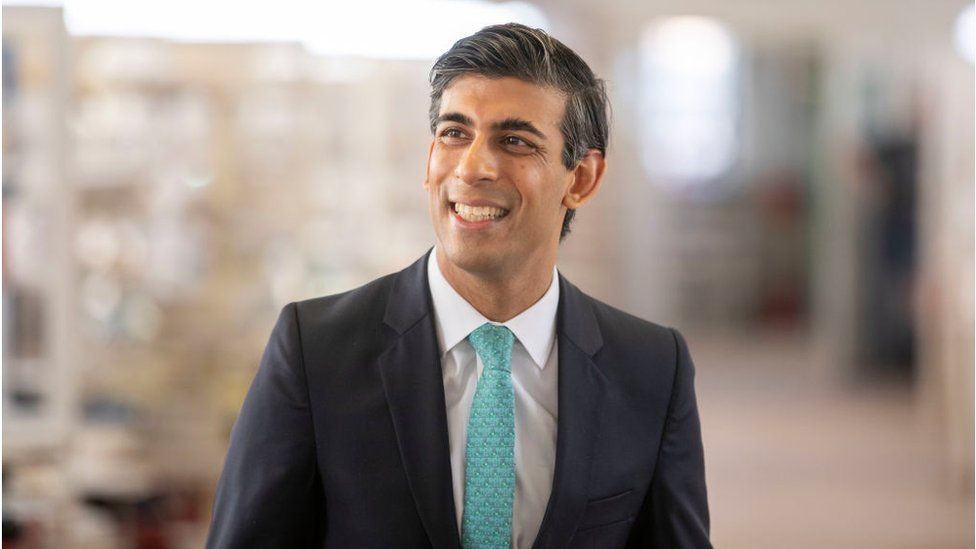 Chancellor Rishi Sunak says he is "confident" of reaching a global agreement on digital taxation ahead of a meeting of world finance leaders.

Tax on big tech companies has been a source of friction between the US and countries including the UK.

The US announced sanctions on Wednesday but then suspended them to give more time for talks.

Finance minsters will also discuss climate change at the two day meeting which starts in London on Friday.

On Wednesday the US announced it would impose tariffs on about $2bn (£1.4bn) of imports, including certain goods from the UK, in retaliation for taxes on big US tech firms.

However, it immediately suspended them to allow further talks to take place in the G20 and the Organisation for Economic Co-operation and Development (OECD).

Mr Sunak is expected to push for an agreement on this and call for all global businesses to commit to climate reporting.

The 25% tariffs the US wants to impose would apply to $887m of goods from the UK, as well as products from Austria, India, Italy, Spain, and Turkey.

The US has said that digital services taxes being imposed by the six countries, which tax tech firms on their revenues, rather than profits, are "unfair".

The US tariffs have been suspended for 180 days to allow talks to take place.

Rarely has an interviewee given me such an emphatic answer as when I recently asked the (now former) Secretary General of the Organization for Economic Cooperation and Development whether the new administration of President Biden had transformed the dynamics of the tax talks.

Angel Gurría, who stood down few days ago, told me: "Absolutely. The answer is completely, totally, yes".

Under President Trump the US was decidedly unenthusiastic about both "pillars" of the talks, the minimum tax rate and digital services issue.

On the latter, the Trump administration proposed something called a safe harbour provision, which Mr Gurría described as "some kind of optional take on the taxation".

Now the US is on board for both, though the proposed 15% minimum is too low for many campaigners' liking.

The G7 is not the forum when the final deal will be done. But the group's support, if they can make further progress, will give the proposals momentum and a real chance of being agreed.

Speaking ahead of the two-day meeting of G7 finance leaders, Mr Sunak said: "The G7 is a hugely important grouping and it's an honour to be welcoming my counterparts to London with a renewed spirit of multilateral cooperation."

"Even before holding the G7 presidency we've been clear on our priorities - protecting jobs, ensuring a green and global recovery and supporting the world's most vulnerable countries.

"Securing a global agreement on digital taxation has also been a key priority this year - we want companies to pay the right amount of tax in the right place, and I hope we can reach a fair deal with our partners.

"I'm determined we work together and unite to tackle the world's most pressing economic challenges - and I'm hugely optimistic that we will deliver some concrete outcomes this weekend."

The ministers will be looking at how to stop the likes of Google, Amazon, Starbucks and Apple paying low or no taxes in countries where they make revenues.

All G7 countries bar the UK have supported a proposal from the US for a global minimum corporate tax rate of 15% that could raise $50-$80bn for governments around the world.

However, the UK is holding out for reassurances about the Digital Services Tax, which levies 2% on revenues derived in the UK from online marketplaces, search engines and social media platforms.

The UK Treasury is open to the idea of a global corporate minimum tax rate and is said to be prepared to let the Digital Services Tax go if it obtains assurances that big tech will not simply be let off the hook.

The Biden administration initially pushed for a global minimum corporate tax rate of 21% but has now retreated to 15%. However, officials have said that's regarded very much as a "floor".

Finance ministers from the US, Japan, France, Canada, Germany and Italy will be attending the meeting at Lancaster House, along with representatives from the European Commission, the Eurogroup, the World Bank, the IMF and the OECD.

Mr Sunak is set to push his counterparts to follow the UK's lead on making climate reporting in the financial system mandatory.

Ministers will also hold meetings to discuss support for low-income countries and the global recovery post-Covid.