Rishi Sunak on Wednesday battled to prevent the storm over Sir Gavin Williamson’s resignation inflicting deeper damage on his Government as he conceded he “regrets” bringing back into the Cabinet.

Hours after Sir Gavin was forced to quit as a Cabinet Office minister over allegations of bullying, Mr Sunak was facing demands at Prime Minister’s Questions to provide a full account of why he had reappointed him as a minister.

As calls grew for Sir Gavin to lose the Tory whip, opposition MPs claimed the row reflected badly on the Prime Minister’s “integrity and judgment”.

Sir Keir Starmer branded Sir Gavin a “sad middle manager getting off on intimidating those beneath him” and a “cartoon bully with a pet spider”.

The Labour leader asked Mr Sunak in the Commons: “The member for South Staffordshire (Sir Gavin) told a civil servant to slit their throat.

“How does the Prime Minister think the victim of that bullying felt when he expressed great sadness at his resignation?”

Mr Sunak replied: “Unequivocally, the behaviour complained of was unacceptable and it is absolutely right that the right honourable gentleman has resigned. 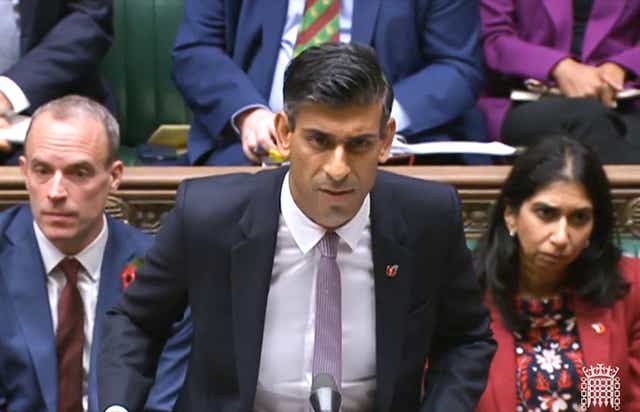 Rishi Sunak at PMQs on Wednesday
“For the record, I did not know about any of the specific concerns relating to his conduct as Secretary of State or chief whip, which date back some years.

“I believe that people in public life should treat others with consideration and respect, and those are the principles that this Government will stand by.”

The Prime Minister added: “I obviously regret appointing someone who has had to resign in the circumstances.

“But I think what the British people would like to know is that when situations like this arise, that they will be dealt with properly.

Sir Keir argued that Sir Gavin’s reputation as a “pathetic bully” was “precisely why the Prime Minister gave him a job”.

“What message does he think it sends when, rather than take on the bullies, he lines up alongside and thanks them for their loyalty?” the Labour leader said.

It comes as Mr Sunak is still under pressure over his decision to reappoint Suella Braverman as Home Secretary six days after she was sacked for breaching the ministerial code.

Education Secretary Gillian Keegan insisted today that the minister had done “the right thing” by resigning and defended Mr Sunak’s decision to bring back Sir Gavin, who had been sacked from government twice before.

“Gavin’s acted quickly, he’s removed the distraction,” she said. “I would expect after today that it won’t be discussed any further.”

But Labour and the Liberal Democrats turned up the heat ahead of Prime Minister’s Questions in the Commons at lunchtime, arguing for him to be sacked as a Tory MP.

Shadow foreign secretary David Lammy told BBC Radio 4’s Today programme: “I think this raises real questions about the Prime Minister’s judgment. The Prime Minister knew much of this, it was reported to him, why did he appoint Gavin Williamson to the Government in the first place?

“This is weak. It’s unacceptable. We really should have an account of why he came back into government.”

Lib Dem deputy leader Daisy Cooper added: “With such a clear picture of Gavin Williamson’s conduct as an MP, the Conservative party must act swiftly to condemn his actions and remove the whip.

“Every day Gavin Williamson continues to represent his party in Parliament raises yet more serious questions about Rishi Sunak’s judgment.”

Sir Gavin’s decision to quit as minister without portfolio followed allegations he sent expletive-laden messages to former chief whip Wendy Morton complaining about being refused an invitation to the Queen’s funeral.

He was also the subject of claims he bullied a former official at the Ministry of Defence and engaged in “unethical and immoral” behaviour while he was chief whip in Theresa May’s administration.

Announcing his resignation last night, Sir Gavin said the allegations were “becoming a distraction for the good work this Government is doing for the British people” and he was stepping back to “clear my name”.

He is believed to be facing at least three separate investigations into the claims: one by the Conservative Party, a second by Parliament’s Independent Complaints and Grievance Scheme and a third by the Cabinet Office.

Mr Sunak has been accused of ignoring the claims involving Ms Morton when he appointed Sir Gavin last month.

Former party chairman, Sir Jake Berry reportedly informed Mr Sunak the day before he entered No 10 that Ms Morton had submitted a formal complaint to the party.

On Wednesday the PM’s press secretary would not say whether Mr Sunak knew of the nature of the bullying claim against Sir Gavin when he appointed him.

Asked if Mr Sunak told by Sir Jake that the complaint in question concerned bullying and intimidation, she said: "I can't comment on the... details of private discussions.

"But he was made aware of the disagreement."

Pressed on whether he might have known the nature of the complaint, if not the details, she added: "It wouldn't be right for me to comment on complaints processes because they are rightly kept confidential."

She accused him of seeking to use an MP’s financial situation as leverage and sending an expletive-laden email about a female civil servant.

Sir Gavin was sacked by Mrs May as defence secretary in 2019 amid allegations he leaked details of a National Security Council meeting, and then by Boris Johnson as education secretary over the Covid-19 A-levels debacle.
#boris johnson  #covid 19  #johnson  #covid