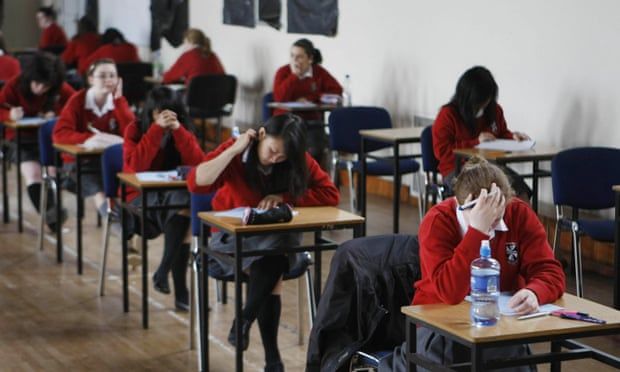 Students taking A-levels and GCSEs in England will be asked to sit repeated mock exams, after the exam regulator Ofqual told schools to test pupils throughout the year in case national exams are cancelled for the third time.

The regulator published its long-delayed contingency plan, detailing how teachers in England are to award grades by assessment in the event of Covid disruption making it impossible for formal exams to be held, as was the case in 2020-21 and 2019-20.

But the new plan B, endorsed by the Department for Education, was criticised by teaching unions and school leaders for being released so far past the start of the school year, and for creating a heavier workload for teachers and students having to prepare for assessments as well as final exams.

The contingency plan includes advice for schools to collect evidence in order to assess grades, with Ofqual advising that a “sensible approach” would be for schools to set formal exams once a term, starting before the Christmas holidays this year, and followed by others in spring and in the first half of the summer term.

Ofqual also advised that students should be assessed under formal exam-like conditions wherever possible, without knowing the questions in advance or having access to notes or textbooks.

But the regulator also warned against “over-assessment”, saying that the “total assessment time should not normally exceed the total time students would spend taking exams for the relevant qualification, plus any time spent on non-exam assessment”.

Julie McCulloch, director of policy at the Association of School and College Leaders, said: “These plans involve students having to sit a series of mock exams, which may or may not count towards their final grades, as well as then probably having to take formal exams next summer. This is far from ideal and places them under a great deal of pressure.

“But not having a contingency plan would risk a repeat of the chaos of the past two years, and therefore, on balance, this seems like the right course of action and the confirmed set of measures appear to be sensible enough.”

Both McCulloch and Mary Bousted, joint general secretary of the National Union of Teachers, were highly critical of the delay in finalising and publishing the contingency plan.

“The lack of urgency is shameful and an affront to parents, pupils and their teachers – all of whom needed to know, much earlier than today, how they would be assessed if the exam system fell over, as it did last year and the year before,” Bousted said.

In 2020, the government refused to create a contingency plan, leading to immediate confusion when A-level, GCSE and other national exams were then cancelled in January this year.
#covid
Add Comment