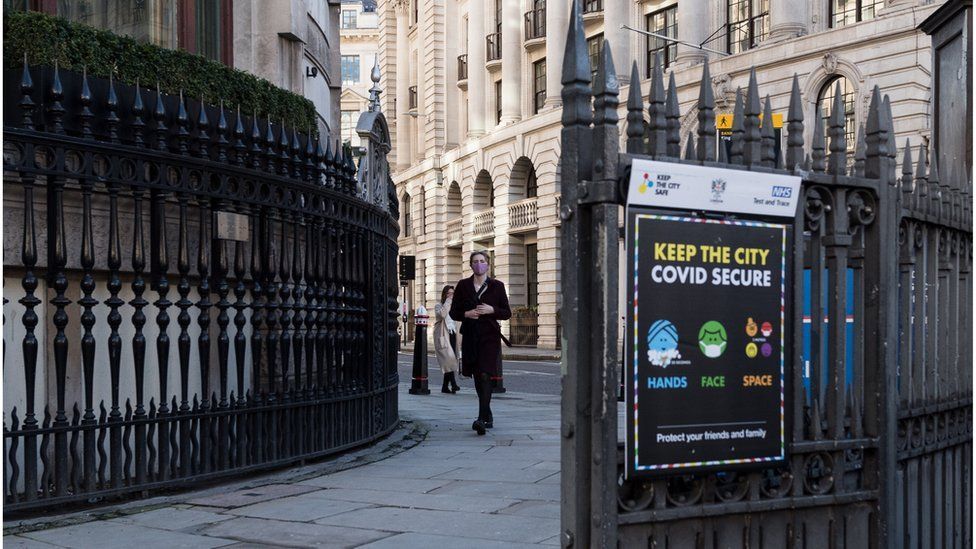 There has been a "strong decline" in levels of coronavirus infections in England since January, say scientists tracking the epidemic.

Imperial College London's React study found infections have dropped by two-thirds across England since lockdown began, with an 80% fall in London.

But virus levels are still high, with one in 200 testing positive between 4 and 13 February.

This is similar to levels seen in late September 2020.

Although these are interim findings, based on more than 85,000 swab tests from randomly selected people, they suggest social distancing and restrictions are having an impact.

Prof Paul Elliott, director of the programme at Imperial, said the drop in infection rates was "really encouraging".

It comes as Prime Minister Boris Johnson prepares to receive new data on the effect of vaccines on the spread of coronavirus, ahead of Monday's publication of a roadmap for easing the lockdown in England.

Speaking on Wednesday he said it was "absolutely right" to take a "data not dates" approach to leaving lockdown, and stressed England would ease measures "cautiously".

In Northern Ireland, ministers have agreed to extend lockdown restrictions to 1 April, although children in primary 1 to primary 3 (aged four to seven) will go back to school on 8 March.

Scotland's First Minister Nicola Sturgeon will make an announcement next week on whether some pupils will return to school.

The Welsh government is due to given an indication of its plans for coming out of lockdown on Friday.

A further 12,057 Covid cases have been reported in the UK, and there have been another 454 deaths within 28 days of a positive test. Last Thursday, 13,494 cases and 678 deaths were reported.

According to the Imperial College London team, during early-to-mid-February 0.51% of people in the study tested positive in England, down from 1.57% in early January. In London, positive tests fell from 2.83% to 0.54% over six weeks.

The study's author Prof Steven Riley described the fall in cases in London as "dramatic" and said there had been "a strong downward trend since January - better than many hoped for", which is equivalent to a halving of infections every 15 days.

The researchers estimated the R number - the average number of people one infected person will pass the virus on to - was around 0.72.

But more than 20,000 Covid patients are currently in hospital in the UK, and although new daily cases and hospital admissions are falling, they are still relatively high.

NHS England figures show 80% of critical care beds were occupied in the week to 14 February, a slight fall from 83% the week before.

There are just under 4,800 patients in critical care, with 6,000 beds available.

Prof Elliott told BBC Radio 4's Today programme: "Nobody wants to be in lockdown any longer than they have to be but a note of warning - the prevalence rates are still very high. They are as high as they were in September when they were on the increase and the numbers of people in hospital currently are at a level that they were in the first wave so we really have to be cautious."

While the virus is declining in all nine English regions, and substantially in the capital, South East and West Midlands, it is falling less steeply in the North West, North East and Yorkshire and the Humber.

This could be linked to tougher lockdown rules being introduced earlier in London and south-east England after a pre-Christmas surge in cases related to the more transmissible virus variant first discovered in Kent. 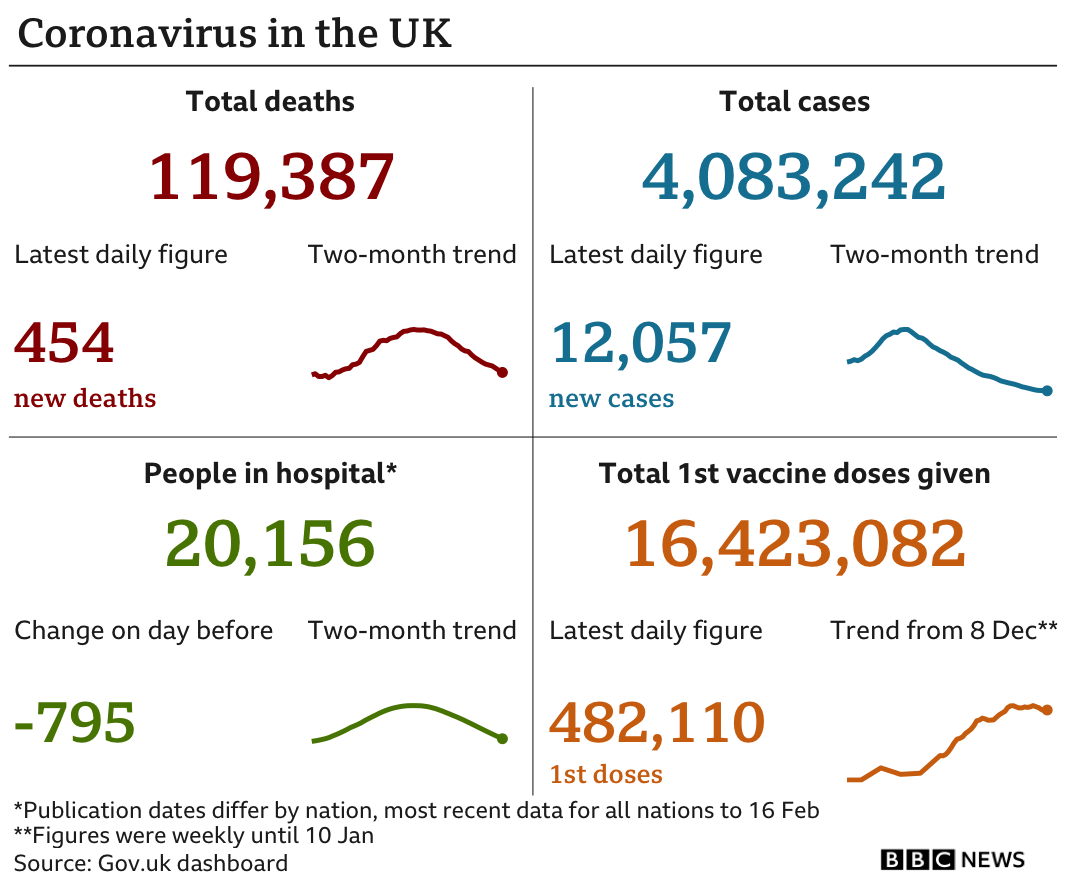 The React report found falls in infections across all age groups, with 18 to 24-year-olds and five to 12-year-olds currently having the highest virus levels - although still below 1%.

It estimates the over-65s have the lowest levels of virus at 0.3%.

More young children have been attending school during this lockdown than in the last one, which may have helped keep virus levels slightly higher in these age groups.

But the researchers stressed opening schools to all children was a high priority and there would have to be a "trade-off".

Dr Mary Bousted, joint general secretary of the National Education Union, said in a tweet that the results of the React study made "the strongest case for a phased reopening of schools".

A "big bang" reopening with the current high rates of infection and hospitalisation would "jeopardise full and sustained school reopening", she added.

The study identified groups that were more likely to test positive - including people of Asian ethnicity, those working in healthcare or care homes, people living in the most deprived areas and those in larger households.

Prof Elliott said the study had not seen an impact from the vaccination programme on infections yet, with all age groups seeing a drop in rates, but said the team would keep a "close eye" when it had an effect on transmission.

The researchers say signs may be visible by the time the final report is released in a matter of weeks, when a larger proportion of people will have been given protection.

The report is yet to be peer-reviewed or published.

*  It may be legal for companies to insist new staff are vaccinated, the justice secretary says