QAnon was split by Trump's 2024 announcement, with many followers believing it betrayed their deeply-held, baseless fantasies about election fraud.

When former President Donald Trump announced that he was planning to run for president in 2024, there was confusion and anger in the extremist QAnon community.

The QAnon conspiracy movement, which is based around the belief that Trump is secretly working to expose a cabal of Satan-worshiping pedophiles that run the world, has in recent years grown to become a part of mainstream politics.

While many QAnon believers reacted to his long-anticipated announcement with excitement, some voiced their anger, because it implied he was accepting that he lost the 2020 election – something he and his most ardent supporters have spent the last two years rejecting.

"Hey you guys, the elections are all rigged… But [vote] for me again! This is literally 1984-tier doublethink," one user wrote on 8kun, according to screenshots posted on Twitter.

The QAnon movement was already on the back foot. The midterm elections were a failure for the conspiracy theory movement, as dozens of candidates aligned with it lost their races for Congress and high-ranking state offices.

And in November the latest posts by the so-called "Q" on the forum 8kun were met with a lukewarm response.

All of this could be taken as evidence that the movement is losing steam. However, experts believe this is far from the case – and that it is simply evolving and changing shape.

"It's becoming much more mainstream and less devoted to the mythology of Q itself," Mike Rothschild, a QAnon expert who wrote "The Storm is Upon Us," told Insider.

"It certainly still venerates Trump, but a lot of people think Q itself was just a big dead end. The mainstream has embraced the conspiracy theories about the stolen election, COVID being a hoax, etcetera."

One in five Americans believe in the core tenets of QAnon

While it is hard to track how widespread belief in QAnon is, the nonpartisan Public Religion Research Institute published a study in February that found that nearly one in five Americans believes in its core tenets.

"Our surveys show that QAnon conspiracy theories are not losing popularity over time, despite their championed leader being out of power," said Natalie Jackson, director of research at PRRI, in a press release for the study.

The movement's feverish ideas have contributed to some radicalized individuals committing acts of violence, and others have had their families torn apart and their lives ruined.

Trump's role as a messiah-like figure has long been a key part of QAnon mythology. He has often winked to the movement, increasingly so in recent months, sharing dozens of messages alluding to QAnon on his social media platform Truth Social.

At a Trump rally in September, a song linked to QAnon was played while his supporters raised their index fingers in an unusual salute. 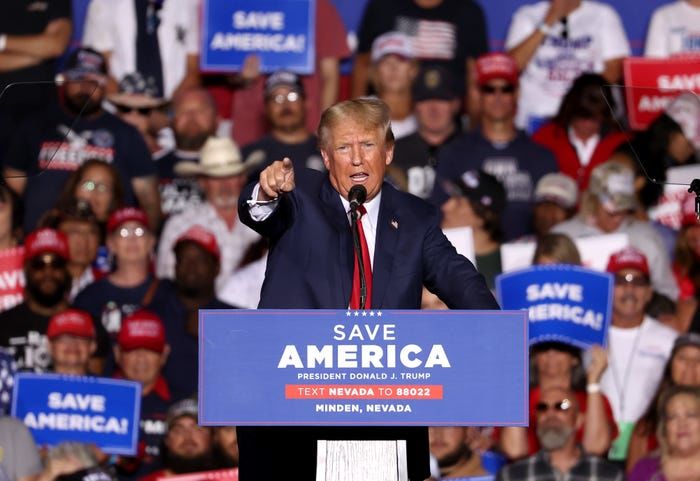 But following his announcement of a third presidential run, many rank-and-file QAnon believers voiced their unhappiness because of its implications for their election fraud beliefs. Moreover, they have long expected him to return to power through "The Storm," which would involve him spearheading a mass arrest of their political enemies and even executions of members of the "Deep State."

Although some are losing faith, some QAnon influencers seem to be throwing their support behind Trump and trying to stub out the bickering. One told followers: "This talk about being angry if he announces a 2024 run needs to cease."

"They're still devoted to him and still worship him as a god figure," Rothschild said. "But some influencers are a little less enthusiastic, essentially starting to give up on the idea of anything good ever happening."

"A few are angry that he's running in 2024 without 'fixing 2020,' as he didn't mention election fraud at all in his announcement. But every time big influencers get mad at Trump, they eventually come around, so they'll be all in on him again soon," he said.

To Q and beyond

The week of the midterm elections, three new "Q drops" appeared. These are cryptic online posts made by an anonymous person called "Q," who claims to be a high-ranking government insider with access to classified information.

The cryptic messages that sparked the conspiracy theory movement were initially posted on the forum 4chan and later moved to the site 8chan which has since been renamed 8kun.

While previous Q drops were met with excitement and flurries of posts from followers scrambling to decode them, the latest drops were largely met with ambivalence.

Fredrick Brennan, who founded 8chan but has since dedicated himself to exposing those behind the Q movement, told Insider that the reaction to the latestQ drops was comparatively "muted" following controversial drops in the summer.

In June of this year, the mysterious Q reappeared after nearly two years of silence. However, observers asserted that the new posts were likely written by Jim Watkins, who owns 8kun, or someone close to him, because of a technical change that was made involving the site's tripcodes, used to identify anonymous users.

People in the movement want action and arrests

Brennan, who previously worked closely with Watkins and his son Ron, played a key role in linking Watkins to the new posts at the time.

The father and son duo have long been suspected of being behind QAnon, but they have both denied it.

Another reason why the drops have lost their allure is the long periods of Q's absence.

"Q can't really sustain itself with a few drops every few months," Rothschild said. "And the new drops just have nothing interesting to say and are almost certainly being written or posted by 8kun owner Jim Watkins. People in the movement want action and arrests, not more cryptic questions and rhetorical nonsense."

The power of QAnon influencers

The momentum is now with QAnon influencers, who gained prominence in decoding and translating Q drops and have gone on to amass tens of thousands of followers.

High-profile offshoots include the group led by Michael Protzman, who goes by the username Negative48, and who led his followers to camp out in Dallas with the bizarre promise that John F. Kennedy would reappear. Needless to say, the assassinated former president never showed up. 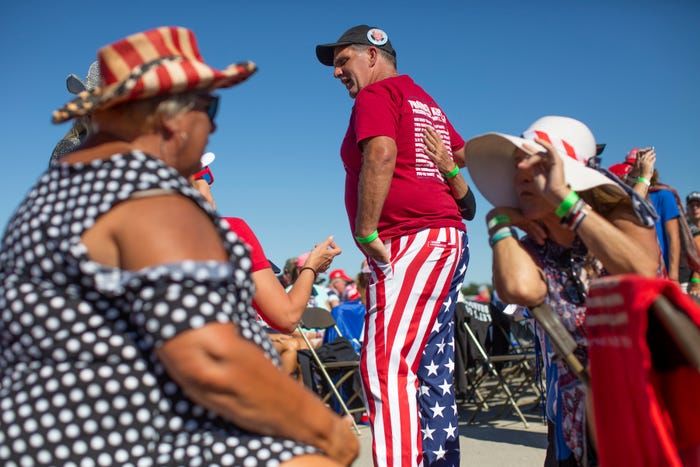 Michael Brian Protzman, also know as Negative48 and the supposed leader of a QAnon cult, talks with supporters before a rally for former President Donald Trump in Wilmington, North Carolina on September 23, 2022.

Many of these influencers act as interpreters and gatekeepers for their followers, picking and choosing which theories and drops they consider to be canonical and worth paying attention to.

Brennan said that he believes these influencers are enjoying the freedom and power they have in a post-Q world.

"They realized that they had a lot more power in a world without Q. In the past, influencers could lose thousands of followers overnight if Q said something that was against one of their pet theories," Brennan said.

However, Rothschild believes that many of the splinter groups like Negative48's are "too weird and outside the norm" for most believers to go along with. "It's all very much in flux without Q to guide the movement," he said.

It remains to be seen how the movement will respond to Trump's third presidential campaign and whether he will be selected as the Republican nominee for 2024.

Despite Q's predictions having not come to fruition, many believers appear to be undeterred in their faith – although it is unclear how long they will wait for the storm that never arrives.