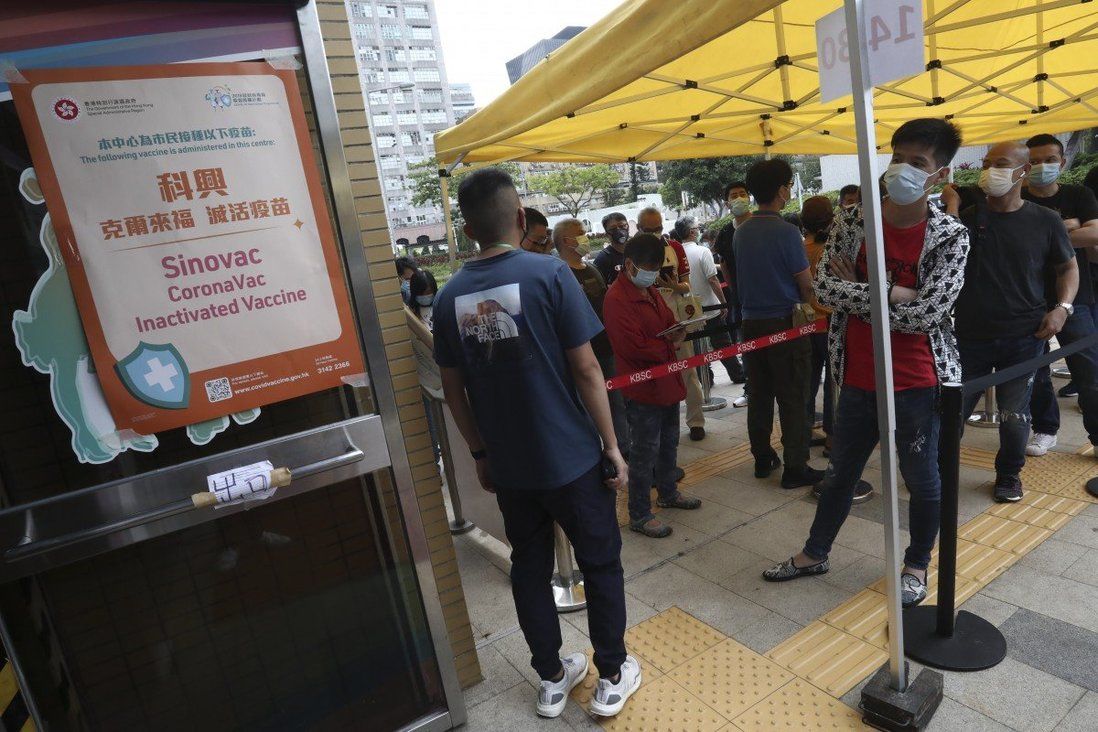 New data published by mainland scientists shows 70 per cent drop, but Hong Kong health experts seek to reassure residents and urge them to still get jab.

The level of protection offered by the Sinovac coronavirus vaccine dropped 70 per cent against the more infectious South African variant, according to data published by mainland scientists, but Hong Kong health experts on Tuesday sought to reassure residents that jabs available in the city were still effective.

One public health expert said in the long term the city could look into findings on mixing Covid-19 vaccines, which is being studied in different parts of the world, to see whether that might offer better protection against variants.

Hong Kong has been on the alert against the threat of coronavirus variants after a 29-year-old man was confirmed on Saturday to be the city’s first locally detected Covid-19 case with a mutant strain.

Health officials on Tuesday revealed the man was infected with the South African variant, known as B. 1.351, which could be about 50 per cent more transmissive than the original strain of the virus.

Government pandemic adviser Professor David Hui Shu-cheong said both vaccines available in the city, the mainland-made Sinovac jab and the BioNTech one from Germany, were less effective at fighting the South African strain.

“[Protection offered by] all vaccines dropped when facing the South African variant,” said Hui, who chairs the Centre for Health Protection’s Scientific Committee on Emerging and Zoonotic Diseases.

Citing data published by mainland researchers early this month in the New England Journal of Medicine, Hui said the level of neutralising antibody, which defends cells from infections, in the blood of those vaccinated with the Sinovac vaccine fell 70 per cent when fighting the South African variant, compared with the strain originally identified in Wuhan.

The level dropped 50 per cent for the variant first identified in Britain, known as B.1.1.7.

The laboratory study was carried out by examining blood samples from vaccinated people and those who had recovered from Covid-19, and looking at the reactions on variants.

The study involved 84 people, comprising those inoculated with either the Sinovac jab or one from Sinopharm, also made on the mainland, and those who recovered from Covid-19.

In other similar studies, the neutralising-antibody level in those who got the BioNTech jab dropped 90 per cent against the South African variant.

“But the level is still higher than the [effective] threshold and can still neutralise the virus,” Hui said.

Hui, a respiratory medicine expert at Chinese University, said he was not too worried at this point about the South African variant becoming prevalent in Hong Kong, adding timely diagnosis and treatment could handle the situation if the strain became widespread.

In the long term, he said, the city could look at studies on mixing different types of Covid-19 vaccine for the same course of inoculation and whether that could further enhance protection.

The University of Hong Kong was carrying out one such study. Hui said similar studies were being conducted between pharmaceutical firm AstraZeneca and drug makers producing mRNA vaccine, which uses a technology different from the jab produced by the Swedish-British company.

But for the moment, he urged the public to get a jab to stay protected.

“If more people get vaccinated, the chance of community outbreaks will be lower,” Hui said. “If there is an outbreak, the chance of mutation will be higher.”

Latest Hospital Authority data, covering March 22 to April 18, showed the chance of adverse events, such as death, stroke or a heart attack, among Covid-19 jab recipients was no higher than for unvaccinated people.

The actual number of adverse-event cases among vaccinated people was also smaller than expected, with the figures derived from deaths and disease patterns of different age groups in the past.

For example, an estimated 208 people in the vaccinated group were expected to die during the period, but the actual figure was six.

Hui said the two scientific committees under the Centre for Health Protection which provide vaccination recommendations on different groups of people were expected to meet on Thursday, and discuss issues including guidelines for pregnant women and those hoping to have babies.

As of Tuesday, 1,149,655 doses of Covid-19 vaccines have been administered for the public, according to information on the government Covid-19 website.