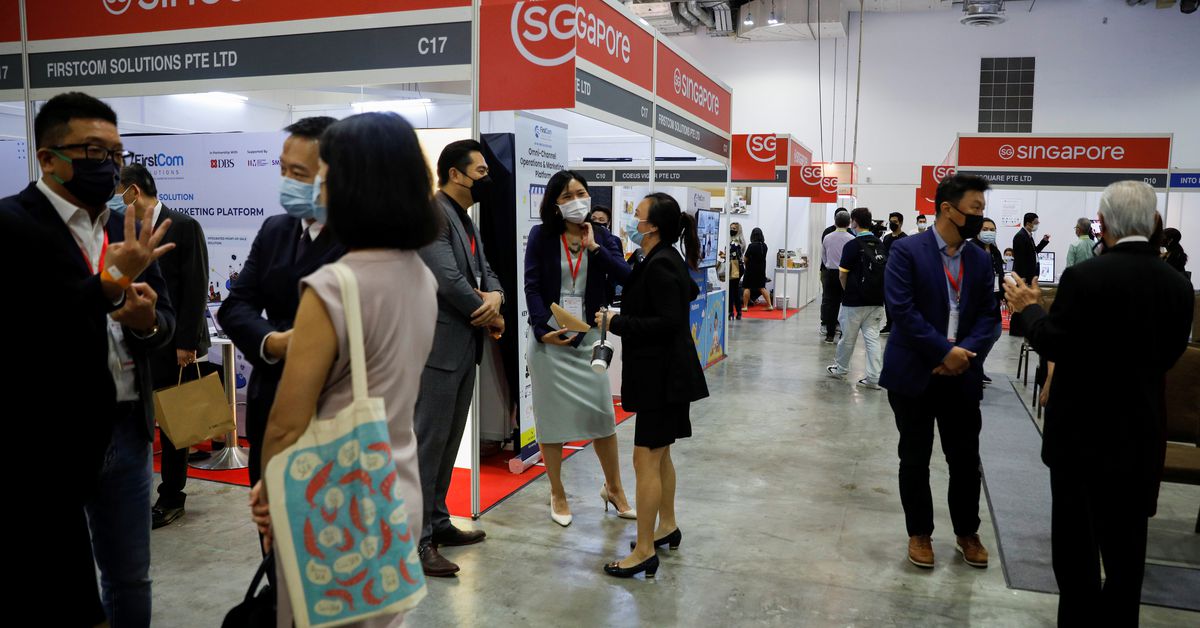 Singapore is hosting top executives of big global companies this week at a host of conferences, marking its gradual return to normalcy and underscoring the contrast with long-time rival Hong Kong, which is sticking with some of the toughest quarantine rules in the world.

Participants were allowed entry only after clearing swab tests and were required to wear masks and comply with strict safe distancing measures, though enjoyed relatively more freedom than the country's general population in terms of eating together.

The resumption of on-site events in the Southeast Asian hub comes as Singapore is allowing quarantine free travel to at least a dozen countries including Britain, France, Germany, Australia, Canada and the United States.

On Wednesday, UBS inaugurated the Swiss bank's largest office in Asia, an event attended by its chairman chief executive officer and others in the city-state.

"Things develop, things evolve but evolve fast here in Singapore. And even with the kind of semi lockdown situation that we are currently in, if you come here, you still feel the vibe," UBS CEO Ralf Hammers said.

Top officials from Goldman Sachs, HSBC, NYSE Group, Standard Chartered, Paypal and BNP Paribas spoke at the business events in Singapore, with many likely to be making their first trip to Singapore since authorities imposed restrictions early last year..

The two-day Milken event and an evening event by GIC was attended by about 550 people, including 150 overseas executives. The Bloomberg event had over 300 attendees, with 80% flying in.

Rooms at the plush 112-room Capella hotel in Sentosa island where a one-night stay costs at least $1,600 and which hosted the Bloomberg forum were sold out.

Later this month, Singapore singer JJ Lin performs at a two-day concert that organisers expect to be at near full capacity of about 2,000 people per night, the Straits Times daily said.

Over 100 exhibitors from 12 countries are participating in a food and beverages and supply chain event currently underway, with an international jewellery show and a martial arts event taking place in coming weeks.

Despite all this, compared to Europe, Britain and the United States, Singapore still has tight COVID-19 restrictions, with dining out largely limited to two people and mandatory mask-wearing in public.

Singapore's daily COVID-19 cases are hovering at more than 2,000 and the city-state still has strict restrictions on social gatherings, but with 85% of its 5.45 million population vaccinated, the government wants to open more for business.

Hong Kong has barely recorded any local coronavirus cases in recent months but the government hopes that its tight rules, including up to three weeks' hotel quarantine for visitors, would convince China to gradually open its border with the city.

"There's only a few cities where people want to congregate where you have that gateway of bringing global finance together and redistribute it. Hong Kong is one of those," BlackRock CEO Larry Fink told the Hong Kong FinTech Week earlier this month.

"I'm truly looking forward to physically being there in Hong Kong without a 21-day quarantine but that is a whole other story."