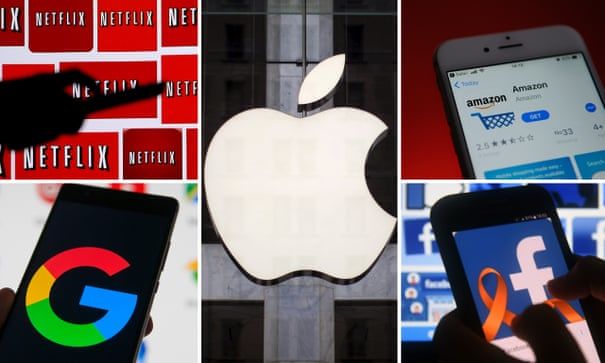 The giant US tech firms known as the “Silicon Six” have been accused of inflating their stated tax payments by almost $100bn (£70bn) over the past decade.

As Chancellor Rishi Sunak called on world leaders to back a new tech tax ahead of next week’s G7 summit in the UK, a report by the campaign group Fair Tax Foundation singled out Amazon, Facebook, Google’s owner, Alphabet, Netflix, Apple and Microsoft.

It said they paid $96bn less in tax between 2011 and 2020 than the notional taxation figures they cite in their annual financial reports. .

The six firms named handed over $149bn less to global tax authorities than would be expected if they had the paid headline rates where they operated, Fair Tax Foundation said.

Overall, they paid $219bn in income tax over the past decade, 3.6% of their total revenue of more than $6tn. Income tax is paid on profits, but the researchers said the Silicon Six companies deliberately shift income to low-tax jurisdictions to pay less tax.

Based on companies’ regulatory filings, the report found that Amazon, the internet retailing and cloud services provider run by the world’s richest man, Jeff Bezos, collected $1.6tn of revenue, reported $60.5bn of profit and paid $5.9bn in income taxes this decade. Amazon would have been expected to pay $10.7bn in taxes on those profits based on international tax rates, the report said. The tax paid as a percentage of profit was just 9.8% over the period 2011-20, the lowest of the so-called “Silicon Six”.

An Amazon spokesperson disputed the calculations as “extremely misleading”. “Amazon is primarily a retailer where profit margins are low, so comparisons to technology companies with operating profit margins of closer to 50% is not rational,” the company said. “Governments write the tax laws and Amazon is doing the very thing they encourage companies to do – paying all taxes due while also investing many billions in creating jobs and infrastructure. Coupled with low margins, this investment will naturally result in a lower cash tax rate.”

Paul Monaghan, chief executive of the Fair Tax Foundation, said the group’s analysis provided “solid evidence that substantive tax avoidance is still embedded within many large multinationals and nothing less than a root-and-branch reform of international tax rules will remedy the situation”.

The plan could be given the green light ahead of the G7 summit in Cornwall next month, according to Treasury sources.

Chancellor Rishi Sunak has said he wants President Joe Biden’s administration to sign up to a tech tax deal at the same time. “The right companies aren’t paying the right tax in the right places,” he told the Mail on Sunday. “That’s not fair and that’s something that I want to fix.”

Monaghan said Biden’s tax plans had “lit a fire” beneath the international debate on tax.

“The Biden-Harris proposals would see many of the incentives underpinning profit-shifting to tax havens removed, and would see the very largest multinationals taxed not just on where subsidiary profits are booked, but where real economic value is derived.”

Monaghan said global agreements on tax would have a “seismic impact” on the likes of Amazon, Apple, Facebook, Google and Microsoft, with billions of additional taxes paid across the world.

Facebook, run by Mark Zuckerberg, who has a personal fortune of $123bn, has paid just $16.8bn in income taxes this decade, despite making profits of $133bn and revenues of $328bn, according to the report. The tax paid as a percentage of profit was just 12.7%, the second-lowest of the so-called “Silicon Six” after Amazon.

A Facebook spokesman said: “All companies pay tax on their profits, not revenues. Last year we paid $4.23bn in corporate income taxes globally, and our average effective tax rate over the last 10 years was 20.71%, which is roughly in line with the OECD average.”