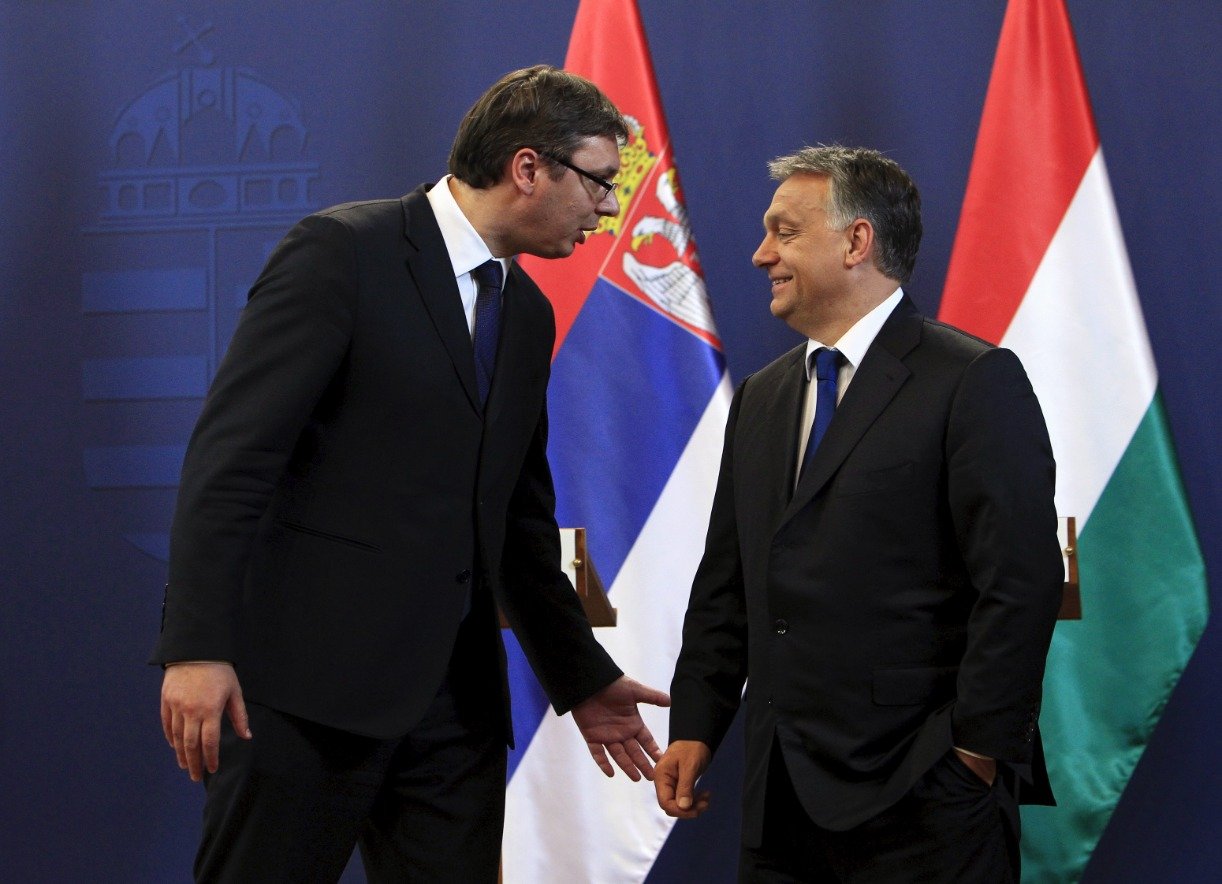 Serbia and Hungary: Illiberal Axis or a Confluence of Interest?

In the age when liberalism is in crisis, many governments feel free to find their own way of doing things that may have little to do with Western liberal thinking.

Serbian prime minister Ana Brnabić visited Budapest to meet her Hungarian counterpart, Viktor Orbán earlier this month. On this occasion, the two signed a strategic partnership agreement. Hungary became the seventh country with which Serbia has a strategic partnership agreement, after France, Italy, Russia, China, the United Arab Emirates, and Azerbaijan. The enthusiasm was high on both sides. “I have thought a lot about how I could summarise what was discussed at the meeting, and I think it is best to say that the two countries have agreed to rebuild Central Europe," Orbán stated. On the Serbian side, Brnabić noted: “The level of our cooperation, in addition to this strategic partnership, is evidenced by the fact that the Republic of Serbia, i.e. the government I lead, has not had such a large number of joint government sessions with any other country.”

Before signing this agreement, Serbia and Hungary had six joint government sessions, and Hungary has become Serbia’s third-largest trading partner, with trade expected to exceed two billion euros in 2021. In Serbian public opinion surveys, Hungary, alongside Greece, enjoys the highest trust among the Serbian citizens of all EU members, and seventy percent of the people rate Hungarian influence in Serbia as positive. These facts only speak of how much the relationship between the two countries was upgraded under Viktor Orbán and Serbian president Aleksandar Vučić. The upswing in partnership is easily justified with similarity in regime type. Both countries have hybrid regimes run by illiberal conservative parties in which the ruling party and its leaders play a dominant role. However, this is not the only reason, as this partnership is also driven by the shared concern over migration, the desire of two regimes to have international partners to avert international condemnation, and the shared political calculations concerning the Hungarian community in the Serbian province Vojvodina.

Regime compatibility is the first thing that comes to mind when one thinks about the potential drivers of this partnership. Both regimes of Viktor Orbán and Aleksandar Vučić are based on the dominance over media, judiciary, public administration and national security apparatus by the incumbent elites. In that context, the two regimes fit into what Fareed Zakaria called an "illiberal democracy," a regime combining electoral procedures and authoritarian methods of governance. Ideologically, the ruling political parties Fidesz, or the Hungarian Civic Alliance, and the Serbian Progressive Party (SNS) are national-conservative parties. Although SNS prizes its European People’s Party affiliation, Fidesz’s recent departure from the European People’s Party will not affect this relationship.

However, there are significant differences too. The first one is ideological commitment, where Orbán, an advocate of "Christian Europe," is much more stringent than Vučić. Naturally, this does not mean that there are no discrepancies and hypocrisies. Orbán is willing to combat the promotion of the LGBT worldview in Hungary. Still, his political ally former Member of European Parliament Jozsef Szajer was arrested in Brussels in 2020 for violating COVID-19 restrictions to attend a gay sex party. Orbán bashes the EU, but he has no problem using EU funds and projects to enrich his associates. Nevertheless, Orbán does have a political worldview.

Vučić, on the other hand is all business. The Vučić-led SNS party is in part made out of former nationalist associates of Serbian strongman Slobodan Milošević. However, Vučić needs European acquiescence to stay in power, and he needs to preserve a mirage of a progressive, can-do leader. While Orbán openly talks about making his country an illiberal democracy, Vučić and his allies blast Freedom House for designating Serbia as a hybrid regime on Twitter or for designating Serbian media outlets as state-affiliated. Vučić has no problem appointing Ana Brnabić, the first female and gay person, to the Prime Minister post and does not care that much about "Christian Europe." Within the Belgrade Waterfront, a major real estate project funded by the United Arab Emirates, Vučić unveiled a monument to medieval Serbian ruler Stefan Nemanja, holding a sword instead of a cross as originally planned. The Serbian media speculated that it was done to avoid angering Arab investors. Whatever the real motives for change in monument design are, it is difficult to imagine Orbán, with his political platform based on the notion of Christian Europe, allowing that change to happen on a national monument.

Therefore, while the regime plays a role in this partnership, it is evident that there are other factors at play. The first is migration which became a common denominator during the refugee crisis of 2015 and 2016. When Hungary and Croatia closed their borders, Serbia scored good reputational points for its treatment of refugees. The solidarity became evident as Serbia and Hungary were blasted by Croatia for allegedly redirecting migrants towards Croatia. While Orbán treats migrants as a threat to his vision of conservative, Christian Europe, Belgrade, alongside the rest of the Balkans, fears becoming the EU’s buffer for migrants.

With the Afghan crisis, the fear of a new migrant crisis is back. Greece has constructed a forty kilometer fence and surveillance system on its border with Turkey. Turkey is also fortifying its border with Iran. Croatian president Zoran Milanović stated: “It is no longer 2015.” Migration has been one of the rhetorical tropes during the signing of the strategic partnership agreement. As Orbán stated: “At the moment, it is not enough just to rebuild Central Europe, but we must also protect it, to guarantee the security of Central Europe. Developments in Afghanistan suggest a large wave of migration that could lead to a very difficult situation both for Hungary and Serbia. It is clear to us that those migrants do not want to live in Serbia or Hungary, but want to go to Western European countries, which means that if we stand in the way of migrations, we are also defending Western European countries, for example, Austria, Germany. That is assignment history, determined to us, not for the first time, that we defend Europe,” he claimed. The Serbian side will work with Hungary in controlling the migrant flows. While Belgrade will probably not use such theatrical wording, it is evident that the migration issue is a cohesive factor in this partnership.

Avoiding international condemnation is another cohesive factor. The two governments are always on the potential defensive regarding the rule of law in their respective countries. To push back, both governments are interested in creating a network of bilateral relationships that can counter attempts to bring them back into the fold, avert being condemned or isolated for not following EU’s mainstream agendas, all while enjoying a free hand in how they approach and conduct foreign affairs. This is why Orbán has become the main advocate for Serbia’s EU membership, something for which Vučić openly expresses gratitude.

Hungary likes the prospect of having Serbia in the EU, which would eliminate Hungary’s EU external border and add another ally to the list. At the same time, Serbia gets someone to lobby for its interests in Brussels. Belgrade might indeed believe that road to the EU leads through Budapest. On top of that, in September 2021, Vučić will be a guest at the Budapest Demographic Summit, where he will speak alongside Orbán, former U.S. Vice President Mike Pence, and the conservative Prime Ministers of Poland, Czech Republic, and Slovenia. Vučić and his government, to avoid losing international support, will try to build relations with both sides in the United States, with Republicans being the preferred option, while playing the already existing card of division between eastern and western members of the EU. Partnership with Orbán is central to this approach.

Lastly, the Hungarian community in Serbia is both a driver and an absolute winner of the improvement of relations between the two countries, which are often pointed out at a "historically high" level. The Alliance of Vojvodina Hungarians has been part of the ruling coalition since 2012; in a politically divided Serbia, they rarely produce conflicts or scandals but rather stick to "their departments" and are seen as a reliable partner to the SNS. As the Hungarian community in the northern Serbian province of Vojvodina is in a demographic decline, they can hardly present a threat to Serbia’s territorial integrity. Therefore, the Serbian government can allow Budapest to invest and sustain the Hungarian community. In return, Belgrade secures support from the Hungarian government and economic progress for the national minority whose political representatives are part of the ruling coalition. The Hungarian government gets nationalist and patriotic credentials for taking care of Hungarians living abroad: a win-win.

Orban’s government has financially supported several projects aimed at protecting or strengthening various aspects of Hungarian identity. Still, the one that has recently grabbed the spotlight is the construction of the TSC football club stadium—a lasting symbol of this new relationship and facility that Belgrade’s teams can "only dream of," costing upwards of twenty million euros. Orban has looked to sport, particularly football, to widen his support base and improve the country’s prestige internationally. By some accounts, governments led by him have invested over 2.7 billion USD in football-related infrastructure over a decade "to score political goals."
#afghanistan  #covid 19  #covid
Add Comment