Large indoor venues in England will be urged to check the Covid status of their customers on entry this summer, while prevalence of the virus is high, the health secretary, Sajid Javid, has announced.

Speaking to MPs, the health secretary confirmed the government’s plan on 19 July to lift almost all the remaining legal restrictions put in place during the pandemic, including those covering mask-wearing and the size of social gatherings.

But his tone was noticeably more downbeat than a week ago, when he told MPs, “freedom is in our sights once again”.

Javid told the House of Commons: “This is not the end of the road. It’s the start of a new phase of continued caution, where we live with the virus and manage the risks … as we make these changes, it’s so important that people act with caution and personal responsibility.”

He said people should “return to work gradually if working from home, meet people outside where possible and it’s expected and recommended that people should wear face coverings, unless they’re exempt, in crowded, indoor settings like public transport.”

The vaccine certification plan, in which venues will be “supported and encouraged” by government to use the NHS app to check up on their customers, was the most concrete sign of a change of tack.

A review of Covid certification had been carried out by the Cabinet Office under Michael Gove, but ministers had concluded previously that the scheme would not be immediately necessary, and should be held in reserve for the autumn.

Instead, with only a week to go until mass events in England will be allowed to go ahead, and venues such as nightclubs can reopen, the prime minister’s official spokesman said the government would be in touch with businesses to encourage them to implement Covid checks at the door.

Javid suggested customers could either show that they have been double-vaccinated, or had a positive PCR test within the past six months – or could carry out a lateral flow test and show the email they received after reporting a negative result. 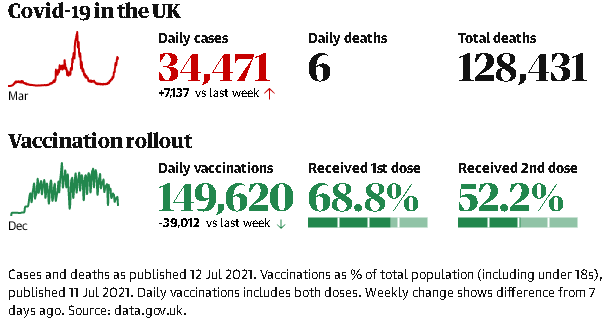 After he set out the details, some Conservative MPs pushing for a reopening suggested the government was still being too cautious, urging him to scrap isolation requirements for contacts of Covid cases sooner that 16 August.

But Labour’s Jonathan Ashworth, the shadow health secretary, accused Javid of failing to match his rhetoric on caution, saying he was actually “pushing his foot down on the accelerator while throwing the seatbelts off”.

Jeremy Hunt, the former health secretary and chair of the Commons health committee, also injected a note of warning, pressing Javid on whether “if the data deteriorates beyond what is currently envisaged he will not hesitate to take decisive action to save lives and head off the need for a further lockdown”. In response, the health secretary suggested some measures could be reimposed if necessary, despite the government’s hopes that its reopening is irreversible.

Javid said the government was acting “in a measured way” and had proceeded only because its four tests – on vaccines, hospitalisations, NHS capacity and new variants – had been met.

He said 19 July would be “a major milestone for this country, taking us another step closer to the lives we used to lead”.

But he conceded that infection rates were likely to get worse before they got better – potentially hitting 100,000 a day – but said the vaccination programme had severely weakened the link between infections, hospitalisations and deaths.

Javid acknowledged the risks of reopening further, but said his message to those calling for delay was: “if not now, then when?”.

He said the lifting of restrictions offered “the best possible chance of a return to normal life”.

The events industry is likely to respond with exasperation at being given such short notice to implement the scheme. The PM’s spokesman stressed it was already “up and running” because it had been tried at a series of pilot events.

Ministers have also underlined the continued importance of mask-wearing in all indoor, crowded spaces in recent days, despite the decision to lift legal restrictions.

And employers are being encouraged to act cautiously when it comes to ordering office staff back to the workplace. “While government is no longer instructing people to work from home if they can, we expect and recommend a gradual return to the workplace over the summer,” the spokesman said.

The 16 workplace safety guidance documents that advised employers on how to be “Covid-secure” are set to be replaced by six, slimmed-down sets of guidance, stressing the importance of ventilation.

The TUC’s general secretary, Frances O’Grady, accused ministers of “washing their hands” of workers’ safety, after the government failed to consult with trades unions about what should be included.

New guidance for the clinically extremely vulnerable, and how they should protect themselves as cases continue to rise sharply, is also likely to be set out in the coming days. Charities have warned that people with compromised immune systems may feel left behind.

And while formal restrictions on the size of gatherings will be lifted – ditching the “rule of six”, for example – the government is still expected to encourage the public to minimise unnecessary social contacts.

The fourth stage of Johnson’s unlocking roadmap, dubbed “freedom day” by Conservative backbenchers, was originally planned for 21 June, but was delayed by four weeks to press ahead with the vaccination programme, amid concerns about rapidly increasing cases.

Ministers have made clear they expect hospitalisations and deaths to increase as they press ahead with reopening venues such as night clubs, and lifting legal restrictions on social gatherings.

But they claim it is less risky to go ahead during the summer months, when schools are closed, than to delay, and risk overlapping with winter pressures on the NHS.

The impact of the unlocking plan will be reviewed in September. Johnson will give more details when he hosts a press conference in Downing Street later on Monday. His spokesman said he would stress that while restrictions were being lifted, “the need for caution and restraint is more important than ever”.